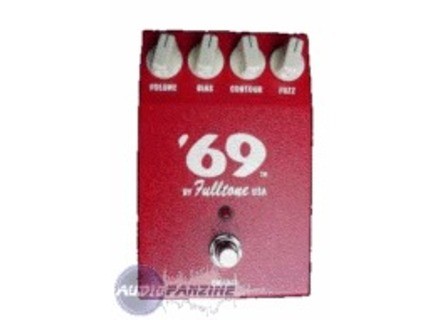 Fulltone '69
5
I will go ahead and say it...this is Jimi Hendrix in a box. Of course you will need a Marshall plexi reissue of something similar like a Germino Monterey and with out a doubt a Fender Strat. This thing sounds exactly as it reads on the cover of the box.....'69. It sounds exactly like something right out of the rock playbook from the late 60's and early 70's.

This is not a Big Muff thick chewy type of fuzz box. It is somewhere in between the Big Muff and a normal overdrive pedal. So you get a fuzz tone but on the thinner side and closer to a distortion box than anything. At least that is how i hear it in my ears. The is based on the germanium transistor chips.

It has four control knobs that do quite a bit of tweaking for your tone. A level, bias, contour, and fuzz control knob. A Contour Knob lets you dial in Midrange, Harmonics and Sustain, also an Input Bias knob adjusts the EQ and gives great Overdrive/Distortion sounds when its level is reduced.

This pedal is not intended for anything other than a Fender Stratocaster. Don't even think about hooking up a Gibson or anything else. Not really this pedal will sound good no matter how you like your guitar. However, I think for anyone even looking at this pedal they are trying to achieve a specific guitar player's tone. I think it sounds good in front of a Fender or a Vox amp, but it was made to slam a Marshall plexi or JMP amp. Plus you will need that Strat if you want to get that famous Jimi Hendrix tone.

This is a great fuzz pedal that is a lot of fun to play with. If you fare on the side of light overdrive style of germanium transistor fuzz pedals then you will like this unit a whole lot. If you want something straight out of Smashing Pumkins then you will need a Electro Harmonics Big Muff. The Big Muff will be a whole lot thicker and rounder. This pedal will drive your amp's front end more and add sustain and a light fuzz tone.

These pedals are now discontinued so you will have to buy one on the used market. The last time I checked the prices were around $450 on eBay.

Fulltone '69
5
There are four knobs on this pedal: Volume, Bias (which I think changes the voltage of something), Contour (basic mid-range shift), and Fuzz. True-bypass switch, in and out for instrument cables, and a power-adapter jack complete the picture. I don't recommend using a power adapter; the pedal will sound better with an old fashioned carbon battery anyway, and most power adapters will mess up the pedal because the transistors inside are reversed polarity in comparison to the electronics in, say, a Boss pedal.

The transistors are germanium (of course). This accounts both for how good the pedal sounds and for the fact that it has been discontinued.

Basically, you just put all the knobs on 12:00 and the pedal will deliver a growling push to whatever you're playing which, considering how cool and psychedelic it sounds, is surprisingly transparent. Sometimes, when I want more fuzz, I turn the fuzz knob up to about 3:00, but basically this thing sounds perfect with everything set to midnight. I'm honestly not sure why they bothered putting knobs on it at all. When something sounds this good you don't need to tweak it.

I will say, as a mild complaint, that it took me a while to figure this out. For a few months I was fiddling with the knobs trying to figure out what all the hype was about. Don't try to beat the thing into making &quot;your&quot; sound; just let it make its own sound. The sound it makes is fine, and pedals don't need to do a million different things, or even three or four, if they can do one thing really really well.

I have a lot of distortion pedals, including two other Fulltone pedals. I'm not sure why I have so many because I only ever use one at a time. Anyway, I have at least six or seven, and this is the one I use most -- more than half the time. As I said above, it's very transparent, which is a weird thing to say about a fuzz pedal, but it's true. The sound can get really fuzzed out, but at midpoint settings it's this perfect balance of the sound of your guitar when you play softly and the sound of snarling dogs when you play hard.

I've never played an actual 1960s Fuzzface, but I've played other Fuzzface &quot;clones,&quot; including some that are supposed to be much more faithful to the original, and this pedal just sounds better. The thing about fuzz tones on records from the late 1960s is that they have this weird mix of subtlety and outlandishness. Like it wasn't about making extreme fuzz sound, but the most interesting and unexpected one. This pedal gives you better access to that pallet of sounds and that whole way of thinking about guitar effects than any other pedal I've tried.

Maybe you want super high gain, or maybe you want an exact copy of some 1960s tone, and in that case you can do better elsewhere, but I'm pretty sure this pedal makes the sound that all those sixties garage bands were trying to get, even if what they actually got was different and equally good.

Fulltone '69
5
germanium fuzz with 4 settings, volume, bias, contour, fuzz and ability to act on an internal trimmer in a restricted range

pedal not as easy to use with many highly interactive settings. The examples given by fulltone is a good working basis.

I toured around the pedal which is exceptional sound reproduction when used with single coil pickups and an amp already Crunch. This refers to a technique used extensively by Jimi Hendrix, Eric Johnson and others. Oddly, the sound is at the top if the volume of the guitar is not his max but around 8 or 9. Belles also sounds if the key is used. I used a lot of fuzz shops but this one is my favorite even though Grandma has character.

At first I was disappointed with this pedal used on a clear sound because I thought she lacked gain. Using a saturated amp tilted me in the sixties with a single click. The model I use is old and difficult to find today.
Too bad because Mr Fuller was still hit hard with this model