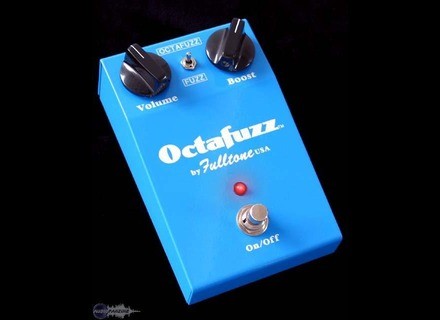 Fulltone Octafuzz
4
This is a really interesting Fuzz pedal by Fulltone. It has two modes, regular Fuzz and Octafuzz. There are two 1/4" connections, input and output, as well as a 9V adapter input. This is an analog pedal all the way, which means no computer or MIDI editing. And since it's a pedal, it's not rackable.

The editing on this pedal is pretty simple. There are two knobs and a switch. The first knob controls the level of fuzz. The second one controls boost, or how much your volume increases (or decreases depending on how it's set). The switch switches between regular fuzz mode and octafuzz, which is like the fuzz but a little gainier and with a faint trace of an octave signal in the mix there. This pedal is easy to adjust on the fly which I really like.

This pedal is a really great sounding fuzz. The regular fuzz alone would be enough for me, I think it holds its own with a lot of really great pedals. However, the Octafuzz sound is also really cool, especially for leads. It's not really the same as using and octave pedal and a fuzz pedal in tandem with each other, but it's a cool effect regardless. Most of the time I just use it for the regular fuzz, which is more than satisfactory. It ranges from a light texturizing fuzz to a growling, gnarly fuzz and everything between.

This is a pretty great pedal. It's not too expensive I guess, though there are probably other fuzzes in the price range that I would prefer, namely a good Big Muff. But there's definitely enough character in this pedal that would warrant enough people to prefer it over the Big Muff and other pedals like that. I think this is at least worth checking out, I recommend it.
Did you find this review helpful?yesno
»

You'll need a screw driver to replace the battery.

The only exact copy of the legendary Tycobrahe Octavia, but with one more octave.

Fuzz + Octaver OR Fuzz only.

It's plug and play!

I tested it at a store with a bass guitar and an Ampeg combo.

The sound is not so powerful as the a Big Muff. I mean, the Big Muff is like the diesel engine among fuzz pedals this Fulltone would be the gas version. There are also Formula 1 fuzzes, but that's another story.

All controls are effective and responsive unlike some products of other manufacturers.

It's rather expensive but it's worth its price!

The pedal produces 60's and 70's sound but also modern sounds!
Did you find this review helpful?yesno
»

0tom0's review (This content has been automatically translated from French)" incredible"

Fulltone Octafuzz
5
big fuzz + octave, all analog course.
input, output, volume boost, switch to the octave, and supply. Note that this same plug is reversed (+ center). the problem is that the weight of the pedal is on the + precisely therefore impossible to connect the pedal (with an adapter which reverses polarity) on a daisy chain with other pedals having a mass to -. therefore separate power supply or power supply required strip isolated 9v battery if bah ..

2 knobs, a switch, and that's all. the rest is done with the guitar.

this pedal is amazing. I use it only for the octave, with the boost and volume to a minimum 3/4.

the fuzz effect is very progressive in terms of the attack of the string. with a soft attack, the octave will really hear, with a larger attack, the sound becomes very fat, very fuzz, great everything. play two notes at the same time gives a ring modulator effect very compelling and interesting, especially on fast passages.

most videos of this pedal that I could find on youtube is content with the present boost bottom, so j'me would like to post one of my videos where you can clearly hear the octave and ring modulator effect in some places:

what I love about this pedal is the range of different sound that can be achieved simply with how to attack the strings. it is an instrument in itself. the quality is impeccable.

the only downside is having to add fresh food ...

Don_Viviano's review (This content has been automatically translated from French)" A very distinctive sound, big fuzz + octave above."

Fulltone Octafuzz
4
Well no notice has been made on this machine, I'll try to describe it.

Reverse polarity relative to a Boss or Marshall Classic (+ center). Therefore need to purchase a special transformer for the pedal, or a lil jack which reverses the polarity (4 €)
It is annoying, I see no point to it except to buy another + is like Proco and its special forms.

Setup is very simple. No manual on mine.

For use in my opinion preferably on a crunch sound (not clean anyway).

I played on a Bronx tube 12 (Fender HotRod equivalent) and a Laney LC 30 (the British), on two, large crunch.

I use only mode fuzz + octave.

The effect is powerful, a big fuzz invading from the fourth race of the volume pot (normal at the same time I go to a crunch). Its a pretty dirty and vintage with the octave like Jack White.

The sound, I do not know too describe me but it suits me, it's a big dirty fuzz and an octave above the note played, it gives a sense of fury in the treble, almost as if using a Wahmmy.

It has a nice ring modulator type playing serious on the mic the guitar a bit and lowering the volume.

Gaming agreement impossible (at least not with the octave).

I use it for a few months, I fell in love by chance by trying it.
I had never tried before octave, fuzz by some cons (FZ3 Boss, Zvex, You Dirty Rat ...) But it really does not even use.

A tad expensive if it is actually sold at 180 € as announced AF, but about 130 € c cool. This is not an effect that can be used all the time.
Only annoying thing, this polarity reversed.

I remake this unless I fall on another thing in the same style that makes it obsolete, but to my knowledge this is the only one that this.

See all 96 photos of Fulltone Octafuzz »