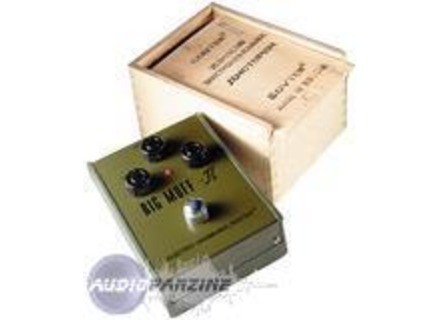 Electro-Harmonix Big Muff Pi Sovtek
5
Electro harmonics has really dominated the effects world with such high quality and great sounding effects pedals. They're probably most well-known for their Big muff pedals that have really been the standard for fuzz distortion in the music industry. These pedals have a nice thick rich warm fuzz tone that sounds fantastic any amp or even a clean amplifier. This is the pedal that it's basically the exact same title as the American-built big muff pedal but simply this one it was made in Russia.


The special comes with three control knobs just like the American version. You have a volume control, you have a distortion control which would've been the equivalent of the sustain in the American version, and then you have a tone control. What up is also interesting is the foot switch button is a little bit bigger and wider than your normal clickers of the boss pedals or any other type of MXR pedal or Electro Harmonics pedal.


The tone of this pedal is quite similar to the Electro Harmonics big Muff American-made pedal. It has the same gainy structure with thick distortion as you would see or hear. It does come in a sort of military looking box which is quite appealing to me in some respects. It also comes with a nice wooden box for the overall case. The tone is cool and the only fuzz pedal that I would ever use.


These pedals come in used at right at around $260. They are fairy expense and a lot more expensive than the American-built. These are very cool pedals and if you can find one at a decent price I would suggest just grabbing it because it's a cool collectors item as well. Otherwise i would just go with the American built version which sound basically the same for much less of a price. Not as military looking but the tone and sound is there.

Electro-Harmonix Big Muff Pi Sovtek
The Electro Harmonix Big Muff Pi (Sovtek) is a vintage distortion pedal.  It has 1/4 inch connections and is powered by either a nine volt battery or an Electro Harmonix power supply.  Compared to the newer American versions of this pedal, it has the pretty much the same characteristics, but this pedal is even gritter sounding.  This is an all analog unit and isn't rack mountable.

Use of the Electro Harmonix Big Muff Pi (Sovtek) isn't hard at all as the pedal simply has three parameters.  It has knobs for volume, distortion, and tone, which I believe are the same parameters that can be found on all of the versions of this classic pedal.  Even if you don't have too much experience with pedals, this is extremely easy to use and a manual really isn't necessary.

I've really got no complaints about the sounds that you can get from the Electro Harmonix Big Muff Pi (Sovtek).  It has a fat tone and is really down and dirty sounding.  It isn't great for getting a crisp overdrive, as it is pretty fuzzy and quite gritty.  It is a perfect distortion pedal for those who really love a fat distortion sound for heavy rock music or for those who want a really thick lead sound.  Even though it isn't versatile enough to be the only distortion pedal I use, I love this pedal because it gives me sounds that I really can't get anywhere else.

Overall, the Electro Harmonix Big Muff Pi (Sovtek) is a really impressive distortion pedal.  Its great for both guitar and bass guitar and even though this thing is pretty old, it can really crank.  The price is very reasonable and if you are a distortion lover, this is a pedal that is absolutely worth checking out.  Electro Harmonix is a great company and since pedals are their specialty and this is one of their originals, it really has a great vibe and overall tone to it.

Electro-Harmonix Big Muff Pi Sovtek
3
Three knobs: Volume, Tone, Distortion. A non-true-bypass footswitch. No power adapter jack so you must use a battery.

I should say that many pedals, in my opinion, don't need to be true bypass. Boss pedals, for instance, have a well-designed buffer stage so that sound quality is actually, if anything, enhanced by having the pedal in the signal chain but off. Anyway, this is not one of those pedals. Noticeable dulling of tone when the effect is not engaged.

Also, the shafts of the pots, to which the knobs attach, bend really easily.

It's hard to get a good sound out of this thing. Often the best results come from running two amps so you can mix the affected signal from one amp and the dry signal from another. In my experience this allows both for some clarity to be preserved so you can hear what you're actually playing and it also puts back the midrange frequencies that the pedal, when on, scoops out.

That said, in this application, this pedal has got me some really incredible fuzz tones that I've not heard anywhere else. I know I'm dissing it pretty hard right now, but, believe me, I have no intention of selling it. It has its place, and there's always going to be songs in any band that call for this particular kind of thick-fuzz-buzz-madness cocktail.

I can't really imagine using this live. The sound of the guitar when the effect is off just suffers too much, and there's no way you'd want your guitar to sound like this on every song.

Also, as I said before, when the effect is on, even though the quality of the distortion is great, there's this weird mid-range scoop that happens. Unless you're playing metal only, it seems like you want to have a mid-boost rather than a mid-cut when you turn the distortion on. I don't know, maybe that's just me. Anyway, the distortion has great boomy low end and sparkling high end fizz. Like -- I don't know -- carbonated molasses, maybe?

As I said before, I've found the need to overcome the lack of mid response and the sometimes muddy-ing quality of the distortion by running a mid-heavy clean sound on a secondary amp. This has given my one of my favorite fuzz tones in the studio. Whenever I record other guitarists I make them do a take like that, and they're always pleased with the results.

Everything about this pedal says Russia: Depressing pseudo-military aesthetics, shoddy construction, temperamental and ill-humored tone, and the vague sense that an AC power source constitutes a luxury reserved for others.

I also would not recommend gigging with this pedal.

But in the studio, I go back to this thing again and again. I'm constantly surprised at how good it can sound under the right circumstances, and how well the sound coming out of the amp, with nothing more than the usual SM57, translates to what you hear on tape.
Did you find this review helpful?yesno
»

Meur'saw's review (This content has been automatically translated from French)" a tool for studio ..."

and especially the bypass is horrible!

very simple ... the gain is there for show, not much difference ... the tone is efficient on the other hand, as the volume, the two are scheduled throughout the stroke of the knob ...

on -> perfect ... if you like that kind of grain, I used it mostly agree, it's big it's not super fatty but it's still pretty accurate right

off -> we forget! buffers are disgusting, it requires a true bypass mod or we reserve the studio

I note the fact as such, the lack of bypass was "punished" in characteristic

value for money at the time was really not bad, I can not remember the original price I paid at the time but it was really cheap too ... the quality of its "off" is so bad as to be unworkable elsewhere in the studio ...

I keep it, despite its price in 2nd hand outrageously high, because it's a classic ... and I do not exclude the change and to reinstate my set-up ...

Here again I can not simply ignore the bypass for the rating ... So ...

Did you find this review helpful?yesno
»
Read the 9 user reviews on the Electro-Harmonix Big Muff Pi Sovtek »