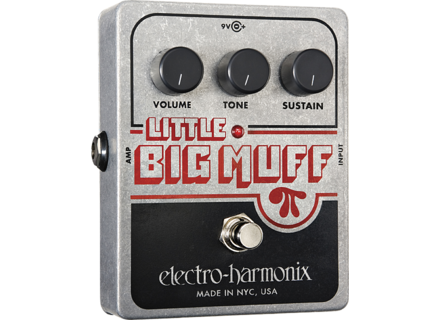 mooseherman's review"All the Big Muff Power in a smaller pedal!"

Electro-Harmonix Little Big Muff Pi XO
5
This is a (physically) smaller version of the legendary Electro Harmonix Big Muff Pedal. It is a heavy fuzz and sustainer, a unique combo when the Big Muff was first introduced. This pedal's larger predecessor became legendary after being used by David Gilmour and Jimi Hendrix, amongst many other, newer players. It is an analog pedal through and through. There are no excess connection types other that the 1/4" input and output, as well as the input for a power supply (sold seperately, unfortunately). This isn't rackable of computer/midi capable.

This is a really easy pedal to use, just like the original. There are three knobs, Sustain, Tone and Volume, all of which are rather self-explanatory assuming you know that sustain is virtually the same as compression. There is really no need for a manual.

When I first saw the Little Big Muff, I assumed that it was a less powerful, cleaner pedal than the original (whatever that means anymore) Big Muff. I later tried one out and was actually really surprised. This thing sounds very much like the Big Muff Pi, and has minimal differences from the larger ones that came out in the same year (2000). This is a supremely dirty, powerful fuzz pedal. It's great for really rocking rhythms. Some people complain about leads, I tend to either switch pickups and increase volume on the guitar or even use a boost of some type to get a better lead sound with it. When you have enough clarity and high end, you can really make this pedal sing!

This is a perfect way to make the Big Muff easier for most people. If you're crowding your pedal board to make room for your big muff, you might want to think about this alternative as you'll suffer virtually no tonal differences. The price is totally worth it for the killer tone.
Did you find this review helpful?yesno
»

The Electro-Harmonix Little Big Muff Reissue has the most basic parameters for a distortion pedal possible.  You've simply got parameters for sustain, tone, and volume.  The sustain is awesome as it really does add a whole bunch of sustain to your tone, which is overall probably my favorite part of this pedal.  Unless you are an absolute beginner, I don't think that you need to have the manual to figure out how to use this pedal.

I have used the Electro-Harmonix Little Big Muff Reissue in the recording studio mostly with a '76 Fender Twin Reverb combo amp and a Fender Stratocaster.  I'm overall very pleased with the tones that I'm able to get within this configuration and with this pedal in general.  It definitely is a Big Muff as it has the same exact circuitry and make up of the reissue of this pedal that is a bigger.  I love how thick of a distortion tone that you get with this pedal, both for rhythm and lead parts.  Although a lot of people will use this for rhythm and chords, I generally use it for lead sounds as I really like the way that it fattens up my sound.

If you're looking for the Big Muff sound, but don't want to spend too much money, the Electro-Harmonix Little Big Muff Reissue is a good way to go.  While the regular Big Muff reissue isn't all that more expensive, but I kind of like having it so small as it makes it easier to fit on the pedal board, as the larger one does take up a lot of space.  I'd encourage those interested to check out the full line of Big Muff pedals, but this one is definitely a good choice.

I chose this pedal primarily as a compromise between the Big Muff and the Nano Muff. The Big Muff is just too... big, and I honestly don't understand why the pedal has to have such a large housing. The Nano Muff only has a volume control, and I wanted to be able to tweak the sound. But I really feel that the Little Big Muff is no compromise at all, more like the best of both pedals, and it seems deceptively flexible.

Some people have complained that it adds too much low-end. While I do tend to keep the tone above 12 o'clock, I feel there is plenty of room for adjustment, and it might be more about the amp they are playing out of; my tube Peavey Classic 50 makes this pedal sound a bit less bassy than my digital Peavey KB-60 keyboard amp (but surprisingly enough, I feel that this pedal sounds good through both of them).

I was inspired to try an EHX Muff pedal when I heard some of the gritty fuzz tones coming from Jack White's guitar on the DVD &quot;Under Blackpool Lights.&quot; It's extremely easy to get a very similar sound with this pedal and variations on it. Perhaps this pedal IS a bit more bassy than the regular Muff, but someone searching for Jack's sound is probably better off with this one, because I feel some of his low end is probably coming from that hollow-body Res-o-Glass Airline guitar, as they tend to &quot;growl&quot; quite a bit. But most people don't have an Airline.

Anyway, to me this pedal sounds &quot;full,&quot; so I'm not complaining at all about any perceived amount of low-end. It's got a sound that I like a lot.

There's no real manual to speak of. The instructions that come with it give a basic overview, and the gist here is that if you plug in an AC adapter, it must be outer-ring positive (like most pedals). EHX didn't supply an adapter with it, but they did include a battery. I've got mine plugged into a Voodoo Labs Pedal Power 2 Plus.

It's simple to use by just adjusting the three knobs. The volume, tone, and sustain all seem to have the ability to affect the sound, which is a good thing, because it gives the pedal quite a bit of versatility. I just love the sound I get from it, and it's hard to come up with a combination of settings that doesn't sound good. It does seem to get a bit too bottom-heavy with the tone control set low, but if you like fuzz, it'll be easy to get a satisfying sound out of this pedal.

In my opinion, it's a perfect combination of simplicity and versatility. Very easy to use.

&quot;Sound quality&quot; is an interesting metric for a fuzz pedal. As I said before, I love the sounds from this pedal. It trashes up the signal very nicely, though inevitably there will be people who do not like it for one reason or another. I was actually a bit shocked by how much I liked the pedal. It sounds a lot fuller than the overdrive box I have. I thought maybe the pedal would be redundant seeing as how I had two other fuzz pedals as well. But this pedal seems to have its own character, and a significantly different fuzz sound than the two Effector 13 pedals.

I play a Switch Wild One (single bridge humbucker with coil tap), an Eastwood Corona (SG clone, with excellent Eastwood humbuckers), and a modified Squier Strat through this and the rest of my pedals, and each guitar has some subtle differences that can be heard. It sounds good with all of them. It even cleans up a bit if you put an overdrive after it, but I'm not really liking much of the sounds I'm getting from my overdrive. A Boss DS-1 would probably be more to my taste than the AMT Du Hast pedal that I have now. But that's not the Muff's fault.

My favorite guitar, as far as sound from the Muff is concerned, is the Eastwood Corona, and it sounds so good that I often leave the other pedals turned off. However, a new addition to my pedals is a BBE Sonic Maximizer, and this makes the Muff sound even fuller. You can almost sort of adjust the tone of the Muff even further with this pedal. So while I liked the sound of the Muff by itself, I tend to leave the BBE on at all times.

I've been using this pedal for a while, mostly playing with the settings and jamming with it. I like to adjust it because of the many variations it can produce. It's fairly quiet, even with the sustain turned up, but adding distortion behind it can highlight some of the background noise (one of the reasons I like using it by itself). The only real problem with this pedal is it can sometimes create such a wall of sound that it loses clarity in chords and such. I think this pedal shines best when played with 3 strings or less, which helps the individual notes come through. But I'm not complaining.

I think I paid $65 for this pedal brand new, and for my satisfaction of the sounds I'm getting, it's a ridiculously good value. I wouldn't hesitate to make the same purchase if I had to. There will always be people complaining that they can't get an exact sound out of a pedal, and for those of you looking to chase a sound of a particular artist, that may very well be the case. I don't know, because I'm not much on chasing a particular sound. I bought this pedal because I wanted something similar to what I heard Jack White playing. I'd say I got it, and I'm more than satisfied with the sounds it can make.
Did you find this review helpful?yesno
»

The Little Big Muff is proposed to unnecessary ridiculously low price, so to deny it even if, a priori, it is not necessarily the fan as it gets! I personally have always been a fan, the Big Muff has been my first pedal acquired over 35 years ago now! So finally amazing, I think she is better now and it really pointless to spend triple for a vintage model 70's.
It is now much more versatile because it allows the game rhythm (the sound made was just mush on early models). But where it excels, as in the past, it's good for solos. This pedal, as everyone knows, I suppose, offers endless sustain even at low volume and creamy tones. Whether with a Les Paul or a Stratocaster, it never belies its warmth making it a cheap alternative to the Dunlop Fuzz Face. It reacts quite well to the volume knob on the guitar and even offers a crunch sound really nice and original. Of course, it can not substitute for a true overdrive (MXR, in my case) but this is somehow not what it is. No, Little Big Muff love charged sustain leads, gorged saturation, the furious flights but also lyrical and melodic solos (cuckoo David Gilmour: Here the pedal must be associated with a phaser and a compressor for the solo "Time").
Sensitive and progressive settings allow large variations and sculpt his sound is a breeze. Of course the knob "Sustain" turned fully will certainly need a good Noise Gate, but it is the lot of all high gain pedals and it does not snore as other distortions.
The Farication suffers no negative criticism, at least if you do not mind the boxes a little "as forged". The switching effect is noiselessly.
This pedal is part of the history of modern music, so do not forget to do this, you also part of the story for just one euro fifty!

Did you find this review helpful?yesno
»
Read the 25 user reviews on the Electro-Harmonix Little Big Muff Pi XO »