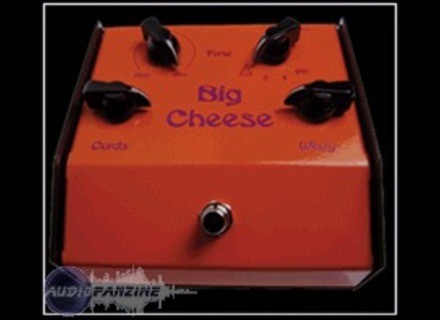 Lovetone Big Cheese
5
The Lovetone Big Cheese is a thick and heavy fuzz pedal for electric guitar. The pedal was made in the UK and is made up of all analog components. It's got 1/4" jacks for input and output and has a 1/8" style jack for a nine volt power supply (I'm not sure if it also has a battery option). It isn't going to be rack mountable since it's a stomp box.

It's not too hard to use the Lovetone Big Cheese once you know which parameter does what, as they have rather ambiguous names for the controls to go along with the "Big Cheese" joke. It's got knobs for "Curds," which controls gain, "Whey" which is for volume, and two separate tone knobs one of which is a traditional tone knob and one of which gives you four different (including bypass) tone settings for further sculpting the sound. A manual shouldn't be necessary as long as you know what each parameter does...

The sound of the Lovetone Big Cheese is pretty awesome to say the least. It should definitely be considered mostly a fuzz box since it's really got a lot of gain, noise, and kick to it. However, between all of the parameters it's definitely possible to get a wide variety of different sounds ranging from more subtle overdrive to full on heavy fuzz. I think it works best when you turn the gain and volume up, which results in a really dirty and noisy distortion sound, but a lot of it's charm comes in the fact that it's definitely not a one trick pony.

While very expensive, the Lovetone Big Cheese is a top notch fuzz box to say the least. If you're after a huge, dirty fuzz sound and price is no object, the Big Cheese is going to be one of the best options available to you. However, most of us interested out there aren't going to be able to afford this as it's really quite pricey. It's probably not worth this amount of money, as you can get a lot of different quality pedals for the same price as this one. Having said this, if you're a professional looking for an awesome fuzz box, the Lovetone Big Cheese is an outstanding pedal!
Did you find this review helpful?yesno
»