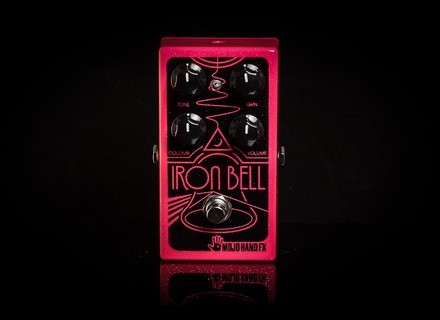 pask30's review (This content has been automatically translated from French)" Slap! Gilmour is here and more"

Mojo Hand FX Iron Bell
5
Fuzz pedal very well thought out, built like a tank, a pink sequined a nice effect with 4 buttons settings "tone", "gain", "volume", "color", the first 3 act much on sound, is also the 4th but it is much more subtle. It is true bypass. An input and output jack and a power input 9V.Je put the score of 9 for no rubber pad which it rests even the floor.

Like any other pedal 3 or 4 buttons, it is simple to use, there is no manual comes with. I put the note 9, a small manual adjustments with a few tips would be welcome.

The effect is fantastic, but those who like the Hendrix fuzz will be disappointed, this is not a fuzz drooling everywhere, far from it. Want an idea of ​​how it sounds, listen Pinf Floyd (solo Pigs three different one example or the first part of the solo money). It is said that this pedal is "Gilmour in a box." Ben frankly it does and there or what is most interesting is that this is the case, even at low volume in his room. It seems that this is a kind of clone of the ram's head big muff, ca I know, I've never heard this pedal live, so I do not pronounce me on this point. Some for my current tests, you can also flirt with the sounds smashing pumpkins. In short, it is versatile. I tested it with a jackson sl3 and a Fender Strat CP60. I like with the 2 but my preference is for use with my CP60 but now I'm influenced by the fact that this is the guitar I prefer between the two, so the pedal has nothing to do with what last point. I put 10, ca long time I was looking for this sound.

I use it for a few hours but I did not need more to know that I'll keep. I tested some fuzz in my life, I bought a big muff finished lack of means but the size, power and especially the fact that I could not go near the sound of my Master David Gilmour on was due to the latter. You can use all the knobs in the most extreme settings, it's still clean, it sounds. It is not given as pedal are found to almost half the price but it is no comparison. Boost there with overdrive and there is huge sustain madness, ca feedback but it's still controllable, it is very simple, I have long wanted to play the song "sorrow" (version DSOT or Pulse) Pink Floyd and I finally arrives. CP60 Strat. What I like least is that the LED activation is very strong and it has no rubber pad to stabilize. If your reference is rather fuzz face type, go your way, you will be disappointed.