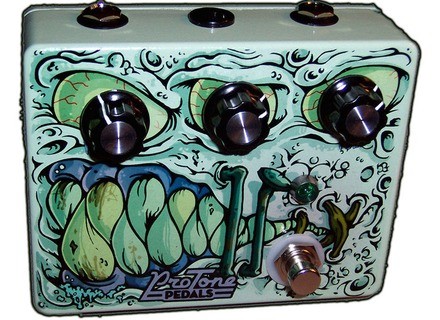 zonzonzon's review (This content has been automatically translated from French)" its name, it is good!!"

Pro Tone The Monster Fuzz
5
fuzz is a brand created by Protone Effects.
it has 3 knobs:
-Volume: that rule ... volume!
-Tone: the tone for (the very serious to very high), but also act on the grain effect. not a single button classic tone that is found throughout all the fuzz, it really act on the grain!
-Fuzz: regulates the level of saturation.

the pedal is very solid, and a mouth of hell (this is the case to say ... lol!). I really like the finish very neat and original paint, well damn.
9 volt standard power supply. Two jacks: one input and one output, one may be located too close to the PSU, but I quibble

Swiss chard is rather confusing at first because the knobs interact with each other, so take your time to find his ultimate death that kills. but set no matter how it sounds anyway!
the manual ... What manual? frankly, we are not needed.
comes with a cloth top with stamped "proton". nice to clean up the effects of the pedalboard.
I branch in the loop with my NS-2 because, even it it blows too .. ba she blows anyway! (Like all the fuzz and distos is inevitable but entirely correct for the amount of gain it issues).

important note: I use it on LOW!

so there! the fuzz monster is aptly named!!
amateur big muff, fuzz face fuzz and other "classic" is found everywhere, é bé go your way, because it's a totally different. the grain of its own and is the only able to get out. despite its very distinctive sound it is quite versatile, you can have a fuzz very serious (too serious, maybe?) to the contrary, a very sharp fuzz, but not garish. the ton, as said before, change and more of the tone can be a grain of the pedal. I can not describe with words, one must hear to understand ^ ^.
the knob "fuzz", it allows at least its race to have a big fat overdrive, then to 3 / 4 of the race a great fuzz, rather smooth, a bit compressed. then in the last quarter of the race, the sound begins to disintegrate, to "bleed" and become more and more uncontrollable. it's great: D! grain makes me think the sound of fuzz geranium. In any case, regardless of the settings, this pedal is great!!

remember that I use on low. it does not lack at all serious, Frequency converter and low pass perfectly. it's simple, I love!

I use it for several hours.
I go to my favorite retailer and loved me proposed the fuzz, I knew not. it's simple, I tested it, and I fell in love! a stroke of lightning.
I wanted to avoid the "must" and "classic" that everyone has. now I'm ready!
I really like: the sound in general, especially the grain of its own, finishing neat, his mouth not possible.
I like least: the price ... and yes, 199 euros for a fuzz it hurts, and yet, my dealer gave me a price (it was 219 euros at the base). but apparently it must be the money to think outside the box and fall into original effects. So let's say it's worth

unfortunate that this brand is not known in France and there is very resellers can in our beautiful country. because this brand is really worth. but, that said, time better for me because it could not become a must in France and I would be one of the few to possess p hahaha!!

A switch and three buttons whose settings interact with each other, turn the knobs and try out different settings

Super impressive in the kind big fuzz ... recommended for those who do not like fuzz, and for others too, it's a very special type of fuzz, very far from the standard kind of fuzz face tone bender etc. ...)
Great tone, very dense, highly accurate, it can play chords and AC runs smoothly unlike a lot of fuzz (which are limited to power chords or leads).
The headroom is good and even at the bottom there is very little wind.
With the tone can range from a severe hyper fuzz that is green with envy smashing pumkins fuzz to a very acute (but without being too noisy).
With the gain is almost zero of the overdrive, fat anyway, and the bottom is the big sound.

We know why you use it, not just the top grain and original, but in addition it goes where most other fuzz stop, we can play very very nasty, and the remaining very clean (a perfect weapon in live or studio who wants to fuzz without affecting the intelligibility of the group).
Very good value for money, a design without fault, and a sound that distinguishes it from others (even if not the most versatile fuzz)
Did you find this review helpful?yesno
»

See all 6 photos of Pro Tone The Monster Fuzz »

Other names: the monster fuzz, themonsterfuzz