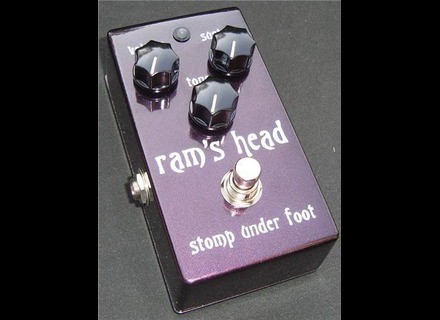 Stomp Under Foot Violet Ram's Head
5
Inspired by a 1975 "VIOLET" version of the Ram's Head this classic fuzz is mostly associated with David Gilmour's tone on Pink Floyd's "The Wall" but also a great, all-around fuzz for any style.

What caught my attention about this pedal is how clear and articulate it is especially for rhythm and chords. It doesn't have a big bottom end compared to the other muff version but still is good enough for chords and leads.
This pedal has plenty of gain on the tap. If you're concerned how this one performs in a band context, don't worry because it cuts in the mix pretty well.

If you have to choose one in Matt's selection. I suggest you get this one.
Did you find this review helpful?yesno
»

With this 3 knobs , it's very easy to use this stompbox

I use many guitars with many pickups (humbucker, single coil, soapbar), and it's great with all.
Of course you can have very thick and gainy rythm guitar sound (very powerfull if you need), and first of all, the pedal is a must in the lead territory (Gilmour, Santana, RHCP for exemple), very responsive, very articulate

It's great to have a piece of legend (ram's head copy)
This is one of best fuzz i've ever used, it's agood choice for all the big muff's fans...
Did you find this review helpful?yesno
»

Stomp Under Foot Violet Ram's Head
5
This is a Fuzz, Big Muff inspired "Violet Ram's Head".
Analog pedal handmade in the USA.
3 knobs Volume, Sustain, and Tone.
9V power outlet, but it is also possible to power by battery.

For Fuzz, I do not see anything else to add, everything is there.

Easy to use.
Knobs react gradually.
The pedal feels solid.

For testing, I have to open it to a battery.
The assembly is very neat and clean. It gives confidence!

I bought it to play covers of David Gilmour.
I never had the opportunity to play a real Big Muff Ram's Head, the comparison stops therefore only samples.
But the result seems to be high: it is hot, it does not bleed excessively, pal evil gain ...
The specification is completed!

The Big Muff vintage are expensive, very expensive, too expensive.
Stomp Under Foot pedal that can afford a piece of legend, for a reasonable price.
It is also the most accessible Fuzz, if I had to keep one, it would without doubt that there ...
The price is reasonable for the handmade, especially when the result is this.

Note that Matt is very friendly and responds quickly to emails.
I would have also booked a Civil War ...

Like all "big muff" Under Foot Stomp, there are three buttons (volume, gain tone), so no need for a manual or he should go see a doctor.
The race of the buttons is very gradual, and is usable from a to z. or 0 to 10 (it depends).

Based on a Big Muff version ram's head (the latter is based on a model 1975) is a very hot fuzz, creamy, with lots of gain.
The sound is loaded into the grave without ever becoming too grotty.
This pedal is great for leads (sounds Gilmour, santana, red hot chili peppers etc. ...), it is quite thick, creamy, perfectly responds to attacks, and is very articulate.
To the rhythm game, it is also very effective in a book mainly rock, it can send the sauce with powerful guitars and the bass with nice headroom.

I have for some time now (I was so amazed by the opamp to stomp Under Foot, that I was interested in another of his pedals), and has remained in my hands (unlike many other fuzz I ' I have tried over the years and I sold).
It is a very good value for money, a very good choice for those who want a funky fuzz for leads but also very effective in the rhythmic register.

We can afford a slice of legend, even when we speak of the ram's head big muff ... without breaking the piggy bank and also without the risk of falling on a medium version
Did you find this review helpful?yesno
»

See all 16 photos of Stomp Under Foot Violet Ram's Head »

Other Stomp Under Foot fuzz pedals