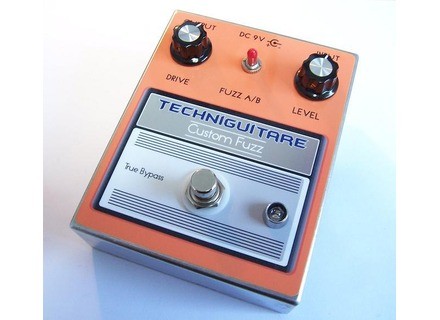 kip'on's review (This content has been automatically translated from French)" Génialissime."

According to its designer, is an inspired version of the Axis Fuzz Roger Mayer. Also improved, because it has a selector for choosing between its axis and a cleaner sound, transistors instead of silicon germanium (it ages better, it seems), an LED and a DC 9v.

For the rest, it is the same: setting of fuzz and volume, a true bypass, an in, an out is partiiiii!

No frills, one branch at fouzz donf, it manages the volume and intensity with fuzz guitar.

I was a little confused at first, perplexed (bright amp with switched, yuck, it's ugly and garish).
Come on, you set a minimum, I turn on the bright amp, fuzz thoroughly and will set the volume pot from scratch.

A 4 on the volume of the stratum, we get a clear sound slightly soiled. Pleasant surprise, the pedal has a treble boost in the midrange very nice, it brings a great dynamic sound.

We climb a little volume, direct agreements distort, it starts to get really dirty, so a little garage rock.

At bottom, it's beautiful to cry. That fat, dirty, slimy, but still pretty sweet as saturation. It was REALLY hendrix sound (which does not prevent us to play something else too!). An example of sound being better than words, I'm cooking it as soon as I can save!

Is a pedal for beginners in DIY (very easy to mount, printed circuit wide, just to be with a minimum and be a bit patient), but you can buy it already assembled If the weld is not your thing.

The Roger Mayer is pretty well-shaped spaceship, but pay € 200 a foot, it hurts. I paid my € 45 Custom Fuzz, casing drilled more than welding.

I tried a lot of fuzz, MXR Silicon Fuzz, the Swollen Pickle ... fuzz good, but expensive.
The custom fuzz is a godsend. Besides the satisfaction of having hacked my first DIY pedal, the ratio q / p is unparalleled.