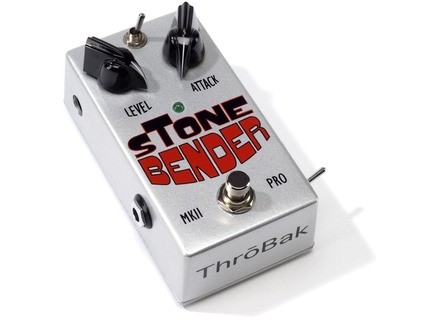 Throbak Stone Bender
5
Pretty simple. It's a fuzz od. What more needs to be said?

Pregain switch adds tons of gain, a bit too much with my setup, so I usually have it off. But it's nice to know it's there if needed. Attack knob adds gradual fuzz tone. I keep the Level know near full on. Frequency filter switch is useful for cutting off possible RF interference (radio stations, etc.), but I usually keep it off. The tone is scary. I call this the 'Jimmy Page in a box' pedal as this is the missing ingredient I've been looking for.

The sound quality is superb hats of to Jon. Not only does this nail the early zep sound and beck among others..But , it's not just for copying others tones it has sooo many possibilties. Flipping the pre gain switch off realy gives you a nice fat sound. As far as the color switch I dont have a treble problem so i dont use it. I use my tone knobs. real nice sparkle to growling fat fuzz is what this pedel gives me. Roll back the volume knob and it cleans up perfect. Sounds awsome with a slide too. I play a 2000 les paul classic (replaced 500T with a burstbucker3 in bridge), a 1994 epiphone les paul standard( '57 classic plus in bridge and modified bride so I can use a violin bow, lol), and a 1987 made in japan strat. thru the new vox V847A wah, Thru a 70's morley (tel-ray) pro phaser PFA foot pedal( look it up its cool vintage effect), thru the stone bender to a marshal TSL602. Sometimes I add my mxr blue box in the mix too. Also, since i live in a apartment I also run the effects to a pod 2.0 thru the effects loop ( sounds awsome especially on the plexi model

when i cant crack the amp itself. Its a little noisy when attack and level are all the way up, but, less noisy than any other od/distortion I have ever tried. And, does not get in the way of my sound and make my other effect noisy like my boss sd-1 did. Works great with my analog effects and the pod. Semms compatible with anything. I dont see any weaknesses with this unit. Notes sound better , bends everything. I never liked the sound i got just running through my amp w/o the pod. Now i love it with or w/o my pod.

This is a fantastic vintage/classic rock/garage rock revival pedal for fuzz and overdrive. Black Sabbath, AC/DC, Zep, The Who, The White Stripes, Guns 'N Roses, etc., it's there. It has complexity with great note definition. It's not really for metal and isn't meant to be. I've been playing almost 10 years and have become more and more a Jimmy Page fan over the years. Having listened intently to his playing in an attempt to emulate him (I definately have nailed his occassional sloppiness

, I'm convinced that this pedal is a must for that sound. I can't play without it now...the ProCo Rat, Rangemaster copy (Retroman Beano), and MXR Wylde Overdrive have all taken a back seat for now. It can be noisy but it's authentic and has all that mojo you'd expect from a pedal that speaks the sounds of those great years of early blues rock/hard rock.

2 buttons, two switches (a pre gain, switch tone color that removes some acute), a bias to calm down a bit serious, practical, depending on whether you're playing in single or double coil
The bias could be available on a knob ... but hey, it's cool to have added

Great sound, usable on any type of plan (rhythm, lead etc ...), beautiful tone color, the pedal responds very well to the game volume, far more than most Tonebender MKII, the sound is always defined, articulated very good stuff ... this pedal.
The gain range is very progressive, you can use the pedal with an amp that already has the drive, or putting a lot of gain on the pedal, you can also play on a clean amp

One of the best MKII tone bender on the market, small adjustments are really top

KirKill's review (This content has been automatically translated from French)" Bender cheap ..."

This is vintage that's what I was looking for, we find this fuzz with this particular character who made his first album of Led Zeppelin whole lotta love to immigrant song through the Stone with satisfaction or other frankly in the noise ... this was very characteristic of the middle Bender has nothing to do with the Fuzz Face is much more in bass ... There also crading this side that gives it its charm and its grain of time, then we like it or not, I'm a fan
I am not using the pre-gain too saturated for my taste the switch tone color is very light as an option I find not useless but not quite frank the collar

I nabbed at 150 € secondhand is no regrets when you see the reissue of JMI to 398 € calms very quickly larfeuille for comparing the two there is still a small difference with a big price difference lol
I will also talk about the Fulltone SoulBender MKII and EWS Fuzzy Drive, the EWS has nothing to do so to forget very quickly and when the Fulltone it to sound more modern for my taste is not bad but I do not find the vintage side so much Led Zep bit disappointed especially to 199 € the pedal is the only market available Bender ... damage
Pedal purchased for import by the owner and I do not separate myself so for the fans of Tone Bender if you find the Throbak Stone Bender, you know what you have to do ...