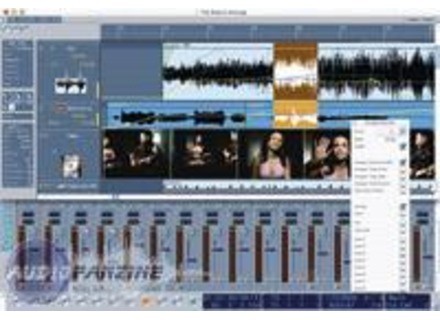 Logic Platinum 6, General Sequencer from Emagic in the Logic series.

Blue Bird's review (This content has been automatically translated from French)

Emagic Logic Platinum 6
5
- Installation no problem, it's all the same on Mac o)
- The loss of the benefit of the VSTi AU (that's fair) has not been without shame Collateral. I find myself compelled to buy the upgrade of a plugin 1.x to 2.x, UA rdige time o I notice is the almost perfect but it does dveloppeurs are not yet, you sometimes use third-party applications to convert VST to AU to be able to use some outl. This does not make me put that 7
- Unlike the legends, Logic is far from being a gas plant agrees to forget that Cubase and make the effort to read a little doc. However the Logic Potential to become a true gas plant, see NUCLEAR fission. And it's one of the pleasant aspect is that you can configure its environment Manir powerful studio.
- The manual is quite clear, and more than enough to see too. Judge for yourself: I buy Logic 6.0 a few months after its official release, and I end up with the doc in French Logic 4.0 in a large workbook that is dated 1999 Exceeds 1000 pages. The Installation Guide for Logic Audio 5, 100 pages, The LAP5 Reference Guide, which is 250 pages January 2002, an Addendum to this reference guide, 200 pages, and logic 6 is a simple Addendum 70 pages in English from January 2003. A 900 EUR for a full version, I admit that I have prfrer a single doc, rather than three generations. It's a bit of foutage of mouth. But at least it proves emagiC wanted the right end for a long time Logic.

- I'm running Logic on a G4 Dual 1.25, with an RME DIGI96, 1 ​​GB RAM
- LAP 6 does not rotate, it is in orbit, the sky septime on this config, I can not imagine what was given on a G5
- I would not refer to the performance because when I mix of short films such as the config is more efficient too, when I run 4 large session in Reaktor plugin, the system is knees. Also my logical unit of work is a couple of hard drives in RAID. Let's just say that this config has never dcue and logic it like a charm.
- However, I would change all that. Indeed, in my case, is super stable Logic, Reaktor 4 runs perfectly in stand alone, but some preset reaktor uncert in logic are planted in logic, it seems that the problem comes from the cot instead of Native, but not n It is really clear.

- I use Logic Platinum 6 for 9 months, and I just say that the bb is doing quite well.
- What I like most is the logic of Logic. It is a war bell as slip or caleon, vis vis Cubase. What I like least is the rigidity of the interface and its colors. Which is completely secondary.
- Before making my choice on Logic and the Mac, I work with Logic 5 on PC, Cubase SX 1.0 on PC and Samplitude 6 on PC. DEFINITIONS In Logic silent the software that I felt best. I regret not having more searches Digital Performer, because it seems good too trs. However, the fact emagiC belongs Apple leaves a prsager intgration faster, the new platform (while Motu shown more than once to a certain slowness in upgrades) .
- The ratio quality / price seems honorable, but remains litiste like all Apple products worldwide, as its competitors
- Clearly yes. My couple Logic Audio / Logic Platinum is the heart of my studio, and I do not see change right away. If THE FIRST approach may seem complex (and may be less intuitive for those who do not know the sequencer), APRS some learning curve, you feel capable of dcrocher the moon.
Did you find this review helpful?yesno
»