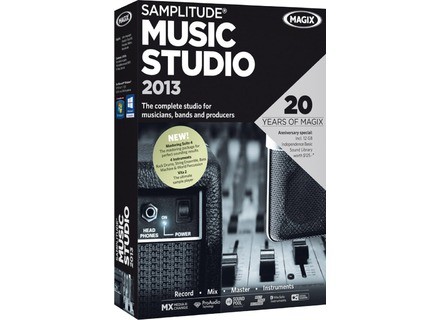 Magix Samplitude Music Studio 2013
5
Windows 7 64 bit no problem but I think it is usable under XP and now Windows 8
No installation worries and independence comes with a software synthesizer sound very interesting and readable as
There are tutorials on the net and forums to really exploit the advantage though is that it is a German product entirely in French and a sequencer that is significant because it is already complicated as that for to add constraint
It is now many years since I've been with for Magix music and video software and frankly not disappoint at all.

In terms of performance info I would say that it runs on everything but it is true that more should be a dedicated PC for recording and only that.
It will avoid crashes and especially rowing you understand me what kind of software does not necessarily demand a lot but that is recorded directly and the track builds up we always add something a riff or other well c is that the machine must be effective as desired.
A wise course.

Personally I use and makes a cd (come see me for information if you are interested I put video sound but also I think if I have another.
I think the operation is intuitive and French moreover very good product I recommend to all
There you can also convert your music to mp3 prefer another trick from thee else in its operations.