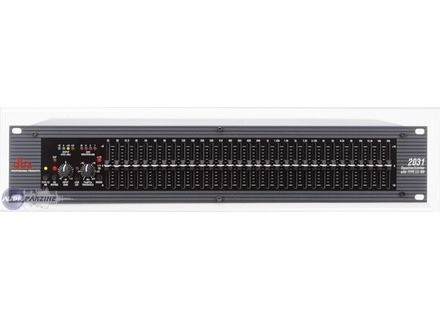 dbx 2031
4
The Dbx 2031 is a stereo graphic equalizer, each channel containing 31 bands of equalization. In addition to a stereo equalizer, it also has a limiter and type III noise reduction, which is a patented Dbx type of noise reduction. Each channel has XLR and 1/4" inputs and outputs as well as speaker connections. It is in rack mountable form and will take up two rack spaces.

Using the Dbx 2031 isn't very complicated, as everything is straight forward and easy to follow. Beyond the 31 bands on each channel, there are parameters for input gain and threshold (for the limiter), and buttons for bypass, low cut, and for the type III noise reduction. It also has a button to choose the range, which can either be +/- 5 or +/- 15 db, which is definitely a useful tool. I haven't seen the manual so I can't say anything about it's make up, but I don't think that one is necessary anyway.

Overall, the Dbx 2031 is a very clean sounding equalizer suitable for uses of all types including in the recording studio, in a live rig, and even for home stereo systems. I however have only used it in the recording studio, but it definitely has the versatility to be used elsewhere. Having the type III noise reduction on here is a big plus, as is the limiter, as it really makes it a versatile piece of gear. In fact, I would bet that most people would be using the 2031 in a live setting because of this versatility.

Dbx is a leader when it comes to graphic equalizers and other signal processing, and the Dbx 2031 is a combination of a lot of different elements that Dbx has to offer. While I'd only get this if you're looking primarily for a graphic EQ, and not because of the other features, these other features really add to what the 2031 has to offer. Because of these extra features, the Dbx 2031 has a leg up and should definitely be checked out.
Did you find this review helpful?yesno
»

dbx 2031 manuals and other files