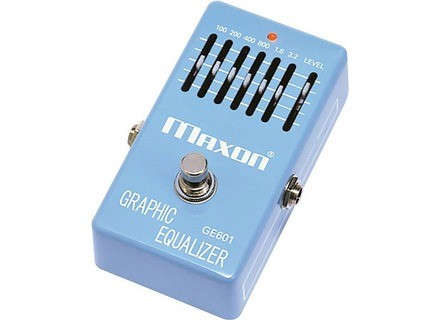 Maxon GE601 Graphic Equalizer Reissue
5
The Maxon GE601 is a graphic equalizer pedal, intended for use with guitar. It's a six band EQ and can also serve as a booster. It's an analog pedal that has the standard configuration of a 1/4" input and 1/4" output and is powered by a nine volt power supply. It's not going to be rack mountable as it's a stomp box.

Using the Maxon GE601 is very simple. It has six sliders for six different fixed frequencies, starting at 100 Hz and going up to 3.2 Hz, with each band being double the amount as the previous. There is also an overall level output slider. That's more or less what you need to know here, so I don't think a manual is crucial.

The Maxon GE601 has a great sound that is extremely precise. It doesn't take much to alter the tone with each of the frequency bands, so don't feel like you have to crank or pull the bands by too much. It's great for getting rid of unwanted low end guitar rumble or for adding some brightness and using it as a booster. I like it better than the Boss and MXR graphic EQs that I've used before as it just seems to sound cleaner and only add to the harmonic worth of your sound.

While I'm not of the school of thought that you need to have a graphic equalizer in your chain, I can definitely see the worth of the Maxon GE601. It's great to have some extra control for your sound, but for me I'm usually okay the EQ on my amplifier and the tone knobs on my guitar. Still, this can be very helpful if you use it right. I don't know that it's as useful inside the studio as it can be for live shows, unless it's really part of your sound. It's not the cheapest EQ guitar pedal out there, but it's definitely up there with the best.

Maxon GE601 Graphic Equalizer Reissue
4
So it's a 6-band Equalizer
As for its technology, better refer to the Maxon site to me. It is rather well done although englais.

The configuration is simple, the manual is clear and there are examples pretty much done.
No problem to connect the pedals Maxon is written over which side to put the guitar and amp that even I'm not very smart I understood everything.

I do not know if I use it correctly. I found my amp too serious and therefore I used to boost the bass and treble cut. For this I found impeccable. My guitar teacher has also tried and showed me the stuff you can do with it. He seems to do very well also set aside ... balèze enough breath when you push the beast

I have since Christmas. It is exactly what I asked in my little home but I am afraid that if I found a group it is quite limited because of the breath.
I have been offered as (Father Christmas if you read me ...) So value for money unbeatable.
If I had the choice again, I will take more time to try others and maybe ... MXR an example ...