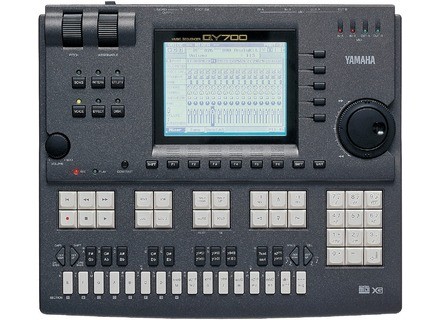 QY700, Groove Machine from Yamaha in the QY series.

Jmm061048's review (This content has been automatically translated from French)

XG sounds are, a little be useful but there is nothing to climb trees
some patterns are really excellent plant
if like me you do not program the percussion parts you will find your happiness, there are really enough to make

I use it for five years
I rvais night and day since its release but too expensive c'tait
I finally change against some of my old stuff
I do not use more work for the guitar, but I'm with the reader long rgal noon for this purpose
I do not use it for composing, programming is quite Młoda galre, what chance we have to have computers
I use it now as yard noon, it's perfect for my setup PC + 3 synths
I can use it also for some percussion sounds like analog drums that do not lack personnalitbr /> I also did soundtracks instit demand for performances of children based patterns of plant and the bote agreements and c'tait perfect for soundtracks karaokbr /> I use it every day and I can not do without
one touch shows a weakness ...

drguet's review (This content has been automatically translated from French)" Machine complte explore in depth ..."

Machine all in one, twelve o'clock squenceur tense XG, MIDI player, arranger and midi interface 2 in 2 out, the three manuals are clear and must remain door hand for sysex mostly sheer black.

In the era, the XG sound module taient trs good. This is typical trs 90, but with good will we can push the BTE in the techno playing on the filters, modulations, effects chaining only accessible via sysex (that is complicated but rewarding).

Machine unbreakable, well constructed and intuitive (except for shipping sounds), and an excellent squenceur drive south, a good arranger and instantaneous Available from a computer.

Remains a provision to drive and a floppy drive on pc usb.

Yamaha QY700
5
The connector on the MIDI sequencer trsdveloppe. There are 2 MIDI Out. The ability to assign the Controller are virtually endless. Only one pair of outputs Stereo is not - but we know what we want: the QY 700 is certainly one of the best hardware sequencer of the market. The sounds are pure GM (slightly flat, I think ...). With a capacity of 110,000 notes, the operating system takes in an instant the lighting of the bte. The QY 700 sequencer is typically a home-studio fans scne will be due. In a 32-note polyphony, it is the central focus of my home studio. It is a product trsrussi. O There are 32 tracks to record the DLIR, a virtual mixer in real time, and the possibility to edit (just) the internal sounds.

Easy to use, lots of buttons in front faade to strum his own way - like a magntophone, plus an alpha-dial, two Controller, and a standard LCD screen trs agr able. The bad thing: pass 50,000 registered notes, the processor is slow. The ergonomics are excellent.

The sounds are pure GM Yamaha - practices to be truly effective default. Let's say, a certain standard of quality required, those of the QY 700 dcevront some purists - but everyone can not afford a Triton, s'pas! The effects section is surprising to efficiency.

A beautiful trs sequencer. Trs enjoyable to use and a formidable efficiency. This instrument does remarkably well thought out. In addition, unlike computers, the QY 700 takes up less space, less noise ... and does not crash ever.

Did you find this review helpful?yesno
»
Read the 11 user reviews on the Yamaha QY700 »

Yamaha QY700 manuals and other files