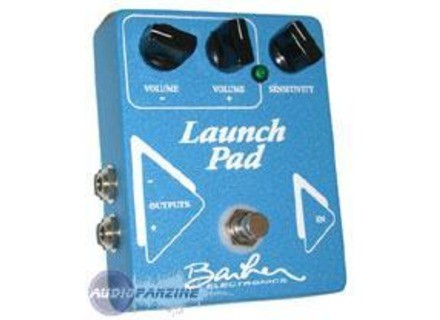 Barber Launch Pad
5
This is a pretty solid pedal in general, it's got a lot going on. It's primary function is a clean boost. But it also works as a DI box which works great for bass and guitar. And it's also an impedance adjuster for different instruments, if you have multiple instruments with different impedences you can adjust them here. But mainly I use it as a boost. It's an analog pedal which is nice. It doesn't fatten the sound up the way other analog pedals do though. It cannot be edited through any kind of editor utility program and it is not rackable, it belongs at the end of a pedal chain (or at least near the end of it).

Using this pedal is different from others but it eventually makes it pretty easy. There are two outputs and one of them has a - sign and the other has a + sign. The + sign would be used for boost , the - for impedance adjustment. There are three knobs, -, +, and sensitivity. The - and + controls are pretty self-explanatory, boost and cut more or less. The sensitivity knob allows you to change the degree to which each knob controls the level. Basically it's more complex than most boosts and can really be used to fine tune different volume settings.

I use this mostly with my live rig, which includes a Fender Strat with a Fender Twin Reverb. I like to use this after my other effects. My Big Muff is one of my favorite pedals but my primary complaint with it is that it robs me of volume. I like this boost because it's very clean and doesn't distort the signal anymore, and that's the only thing I can do to the big muff to make it louder as well as clearer. In fact, it sort of makes my guitar shimmer more somehow. With this pedal, all of my pedals become much more useful. The downside is that it also amplifies noise, but it's easy to eliminate the noise since you have such a boost now.

I like the cleanness of this boost the best. While I've tried other boost pedals and enjoyed them for various reasons, I often find that they aren't actually clean. They fatten up the tone a little bit too much. While that has it's place, I think a purely clean boost is really a nice thing to have in a pedal. It helps my tone a lot more when I need it to be louder, and can really make soloing less painful and can give me more room to really wail. It's a pretty good price too, considering it has an impedance adjuster and DI feature as well. Overall this is a great value.
Did you find this review helpful?yesno
»