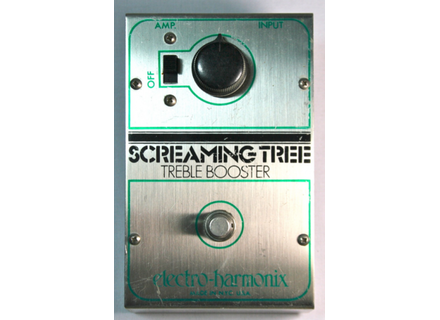 Electro-Harmonix Screaming Tree
4
The Electro-Harmonix Screaming Tree is a simple treble booster pedal that I have experience using with electric guitar. I wouldn't recommend using it for other instruments, but I haven't tried it so I can't really speak first hand about it. I believe that there a number of different Screaming Trees out there, but the one I've used is the original. The pedal has standard 1/4" connections for input and output and isn't rack mountable.

Using the Electro-Harmonix Screaming Tree is about as simple as using any other pedal out there. There is just one parameter that controls the level of boosting desired, and that's it. It does also have a switch for on/off in addition the pedal to stomp on that does the same thing. There really isn't anything else to know about the pedal, so a manual isn't necessary unless you had some sort of a technical issue.

Aside from being quite noisy, the Electro-Harmonix Screaming Tree does a great job in terms of giving your signal that extra boost. I've tried the pedal with a Fender Jazzmaster a '76 Fender Twin Reverb for a recording session, but we ended up not using it because of the noise factor. However, I was impressed with it's tone quality and have come to the conclusion that it would be best suited for a live rig where noise might not be as big of an issue like it would be in the studio. I guess it's just the nature of older pedals to be noisy, but perhaps it was the whole rig we were using. Since I liked the sound a good deal, in the future I hope to be able to try it out within a different context to see what the results would be.

I don't think that getting your hands on the Electro-Harmonix Screaming Tree would be an easy thing to do, as I haven't seen many of these around in studios or in people's live rigs. However, I would recommend at least doing some research on it if you're in the market for an older treble booster pedal. While there is definitely a lot of character to the Screaming Tree, I'm not convinced that it is the best pedal to be used in the studio because of the noise...
Did you find this review helpful?yesno
»

Electro-Harmonix Screaming Tree
5
This is a pretty solid treble-booster, made by one of the premier pedal manufacturers in the USA. This is an old-school, analog pedal. This pedal is not rackable, nor is it capable of being edited with a Mac or PC. There are no MIDI connections either. There is simply a 1/4" input and ouput. The unit is powered with a power supply that comes with it, and also runs on 9V batteries.

This pedal couldn't be much easier to edit. There is simply one knob for boost and a footswitch to turn it on or off. There is absolutely no need for a manual with this pedal, it's too simple to even consider needing one.

This is a pretty amazing piece of gear right here. I have used this pedal with both my Telecaster and my Les Paul. Both of those guitars are great, especially with distortion, but the only problem that I've occasionally found is that the high ends of my tone, especially when distorted, tend to get lost in the shuffle. This pedal is great in that it restores that high end, which makes it really nice for solos. This is great, because trying to get the nice high end for leads is difficult to do with just a pedal, as the feedback almost inevitably becomes an issue. The only issue I've ever had is that when I've tried to really boost the pedal too far I get really grating, piercing feedback. This kind of feedback is destructive to both amplifiers and eardrums, and there's no Sonic Youth-esque practical application of that type of feedback.
Beyond the feedback, though, I've found that getting a great rocking rhythm sound is now all I need, because I simply need to kick in the compression and this boost pedal, and I've got all I need for a great lead tone (perhaps I might need some volume but I can handle that).

I was really happy with this pedal, it didn't disappoint me in any way at all. I was expecting something to kick my lead tones up a notch for my less-bright guitars, and this pedal certainly did the trick. It's not that expensive for a pedal of its quality, and it's built to last, so I'd highly recommend it to just about anybody. I've played treble boosters before and none of them were as specific and satisfying as this one.
Did you find this review helpful?yesno
»