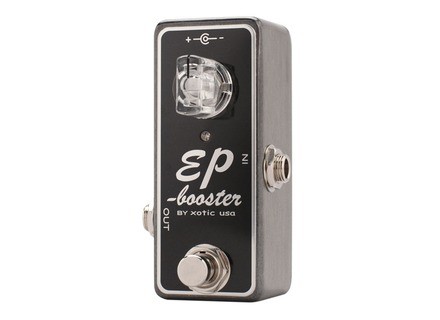 Incredibly easy to use.

It rocks as soon as you plug in: It boosts sound while adding definition in the high and low end. With my Tele AVRI 52 and the neck pickup or in the middle position, the ep booster really shapes sound and highlights everything I like, be it with the clean or the crunch channel of my Tubemseister.

I bought it to raise the volume during solos but, in the end, it's always active.
Given the sound quality, it's an excellent value for money, I would buy it again without hesitation.
Did you find this review helpful?yesno
»

Xotic Effects EP Booster
4
Xotic's Ep booster is the brands effort to recreate the sound of the preamp in the old echoplex units, hence the "EP". Lots of old school guitarists would use this to get the warm recorded tones you heard on their records. The Ep Booster is a FET design capable of up to 20db of gain. The pedal has a pair of internal switches that toggle either unity gain or a bright switch function. The pedals's size is mind-boggling small for the sounds attainable. The aesthetics of the pedal are really sleek, I love the look of the black on silver with the blue led.

The Ep booster can be used both in front of an amp or in the loop to give the preamp section an extra kick. The compact size of the pedal it welcome, as it frees up real estate on my board for other, larger units. The controls consist of a very simple one knob layout for controlling the amount of gain added, however, the internal switches give you enough tone shaping tools to make the pedal worthwhile. Construction is as rugged as any other Xotic offering and I've never had the pedal die on me in a live setting. The EP booster runs on 9v power.

In front of the amp, the pedal adds great sparkle and warmth to just about any existing sound you can compose. The bright switch matched the pedal fairly to my Dark, Mahogany Gibson. I was able to get some great breakup on the clean side of the Ace as well as a brilliance in the lead sounds of the tight gain mode. Placing the Ep booster in the loop really awakens the power section and makes the amp sound aggressive and percussive in ways i cannot get without it.

The Ep booster is a great pedal for achieving warmth and clarity in a mix. It is inexpensive, compact, and the simplicity of it's design echoes the no-nonsense attitude of the era the pedal is after. Give it a shot and you won't be disappointed.

First of all, there's two dip switches inside the box, both "on" when you receive it :

The truth is, in my case I just can't use it as a boost. There is no unity gain, the volume increase is way too huge, even with the knob at a minimum. That explains the 4, because I bought it for that exact purpose, get a slight boost for solos, and I absolutely can't use it that way.

I came to find out that it works well as a boost BEFORE the distortion/overdrive. In that case, the volume increase is less obvious, and gives more density and gain to your sound. Unfortunately I use only the clean channel on my 1-channel amp, so I can't use it that way either. Note that on a clean channel, the volume increases much more, can't tell you why.

So, in the end, I placed it after all my effects, just before the amp. I use it as an always-on effect. Its only purpose : get unity output between different guitars. You simply turn the knob up for a guitar with less output.

I just said it above, always on in my chain effect. It's one knob anyway so it couldn't be easier.

Speaking of the manual, it is simple and clear.

Oh my god. Once you put the Ep Booster on, you never want to put it off.

When you put it after all your effects, the Ep Booster has an overall effect on your sound that is incredible. It's lush and shimmering, very natural and non-invasive, it's still your tone.

Xotic made a huge mistake, in my humble opinion, calling this a boost. It's a great effect, but with the wrong name. They should have called it "enhancer - master volume" or something like that.

If you want a slight kick of whatever to cut through the mix, don't buy this. You'd not be happy with it.

But if you have several guitars and don't want to mess with your amp settings, this is the best thing you can get. Put it on forever and adjust the knob according to your guitars outputs. Plus it will enhance your overall sound, in the simpliest and best way possible.

Xotic Effects EP Booster
5
This is an interesting volume boost pedal made by Xotic effects. It's not necessarily a clean boost perse as it is not simply a transparent clean boost like the RC. Rather it's based off the preamp of the famous echoplex. As a bunch of famous players have plugged into the echoplex as part of the guitar chain to acquiring that awesome 'tone'.

Specs: FET spec volume booster that provides up to 20db of volume boost with 2 dip switches on the providing a treble boost, neutral or a bass boost.

Pretty darn easy. Nothing but one knob if you don't count the two dip switches on the inside.

This is a great piece of gear that sounds great! Most players I know that use it always have it on. Just like the original echoplex! It seems to add something to the signal that makes the guitar sound just overall sweeter.

The added EQ dip switches are great to compensate for any guitars or coil taps/splits that sound like they're lacking bass or maybe don't have enough presence. Of course the only problem with this is it's not tweakable in a live situation since it's on the inside and they're tiny dip switches. You'd have to preconfigure what you're doing to get this to work for you.

It's also a good boost just to compensate for the whole chain of effects that one might have and the long cable runs. I know a few players who use it this way as a buffer to bring back the guitar signal, it's especially helpful to have the treble boost dip switch for this situation.

What I like most about this pedal, I gotta admit, is not the sound, but the SIZE. It's TINY! I wish ALL pedals were made this size! Then nobody would have any problems with boards and pedals and trying to fit such ridiculously oversized pedals on ridiculously undersized boards!!

The sound is of course great. I can't say for sure if the tone circuit is exactly that of the older echoplex, I haven't played on in a very very long time. But what comes out of this pedal is very unique and very charismatic. With the added EQ features of the dip switches to help further shape the EQ is also an added bonus. I can see why EP users have this thing on ALL the time. It just sounds great, ALWAYS, and with everything!

Did you find this review helpful?yesno
»
Read the 17 user reviews on the Xotic Effects EP Booster »