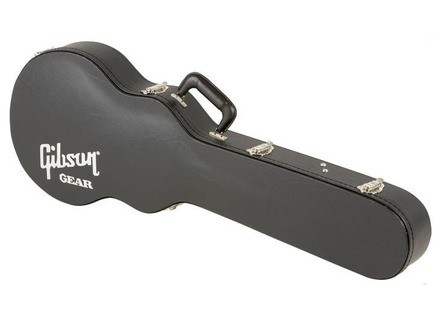 All user reviews for the Gibson Les Paul Case

Average Score:3.8( 3.8/5 based on 10 reviews )
Value For Money : Poor
Not satisfied with those reviews?
Our members also liked:

Gibson Les Paul Case
5
Comes with Les Paul, this case provides the security necessary for the proper conservation of our dear LP. Canadian manufacturing is beautiful and perfect finish. I love the very vintage look, white interior classy, ​​quality locks and handle. A case worthy of the guitar it contains! A bit like the old Fender bags that had the charm and personality while providing security for the instrument transported.
Did you find this review helpful?yesno

bubufuzz's review (This content has been automatically translated from French)

Gibson Les Paul Case
4
For how long have you been using it?
I've had it about a year after buying a LP Junior 91.
Have you tried many other models before acqurir?
I have also a Mustang 72 with its original tui. The Fender tuis are much better bill than the Gibson, and take the best shot to use.
What is the specific feature you like best, the least?
What I prefer is the sexy pink satin nightie comes delicately cover the guitar. This allows my little playmates having a good laugh every time I go out of its bestiolle tuit - No kidding, or have they had the idea of ​​shuffled these two colors? Pink and brown ... it is an example of good taste Rican a. ..
The least ... logo screen processing dor ... it is neither pretty nor discreet ... compared with the Fender logo in relief of tui the same name, it's less "class".
How do you report qualitprix?
The coating is debonding, is Dchira, the grip is dsintrgre, the wig is debonding etc. But all is good and is generally solid, especially Protects well guitar, and this is requested. But however they are too expensive in relation to the quality of finish. An Epiphone is just as solid and Toto will do, all for a lower budget. Fender for the same budget is much more polished.
With exprience, you do again this election? ...
Yes because I wanted the guitar which ignores the interior. If I find a used one not too expensive and in better state than mine, I Achteras - Ideally I will like the tui in the interior with Billy Joe panthres ...
Did you find this review helpful?yesno

Hit !'s review (This content has been automatically translated from French)

Gibson Les Paul Case
5
Mouarf!
It's totally by chance that I m'aperois there a topic on the estimation of fly Gibson LP ...

Mine is right as in the photo, but with the logo "made in Canada" the place of the head.
Must have been 15 or 20 years, no particular concern with the possible exception noted dsagrment be a well-child of the fist ct: ending concerts, when you borrow wings tiled rsonnent that, given the weight of the thing and there bte box, made "scrontch, scrontch, scrontch" your every step, like 2am on joining your car.

But hey, 'do not push it ... After all, it's a tui, point, even if it's true that a surprising THE FIRST open the pink color of the coating indoor (certainly not got the best can be, but then frankly not stack), but what do we srieusement in a sheet? ...
Then I ask myself all my life What good is the lock-digit "seal" the whole (I have myself always, and in position 000, the red plastic home ...). I ask myself the question, because the guy who wants you mow your scratch is when even though + easy for him to mow the whole-even with a squeaky-fist than to steer only with the guitar under his arm, right?

Yes, I know, there's the superstitious maniacs who lodge their partoches or their mdiators ftiches but I do not see the intrt would have for example a zicos another group to go and pick up your scores ...

Well, go, you have to give a note, I will give 9 because frankly, the tui is doing its job of tui and to me, I think, saved my day on the scratching all fell heavily loading poorly cal. And the same day, same time and even my second with my Ovation tui Scheer, but that's another story ...
Did you find this review helpful?yesno

scorchesofdusk's review (This content has been automatically translated from French)

Gibson Les Paul Case
2
I have since purchasing my Gibson Lespaul, so five years pretty much.
Ben I do not like much, it's certainly a beautiful object, but the blow of the logo is a big publicity stunt, and frankly it is not resistant to a box. (Do not sit on it, you'll hear creaking!)
When buying just one flycase is frankly too expensive for what it is.
Did you find this review helpful?yesno

we therefore make a tui brown faux leather, also evokes a coffin that opens when ds and that one comes face to the fabric and the marmoset filthy pink.

set by the extravagance and Aesthetics pub "gibson - United States" reprable three km round history of well displayed and the first attempt indlicat come to you flying, the tui is pleased t tough, ensuring good protection and a firm hold of your love guitar (FYI, the tui is dj tomb to his full height (one thing not to do, namely to the tui vertical> trs not stable) with scratches in it, and, while cursing me in my ngligence, trembling all the ide of having to pick up the small cuillre lp, j ' t have reassured to find that she had not a pet '!)

however, the lock is actually crap, but I do not lock that limits the risks, even if it tends to hang. the coating in sky dcoller trend, or does plutt rsiste RPTS not the assaults of my cat that he really like to get the grip on it (not a sign Resistors of any evidence so). gilding tend fade over time.

CP in résumé design that protects your guitar much shocks, but finishes of shit a price close to outright fraud. certainly stronger than a tui thoto 50 euros, but the score is 4 x more expensive and nothing, least of all finishes, do not justify such a cart! Unless you pay the big logo gibson described above (it also seems to me that the same tui registered with "epiphone" rating above half the price ... weird, right?? ?)

short, fortunately for their gibson guitars are better designs than their tuis. sparemment not buy the book with scratch anyway, because it is trs ais to find a quality equivalent to two to three times cheaper!
Did you find this review helpful?yesno

Don_Viviano's review (This content has been automatically translated from French)

Gibson Les Paul Case
4
Moumoutte rose a vile taste, but it's too cool.
The flycase is strong and it shows, although rigid, the guitar does not move. As against the wig comes off a bit.
The lock code was broken immediately in the closed position, so I gave him mouth fucked with a screwdriver (mouahaha!).
Anyway what this system is shit and it's no use.

But good, solid and kitsch, mythical, I would not trade against better not!
Did you find this review helpful?yesno

Mr Flo's review (This content has been automatically translated from French)

Gibson Les Paul Case
5
-I do not use it for a long time but I find it very good.
-Most: The guitar has the inside does not move at all (for the Les Paul, SG I do not know), it protects really well and a nice handful.
-The -: At the moment I see it.
-The quality / price ratio: Generally sold with the guitar so ...
-I recommend it to anyone who wants a good case but I think that should be used to find it because I know if Gibson is selling it without the guitars.
Did you find this review helpful?yesno

gozguitar's review (This content has been automatically translated from French)

I have no guitar, only the flight and frankly, it contributes to the myth Gibson.
It is true that compared to my PRS is of lower quality but it holds the road anyway. The pink wig, we all agree that it is not very beautiful but then again ... Gibson myth.

Gibson Les Paul Case
5
It is faux black snake, plush interior black / very dark gray logo ... "Gibson United States," but the case is made in Canada (after a p'tit sticker with the red maple leaf ) ... it was in 2005 sold my LP Std ... use, no fault ... identical characteristics, exept the color, the previous model.
-My code to close it's like all my Gibson, and it is beautiful .... n to dream!
Did you find this review helpful?yesno

Gibson Les Paul Case
1
I bought this holster at the same time that my LP in 1995. (It comes with.) It is brown, with five closures with a code. It bears the inscription, and Gibson made in United States, which would happen aisment. The indoor is a pink teddy got ignoble. This is the indoor guitar that the Hummer and the Multipla is the automobile. Ds The beginning, I had trouble. The teddy has begun to dcoller after one week. Back to the store. Then, a year APRS gilding closures silent part, leaving a gold dlave. When one is not able to do the dor-long, it makes money is available for fittings guitars. Finally, the lock code has been blocked, I can see the store. The seller told me it frquent. Imagine going to attack a concert. The lock is blocked, music stores are closed, you do not have another guitar or is canceled, or we attack the tui mass. Suddenly, I no longer closes the lock. DEFINITIONS In this tui is unworthy of Gibson, especially if one takes into account the fact that PRS is charged 200 euros! If one day I lche, I will look elsewhere for half the price I have a tui more beautiful, more solid.