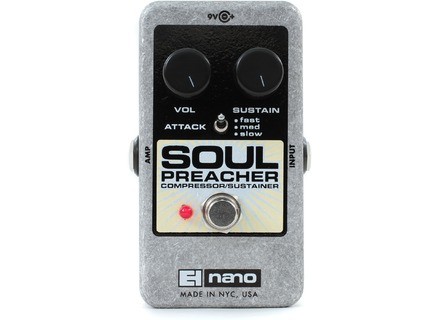 All user reviews for the Electro-Harmonix Soul Preacher Nano

Electro-Harmonix Soul Preacher Nano
5
This is a compressor/sustainer by Electro-Harmonix. It's a simple pedal for guitars, so it's not rackable or MIDI-ready. It cannot be edited through a computer at all. It's completely analog and has the 1/4" input and output.

The editing of this effect couldn't be more basic. The device has two switches on it, one for Volume and one for Sustain. The good thing about it is that it has three different levels of attack (Fast, Medium, and Slow) that are controlled by a three-way switch underneath the knobs. The manual will explain all of these things in terms that make sense, but again, you'll need to experiment a little to know exactly what you are doing with it.

I used this particular compressor with my Strat in a Fender Twin amp. It's not a bad compressor for highly rhythmic, funky riffs, as it doesn't lose the biting sound that a clean funky electric will have. It prevents the ringing sibilants that can ruin a good scratchy rhythm. It's also not bad for ringing, open chords, as it will keep them sustained without robbing them of their glorious tone. I can't tell you how many compressors I've tried that have completely destroyed my clean tones. Now I get a healthy mix of sustain and tone when I'm strumming hard or letting chords ring. Unfortunately, this pedal is not perfect, as with heavier, distorted tones it's really almost useless. It doesn't give the kind of sustain that will really keep your leads soaring, and it's really noisy with distortion.

The only way to get the most out of this amp, in my perspective, is by using it in combination with another compressor. Preferably, the other compressor would have qualities that are completely different than this one, i.e. would sound great with distortion and not so much with clean tones. I'd have to say that for the price ($100), this is worth it if your guitar doesn't have a great natural sustain. Be forewarned though, that if you are used to playing clean tones straight through with no compression, this might not be for you.

Cirrus Uncinus's review (This content has been automatically translated from French)

Electro-Harmonix Soul Preacher Nano
5
Casing mtal very solid format MXR, supply 9VDC format "standard" and possibility of battery, switch very tough cbl in true-bypass, which is unfortunately an old plop activation, 1 input & 1 output. One volume knob, a knob that RULES the importance of compression, a slecteur three positions to choose how quickly the compression will attack.
indoor, the components are surface mounted, as on all new Electro-Harmonix also ...

First, I think it is trs transparent, except the effect of compression itself Obviously that gives some color to the sound. It affects trs little harmonic content of my sound (unlike a Dynacomp for example, "color" not bad), particulirement compression levels in the less extreme. For cons, the compression is not as natural as it could be I think, made ​​trs "veil" is not as lively as other compressors. Although when you push the compression started fairly be organic (who said ironically?), And how slow it was plutt sound natural.

This slecteur speed is critical, slow-mode compression does not attack right away and so do food too the sound of your contact with the strings, unlike the fast mode o compression you include compltement but without getting the famous squash (if that&#39;s what you want, better look elsewhere, including the aforementioned Dynacomp ct and its many drives). The mode is medium in between, let&#39;s say.

Anyway, overall, the compression threshold is placed low enough, almost nothing screed. And the rate can reach heights you can really EXAGRES is gnial (the EXAGRES, was part of what my flat in Electro-Harmonix). At most, a sound like love, and the sustain is standard.

To return to fast, it&#39;s really special, use small doses. The sound is not saturated in the sense of an overdrive, I mean that his "trembling" of Manir CHARACTERISTICS (you can often have a glimpse of the rendering costs of other compressors but it&#39;s really the brand and of the Submitted dpart, while in a gnral happens when you push its maximum compression). Finally, it is the most prominent of this mode.

This is for the lack of headroom in the factory rglage: Occasionally, you will attend a same effect disgrcieux clipping (even on a team of guitar pickups Single coil normal). This flaw is admitted in the manual, which says it is to design the circuit. In fact, if I read between the lines, the threshold is reached in part because of the gain (input gain) is boost. What they do not tell (and ridiculous) is that there is a trim pot to the indoor RULES precisely the input gain. So it increases the headroom, of preventing the pedals to saturate, and even helping to reduce the compression and background noise as a back up just the threshold. For cons, I admit I have not tried to touch me even (I like the rglage factory, which is quite barge).

Personally, I do not use it both as a compressor and as clean boost colossal: there are forty Dcibel boost, if you put the zero-compression! It&#39;s really standard, I think I&#39;ve ever heard of a clean boost that was the same. Good, honest, and even I do not use anymore, but I think the same when maintain, except in urgent need of funds. In fact c&#39;tait a shot GAS; I dj the White Finger, which is gnial, and I think never replace. Note that if both volume under the hood, it&#39;s for the compression ratio rcuprer standard: when the compression is maximum, we must put the volume to 3 / 4 to get the &#39;unity gain (knowing there is 46 dB), it will say jusqu&#39;o the pedals!

A compressor forcment not subtle, and probably a little part (especially since most compressors are clones of Ross, I believe).

I reproached him: compression is not great "natural", "smooth" (ah is, when we got the optical compression ... that said, I have on YouTube cost of compressors of solid-state drive that Ross actually sounded like I like). In addition, he is not famous squash, I think ... l is a matter of tastes.
Default goals: plop activation, no compression trs nuance and lack of clean headroom that mne sometimes clipping (but normally you Solve the problem in less than two thanks to the trim pot).
Quality: The clean boost that goes beyond the pedals ad hoc extrmisme the compression, and incredible sustain that goes with it, the effect of "shaky" in fast mode, rather CHARACTERISTICS (but in some GNER, which can still try their luck with the trim).

Small sample: <span style="font-family: 'Lucida Grande'; font-size: 11px; white-space: pre; -webkit-border-horizontal-spacing: 2px; -webkit-border-vertical-spacing: 2px;">http://www.megaupload.com/?d=NXNTXE6Y</span>
(Chanage: Telecaster cheap cable Cordial buffer Big Muff Soul Preacher cable crappy computer. J&#39;enclenche the Big Muff the very end for a more complex harmonic structure is a good test of transparency since the Soul Preacher is downstream.)
Roughly the PART ONE is with compression to the minimum, I switches from slow to fast mode through the speed intermdiaire and ditto with maximum compression. I admit that the rendering seems a bit more natural in the sound card in my amp transistors.
Remember that the trim is rglage original, huh.

PS: I put a lot of pictures to compensate Previous notice, which I find a little "lightweight". Usually, I prefer not to put pictures at all, but ...

vinie31's review (This content has been automatically translated from French)

Electro-Harmonix Soul Preacher Nano
1
I said that I used this with my Jazzbass deluxe active.
Compressor for bass guitar or any analog. Not editable.
Volume sustain and 3 levels of attack. Good metal casing.

Setup could not be more simple. Difficult access to the battery as all the electro harmonix effects.

I said that I used this with my Jazzbass deluxe active with my bass and therefore this is useless and tends to distort the sound. I bought this online and I returned after several days of testing ...

I used it a week and I did a concert.
Purchased by mail I could not get to try before purchase.
Inevitably I find it expensive for what it brings but again this test was done with my active Jazzbass.
I recommend not trying to bassists.