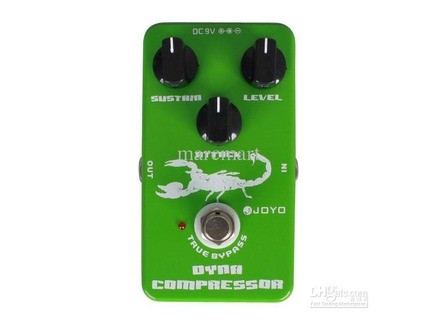 JF-10 Dynamic Compressor, Compressor/Sustainer for Guitar from Joyo in the 10 series.

WiR's review (This content has been automatically translated from French)

Pedal compression based on the type of compression developed by Ross (Dynamic Compressor).

On that side, RAS, tutto bene, it may not be very robust, but that only time will tell. Otherwise, the painting is beautiful etc ... Good product of this point of view.

So I&#39;ll try to clarify a little thing, but I write as if the reader already knows how to work and what its effect on compressor.

SUSTAIN: Controls the time the sound takes to be compressed. I think I understand that it is the "Release".

LEVEL: Acts as a volume knob, so you can boost or lower the volume on the contrary (as giving more SUSTAIN sometimes the volume increases so it can be used to compensate).

Well, other than that it is pretty standard, easy to use.

The knobs are a bit fragile, do not turn them like a nag.

And be careful not fun to be rotated 360 ° because sometimes it is possible! (And yes! Needless possible but some pedals, faulty fabric &#39;I do not know ...).

In short, do not leave within reach of - 36 months see anything.

So at first I was convinced bofement. Quickly tested, yeah blah, compress it, nothing more. I had already tried the Dan Comp at JAM (here http://www.jampedals.com/dancomp/), a pedal inspired by the Orange Squeezer, in short, the ultimate compressor pedal format 1 knob.

But after one week or two or even three to make my life without touching the beast, I decided to go back and explore more in depth (ambiguous sentence according to which we quote ...).

And I found myself it could really help. I intended to sell it, but given its usefulness I think keep it for my records.

If you&#39;re too lazy to read, I did a test video of the beast here: I strongly advice you, if you plan to watch video, you run any of the following description of the video located below it or I sketched the plane of the video. So you will not look as / part (s) that interest you and will avoid all the crap.

Already it is not very noisy, in clean, at least it never blows, blows it into overdrive when the volume increases (and therefore increases the breath of your initial overdrive, so it does not really add breath) .


Then it is possible to have an effect of extreme compression as very subtle, I prefer rather marked settings while remaining subtle to let the dynamic expression. With this pedal is possible.

And this pedal is perfect for me:

- Give more body to my agreements, so that each notes in the chord are at the same level as each other and thus notes hear as well as each other. My agreements are thus magnified and need to scratch harder on the high strings and moderate his attack on the bass strings. Settings for that (time): SUSTAIN: 15h. ATTACK: 13h. LEVEL: 12H.

- After just by reducing the attack between 9am and 11am I get a good sound for slaps my face guitar. And unplayed notes are identified and understood, perfect for funk rhythm side of slap (funk, that&#39;s what you do not play is the most important).

- Since a compressor raises the weak notes and lowers excessive notes, I find it useful for a wah live use. According wah wah, lower notes sometimes found as well in the mix with the notes ultra sharp. With this compressor after the wah wah, everything is equalized and every nuance is well respected.
Setting: identical to the FUNK but with the ATTACK at 9am.

- It can also be used to boost through its volume. In thus lowering the SUSTAIN to 12h or 13h, the ATTACK LEVEL bottom and around 15h or background. A useful boost we get to spend rhythmic solo without loss of volume and facilitating a little play in legato (but no it is not cheating ...).

- It can therefore also be used as Mark Knofler used to do, to bring out the mix solos clean (clear sound). It works great for that, my settings for this purpose are: SUSTAIN: 17H, ATTACK: 9H (see 8 7H or if you have tired fingers) and LEVEL 12H and 14H by envy.

- And finally, with the same setting I come to the main use that I would spend it. It allows me to limit the attack of agreements clean. What at first seemed a heresy (I play a lot on the dynamics right hand, I am right handed, yet thine ambiguous sentence ...). So I&#39;m scratching super strong, the dynamics remain almost the same, but if I scrape very gently, the dynamic changes. So when I start snapping very very own ideal rhythmic Pop, my sound is unified, trimmed, to save. Making it an essential tool that I had neglected so far in my recordings!


In short, he does his job eventually, it is rather transparent, not bulkier than the other, but definitely very useful if you know what is expected of them and if you know how to use a minimum (I m &#39;&#39;m leaning on not more than 1 hour or 2 so for about 15 minutes, that should do ^ ^).

I utlise for less than a month.

To conclude, this is a very good box for the price. This is not a tube compressor or compressor studio so it does not bring more warmth to your sound, more roundness, it will do just what is asked, without altering the original color of your sound.

Thus, this makes it a formidable tool for recording and for live. So I do not see how I could save my pop rhythmic far without him.

I wonder if I will not take live with me, but unfortunately I have no place on my pedalboard, but it is much more useful than I thought, the guy!


In short, as usual &#39;, to try before you buy if possible anyway, although if you know what is compressor, this pedal exceeds not function without coloration.

So I, for one, I say a big Yes, but do not abuse it (not very robust in my opinion).

Good music to you all!

22 of 25 people found this review helpful