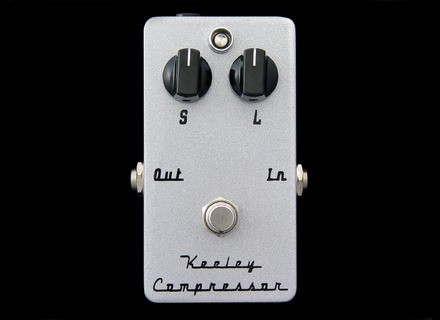 Keeley Electronics Compressor
5
A lot of people don't know how to use compressors or when to exactly use them. Considering today's high gain amps, it's really no surprise. Most people don't really need them. However, if you're a country or funk guy, I'm pretty sure you know exactly when to use them. That's on your clean and low to mid gain tones. To me, the perfect compressor is very transparent sounding and not overly "characteristic." The Keeley does that tone great, and it's one of my favorite compressors out there. This has two knobs to dial in the compression that you're looking for.

The pedal is housed in one of the best housings you can buy. There's no way this pedal is going to be breaking any time soon. It's a solid housing that'll withstand even the fattest monster you can find smashing all his weight on this thing without any issues at all. The pedal is true bypass, so you never have to worry about this thing sucking tone. However, you do have to worry about long runs of true bypass pedals; you'll want some sort of buffer if you have a bunch. It's super simple to set up, and you don't need a manual for this pedal. I mean, there are two knobs. Just turn them until it sounds good.

I really like to use compressors on the clean tone the most. It can take away from that annoying peakyness and help make them a bit more consistent. It also adds something to the tone to help make it stand out a bit more, in my opinion. A few guys like to run this in front of a high gain amp to give that super saturated sound, and while it works, I only enjoy using them that way for lead tones as it tends to get noisy and a bit too much. If you ever wondered how country players get their insane clean picking licks from, this is the secret. Put this in front of a clean amp and pick away.

This is a great pedal. It can be a bit pricy, but it's worth it. I still recommend buying used. In my opinion, the best model is the four knob compressor as you have all four knobs right there at your finger tips without any hassle. It's more versatile and gives you more sounds, but some prefer this 2 knob version. Try both if you can, but if you can only get one, I'd recommend the four knob.

Keeley Electronics Compressor
5
This is a compressor for guitar made by Keeley. It's a very basic pedal but it's tone is so good that it's become a highly sought after unit. It's a completely analog pedal with no digital elements, and because of that the pedal cannot be edited on a computer, and also can't be MIDI controlled. It's got 1/4" input and output as well as a 9V power supply (could also run on a battery, 9V).

This is a really basic pedal to use. There are two knobs which are marked S and L. These letters stand for Sustain and Level, and basically mean Compression and Output for those of you who are used to different terms. While some might be put off by a compressor that is so limited (pardon the pun), there isn't really much more need for more knobs with a compressor like this. The ratios and settings are set perfectly with this and there's a lot of variety to be had in terms of sound.

This is one of the best compressors I've ever used on guitar. It's great because it provides the guitar with incredible sustain. If you've got a great tone but you can't keep your dynamics up, this is one of the best ways to fix that problem. It's got a nice creamy sustain that is ultra smooth and doesn't really weaken the sound of your playing as much as smooth it out and kick it up a notch or two. I really like it for that reason. I'd certainly recommend it more to people who play a lighter style of music, like country, blues, or light folk-rock as opposed to a punk or metal band. It's too smooth for those types and doesn't provide much crunch.

A lot of country players will use this, and it's gotten rave reviews across the board. It's a great mild compressor, it's super transparent and has a great sound. It's about 200 dollars so it's a little pricey but if you are playing this kind of music that stuff is crucial. There's really not many other compressors that are so nice and transparent. I've played quite a few compressors as well as used studio compression, and I'd say that the only one that came close to being as transparent as those was this one. Overall I'd have to highly recommend it.
Did you find this review helpful?yesno
»

Can it really get any simpler than a two knob pedal? Well, that's what you're getting with this Keeley Compressor. There is also a four knob version, but from what I've been told this one is all you'll need, although I've yet to use the four knob version myself. This one has knobs for just sustain and output level, which is about as basic as you'll find a pedal. A manual shouldn't be necessary since it's so simple.

Hands down the Keeley Compressor is the best compressor that I've used for electric guitar. It really can make your guitar sing, as the sustain is perfect on this bad boy. I've used it within a few different set ups and with a few different players and it always seems to get the job done with it's milky smooth sound. I don't own this pedal, but if I were to upgrade to one pedal in my rig it would definitely be this one! It's hard to say exactly what sets it apart from the rest, but one listen to it and you'll know exactly what I'm talking about...

If you want the best guitar pedal compressor that you can buy, look no further than the Robert Keeley Electronics 2 Knob Compressor. It's simply that good. The price isn't going to be cheap, but when you consider that you're only spending a bit more than you would for another compression pedal, it seems like it would be worth it in the long run if you're able to do it. I don't own one of these yet, but I'm definitely hoping to get one soon!
Did you find this review helpful?yesno
»

LimiterOff's review (This content has been automatically translated from French)

A big blue LED, which is the hallmark of keeley, the LED is powerful trs, trs good when we see the effect is enclenchbr />
In there are the indoor rglages 2 of 4 knobs compressor, check the reviews on the 4 knobs, the guy says well.

I use it on guitar, elec, acoustic guitar and voice.
On elec guitar with tube amp is really gnial, terrible!
The sound is magnificent. Let's say often when playing in elec clear, there is the problem of dynamics (loud surprises when you hit hard, and not strong enough when playing quietly) and the compressor RULES ca. It really brings me the sth more.

On acoustic guitar is DIFFERENT, but the guitar really stands still when playing in groups.

Of voice, I would have to test more but it works well, for against, for reasons of rglage of impdance, is through a passive DI in reverse to type compression. At least that's better.

I've had six months.
I really chose the right comp mticuleusement because I wanted one that is effective across the sound spectrum. In fact I use an Electro Harmonix HOG and I wanted to be effective over the comp.
Frankly I do not regret one second.

Did you find this review helpful?yesno
»
Read the 7 user reviews on the Keeley Electronics Compressor »

Other Keeley Electronics compressors/Sustainers for Guitar