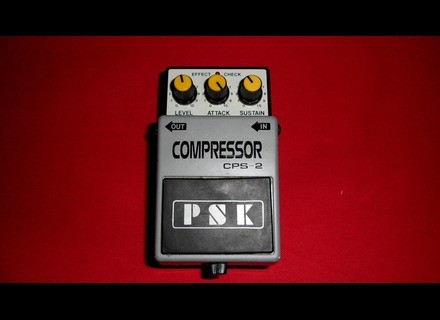 n.olivier's review (This content has been automatically translated from French)" Practical, useful and effective"

His side: he does his job. I do not understand what the purpose of a compressor, I get it!
The level is the level of output, which adds a bit of drive when pushed, which can be handy. Knob the attack, also acts on the level of output but not saturate and can be enhanced when an attack is very limited and not attack when you attack harder, just to get an equal level between all attacks, and therefore without pushing hard, we can have a powerful attack while not exploding strings, it sounds good with the attack pushed.
Finally, sustain lengthens the life of the note, in super clean or saturated.

Good pedal, very practical, can be chained before a distortion, and even after, I particularly like, but also in the effects loop, that's fine too.

I used it on transistor amp clean, crunch on simus and amp lamp, it is each time with a loss nonetheless clear lights, it colors a lot anyway.
I do not think it is true bypass.

I use short and long.
Being unfamiliar with the comp, I can not judge its quality in any case, it does its job and I appreciate for that!
So the note expresses my feelings, it's okay but I do not know if this is judged better or worse.