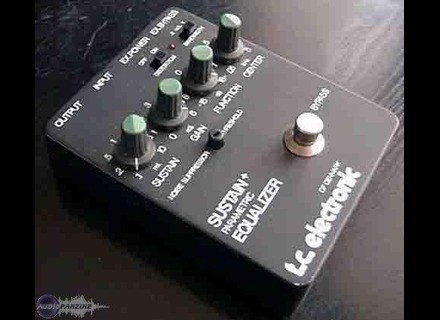 This pedal is really easy to use, but it takes a while to understand exactly what is happening to your sound from the compressor circuit. That circuit is very subtle - most compressors for guitar squish the heck out of the signal, so it's very obvious when its on, but this pedal is different. The controls are very interactive, so each small tweak of a knob can have a different effect on the sound.

The parametric equalizer circuit, however, is much easier to figure out. Pick a frequency, then boost or cut. Simple. I like to use it as Eric Johnson did - to cut out the pick attack from my guitar signal. It's radically effective for that.

This is a very nice unit. The compressor doesn't get tooooooo squished - dynamic range is mostly intact, yet the notes sustain out longer. It is a handy feature. The parametric is a tool any musician can use properly - if one was an acoustic guitarist that plugged into the PA, this unit could help isolate and destroy feedback frequencies without being detrimental to the overall tone of the signal.

I actually sold mine. And that's not because I disliked it - it's a rare unit, so it's hard to find. I just needed to raise cash for another box I liked. You know, the dreaded Gear Acquisition Syndrome? One day, when I have a spare couple hundred laying around, I'll try and buy another one. The TC Electronic Sustain + Parametric EQ is a fantastic old pedal that really helps tailor the feel of your playing.
Did you find this review helpful?yesno
»

RandyRhoads's review (This content has been automatically translated from French)

Trs easy to use, it works with everything you nikel branch in, guitar, bass, synth vocals, Coffee Maker ...

The sound is just incredible! a compressor in a small studio boiboite, I thought that c'tait possible. The grain of the guitar is very good respect.

It is no longer manufactured, and is difficult to find, TC has released a repetition, which, IMHO (I compared sounds a thousand times worse, sound is less warm than the original and less rglages prcis. If you find one buy it! (those with a serial number beginning with 2 are the research) and if you dja, keep the!
Did you find this review helpful?yesno
»

Other TC Electronic compressors/Sustainers for Guitar