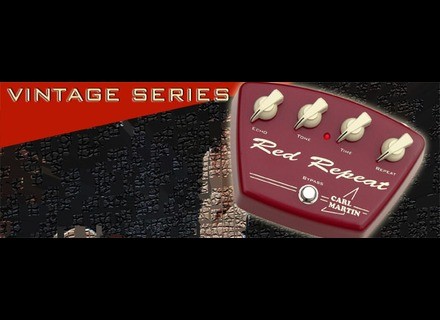 Carl Martin "Red Repeat"
5
Carl Martin Vintage Series Delay, 4 knobs: Echo for the level of the effect, color tone to give a more or less clear on repetition, Time to manage the delay time, and Reapet for the number of repetitions. Housing of good quality, soft switch knob ok very easy to initiate, In, Out, Alim 9V battery or.
Indeed digital analog simulation. reconnaissble especially in the color of repetition to deal with the "Tone". The delay stops at 600ms.

Easy and clear, with many vintage style knobs progressive.

The effect is present. The analog simulation makes pretty much echo and dirty if you lower the tone, in contrast with the background tone was echoed clearly the first time and then gradually deteriorates.
the delay time, 600m Sufis is to bcp styles. The repetition in turn is a time to infinity but still this notion of his deteriorated progressively.

For 100 Euro, price / quality ratio ok. Carl Martin a exellent reputation and it seems to me justified. No problems since qql months.

kaktus666's review (This content has been automatically translated from French)

As said Burebista knob the Echo does not sound 100% effective, but the dose rate effect without affecting the level of live coverage. At zero it was 100% of the direct sound to "3am" was 100% + 100% direct effect, further, we surmixe effect compared to live.
It is a history of gout. I like it like that.

Otherwise, the knobs are fairly reactive, but more importantly, the big plus compared to other effects of the same claim (typed echo tape), it self-oscillates perfectly <img class="smiley" src="/images/audiofanzine/interface/smileys/icon_lol.gif" alt="" />
When it leaves, the sub bass are not far away.

It sounds really good. It has its grain. From what I heard as the Delayla tests, they have the same grain divinely "dirty".

The knob Time is pleasantly soft. Repeat with infinity, when acting on Time, rehearsals are distended, no effect of levels as I have seen elsewhere. A bit like when a DJ's vinyl slows.

And then, the self-oscillation is really good. Winded as I could not see elsewhere.

I've had it 2 years now, and I really regret not having learned.
For now, she did not let go.

I had a Boss GX700 multi-effects before buying it, and it was the first in a long list of pedals to buy. I bought it based on its reputation and its price. Since I have a EHX # 1 Echo and more, but I get rid of a T-Rex Reptile (also terrible).