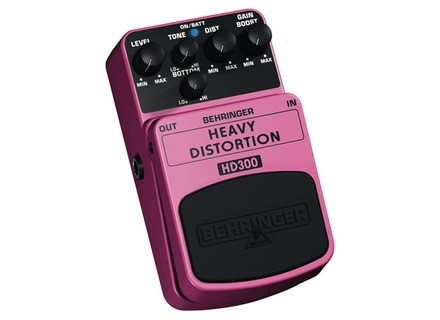 SlapKid's review (This content has been automatically translated from French)" Very good!"

Behringer Heavy Distortion HD300
5
I use it for a year, between guitar (rg7) and VOX AC15.
The bug is versatile in its settings, you can precisely dosed bass and treble.
The originality of the circuit is a boost in addition to the drive, and open warm tones accurate full sustain without having to turn up the gain to more than 10-11hrs.

Bypass buffer, transparent to use and silent On / off trigger. As I stand at a respectable distance from the vox (adonf) I 3m cable to the pedal and 6m pedal to the amp and the sound does not suffer bypassed, unlike true bypass pedals that puff sound in this case.

No noise nuisance, the circuit of this distortion is silent.
I powered from very complicated harley benton junior and zero worries.

Extremely simple, you just capture the interest of the proposed circuit. Of course if you put the gain to boost the bottom then it will not be top huh, must be determined.

The base character is a fine grain, limit slender, with beautiful high-mids. The dynamic is good, it's pretty tight as distortion nonetheless.
I use it for lead, rhythm (no mesa style, or rather lack of) and I have the gain at 10-11hrs plus boost to 9hrs. I do not see how one might want more gain without any punkifier me finally.

So for the solo at the vai that thinks carlos is the full card, a treat.
I have a paf PRO7 in Acute rg, and the original axis7 serious that I splits for clean sounds-blues.
The surprise is when I turn down the guitar volume (above magic capacitor) because unlike most distos the HD300 produces a delicious, so it is two things at once if you have time between solos and rhythmic crunch .

I tested on vox ac15clair the cleat, harley crunch distortion / shockwave jet city / boss ds1/bebert wd300 warp ds1 and apart from they are all very usable.
The side a little skinny mediums of the HD300 does not agree very well with the sweet vox, for it is the wd300.

On the other facilities HD300 is always good, and his sister the VT999 sounds very similar tube or not ... but without the option of boost.

I have a korg AX3G also, of course not the same but a little skinny one side also in the midrange. It's a gas plant to be used of course ...

I rachéterais the HD300 if necessary, clear!