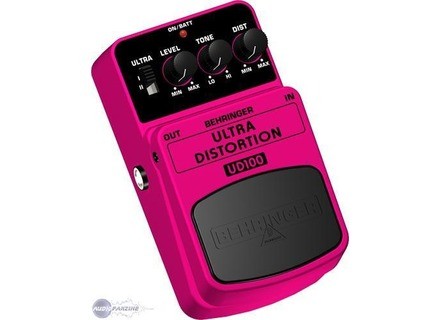 THeAnGelZ's review (This content has been automatically translated from French)

Behringer Ultra Distortion UD100
5
Bon ben Here is what ... It's already been said.

Note that a good finish, it makes a little toy qd even fluorescent pink plastic with a valve has a little knob that game are not super aware and have a little play
But it's going to what she is weight in his hand as he has said has commented before because of the below.

Ben is very good There's something to do, there's a lot of opportunity, TFW sometimes the sound is a little dirty but hey if not rule torp like a pig is ca.

Ben is the guitarist in my group who bought it, I test it on his guitar, pi then I test it on my bass, and I was surprised honnêtment the low result for anesthesia was my friends,
No it's really not bad, let's be realistic, and then a distortion pedal should not cost the price that others sell them ... I'm sorry I have to build two least € 30 each a little pressure then mass-produced ... What there's no picture, I hope because of this pedal marks will be a little slap and lower their prices, but the problem are the people who shit on the sub-brands such morons in bad language. .. ca TFW will change attitudes.

But if the result is really very decent for the price.
Did you find this review helpful?yesno
»

Behringer Ultra Distortion UD100
3
A case in plastok fluorescent pink! It's been very seriously imagine Kerry King bought a disto Rose ... M'enfin. ! ON MY JOKE NON stole my!
I would like to return to the quality of the Case ... soyont clear: This is the shit!
is the Fien as they say ... a calais I am frankly the valve phaser is a hard press and requires special attention ... it moves from right to left he walks. s it will push more than one side of the other if you press the right tro for example, it will be possible that the pedal does not light s! Becaufe the valve will be twisted and therefore will not come down over ...
I feel that in a month jsui good to buy a case as friends of our di previous opinion ..

and the access to the battery is a true callamité! Long live power supply!

Nothing extraordinary Po real challenge to find his own ... just ca Sounds cash! FO in. ÉNA having to learn to use it! (What I c even if they would be in. in. bothered!) Short ...

8 c becaufe use simple, like any pedal you tell me, but always note that the knobs do not rotate with the same force, you know they don not have the same sensitivity, the same hardness.

We are still far from a RAT! Connoisseurs me even say "we do not just compare"! and it's true!

It is ultimately a distortion that will amuse you a little time but to say that you can make your sound even qd is very cold and without personality. Quoted prices, but ca the fact you still have to admit that to end up with a pedal has ca 100 euro is not quite the same effect as a behringer ...

One senses immediately the massive knobs on the pedal the same answer .. its Ze The in our group we have for a month or two it already separates ... I do not think that one can speak of the Big or "hybrid that Marshall has nothing more!" It is still well below ... no heat lamp is pure transistor is hard, the Synthetika ... it shows that when we play with ...

As our friends said the second notice C THE PRICE!
it has also built large max 30 euro, it will be extended to 20, 25 euro for a handmade ...
Then people criticize the product easy von:

A / c is the price the poor quality ... : TRUE!
2 / The sound may be zero. It's not entirely true nor entirely false disont that troubleshoots ca ca be just nice. I myself following the same posessors Phaser I think this kind of EFET worth more that the coup one disto ...
It takes but it's still not great.
Did you find this review helpful?yesno
»

taeliesin's review (This content has been automatically translated from French)

It is a distortion ...
background noise for sure, even at low volume can be understood ca ...
a slight distortion, must take something else, parcequ'a 0, the knob of distortion is already too far .....^^
The Tone is pretty bad, it actually has two modes: acute or low, that's all
the volume is not too bad, but nothing more ...

I use it for six months, and it is still part of my pedal set ...
Why?
I made the noise ...
this explains it
I advise against it may be in the first purchase, ca risk disgusted with distos, it is most preferred that the amps in genral much better ...
and I want to clarify that it will be difficult to be part of your sound, you may prefer another quickly
I use a background with the distortion of the amp (Park) is back .... bin and it makes noise, and that's what I ask him ^ ^
While the price is unbeatable, but it's not a serious pedal ...
I advise to turn over to the DIY and patience that goes with it ....
Did you find this review helpful?yesno
»

scarabeo's review (This content has been automatically translated from French)

Behringer Ultra Distortion UD100
2
I will not rewrite what has been previously described ...

Very simple, but with a peculiarity: two modes of distortion Ultra 1 and Ultra 2 per switch.

So that's where it gets stuck ... This is the third Behringer pedal I bought (and sold), the only one I kept was the TO 100 really for once, I'll explain later why ...
The sound of the UD 100 is small ... and completely unrealistic in terms of distorted signal. I tested it through a Squier Stratocaster and a rise in Duncan Power Chorus and a vintage Marshall head with a Vox cabinet. As with a VD (that I left a post), the sound is shrill, does not respect the instrument in "eating" the lower frequencies ds ds spectrum and the medium. It was immediately surprised by this side "emulated" when it is the component. In any case, it sounds too clean, whatever the level of saturation and really "bad" to play (in my opinion).

For € 19, do not worry it's disposable. The case is assembled and plastoc seems solid (for the price of course). Its level, it is of € 19 too!
Thinking that I would do (after having tried a bunch of pedals at home) is that the model type Overdrive (TO 100, 800) sound better because they do not need ... to distort. Indeed, although the effect they restore compressed and remain transparent lamp type ds-chain effects, but once you mount the drive, then you can reach the grain distortion models with the same drawbacks (realism, dynamics etc).
It is no secret, for this price you can not hear the Boss or Ibanez, it will be a little closer, but there really is a gap between the marks and Behringer.
I think their models modulations should be interesting but to play with a distortion that sounds, there is little to be any compromise on this type of sound, which is simple but one that also must be forgotten.
Did you find this review helpful?yesno
»
Read the 9 user reviews on the Behringer Ultra Distortion UD100 »