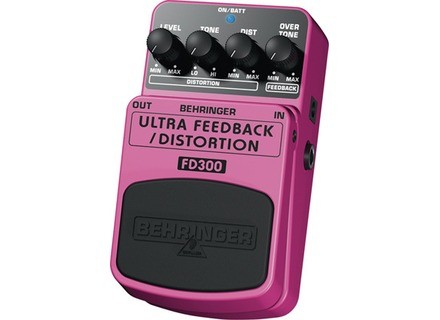 Behringer Ultra Feedback Distortion FD300
3
This pedal is a pretty cheap pedal, I needed a distortion pedal but didn't have a whole lot of cash to spend on one. I went with this because I figured I'd be getting noisy. It's a pretty barebones setup in general, there is a knob for Volume, Tone, Distortion, and Overtone (Feedback). This pedal has no MIDI or computer editing capabilities, and is not rackable as it's just a pedal.

Using this pedal is pretty basic. It's not that easy to get the feedback effect, at least not at a level or with a sound that I like at all. I'm just not too impressed with that effect at all. I definitely don't prefer it to actually getting real amp feedback, which I've enjoyed doing for quite some time now. I don't have a manual but I don't really need one anyway, with most pedals it's better to learn based on intuition anyway. It doesn't take much intuition to realize that this isn't a great pedal.

I really was incredibly disappointed in this pedal all around. You know a pedal is really bad when it makes a great guitar (a 20 year old Fender Strat '67 Reissue) and a great amp (Fender Twin) sound bad. It drastically alters the tone of my guitar to a really undesirable sound. I don't really like this for anything. The distortion itself doesn't have any punch, or body to it. It's anemic and weak, and just muddies up the sound without giving any power. As I said before, the Feedback effect I was looking for feels really artificial and grating, unlike real feedback which I tend to love as it can be quite cathartic and moving.

I don't really know what else to say about this pedal, it's typical of Behringer (some would say their products are hit or miss, I personally tend to think they are on the miss side of that debate pretty often.) It's certainly worth the price, simply because it's so cheap. If you are looking for something that sounds awful, because that's the sound you're going for, I recommend this pedal. Don't expect to impress anyone with this tone, because there's nothing going for it. I would never buy this pedal or recommend it to anybody, and in fact, it's made me never want to touch anything Behringer makes again.
Did you find this review helpful?yesno
»

gentillom's review (This content has been automatically translated from French)

Operation is simple distortion knobs rglages suprieure offer resistance to the previous ones MODELS range Behringer. As against the use distortion and feedback is more dlicat: You press once to turn the distortion and then you hold your foot on the pedals to bring up the effect of feedback. But it is when you want to disable the effect to return to its clear that it works one out of three. This requires a little entrainnement to be able to master properly.

You can also play over the feedback!

The grain of the distortion is very pleasant. Comparable with a Boss DS1 hair supplmentaire gain and less substain we say. The effect of feedback has a cot more "artificial" even if it's still nice. Can be obtained with effect psychedlique (such dismal) quite funny. With a note that lasts for a FIRST TIME you turn the feedback you can disable to reactivate and you will never have the same Tone every time you renclencher effect.

To give you an ide sound of FD300, here is a link for a BMD with Behringer. It is in English but quite explicit.

It's a two in one effect that may be interesting for some express. Especially as the sound of the distortion is really good trs. To purchase, take about 35 euros. Is two times cheaper than the Boss DF-2 that found only occasion of which it is based.

As always with Behringer The housing is made of plastic and Contents in my PDAL Submitted latral a Thurs at the scale of the effect. The finish is brief because the rubber heel on the pedals MOITI dcoll silent when dballage.

For the rest it gives me satisfaction.