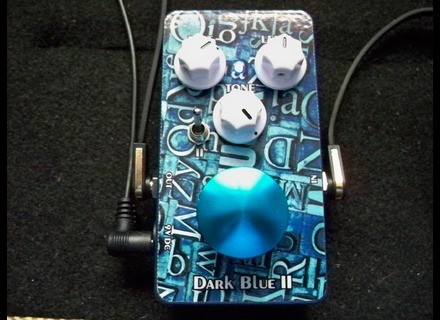 Doc Music Station Dark Blue II
5
SOUND:
A classic sounding distortion, Dark Blue II produces a very decent range in output and drive. When the Distortion is low there is some grain to the tone and a hint of bite.

Once past 12-noon, however, and the Distortion has a fatter and grainier quality and remains surprisingly clear in the mix even when maxed out. Now, there are two stages or modes of distortion: Symmetric (II) and Asymmetric (I), the former of which has a warmer and more classic distortion sound, whereas the latter has a touch more saturation and sizzle. Overall, Dark Blue II is meant to provide a slight edge to your tone at the very least and hard rock when cranked if you decide to go there. It may not be a hi-gain pedal in the modern sense, but it does a good job at pushing an already dirty amp or signal (with Dark Blue II’s Distortion around 9-10 o’clock). As well, it cleans up nicely when dialing back on a guitar’s volume (a heavy rock tone can sound more easy rock). Both of these aspects are demonstrated in the accompanying video.

OVERALL IMPRESSION:
An upgrade from the original Dark Blue, the new version of this pedal includes an input circuit to work under compression and to clarify the distortion (so that it cuts better in the mix and retains its tonal characteristics). This distortion pedal is based on a JEFT OP amp TL072 – this means plenty of warm and grainy textures to drive your signal. At 189 Euro it is a typically-priced pedal that has excellent quality of sound with a boutique flavor. You can choose either a warmer distortion or a tighter and more aggressive distortion via a toggle switch (selecting from a symmetrical to an asymmetrical distortion). The tone cleans up well when you crank the distortion and dial back on your guitar’s volume, and also adds a delicious bite to an already driven signal (while keeping Dark Blue II’s distortion around the 9-10 o’clock mark). Rhythms are very chunky and thick with a tight bottom end, whereas lead lines sound full and harmonically rich.

GENERAL USE:
Dark Blue II is simple to use. The Level knob controls how loud you want the signal, and Dark Blue II does have some serious headroom and volume (start with this set at 9-o’clock). The Tone knob controls the degree of bass and treble in the signal and does not seem to exaggerate any particular aspect (the bass does not sound excessively fat and the treble does not sound shrill). The Distortion knob controls how much grain and drive you want, which varies from very modest at around 9-o’clock to exceptionally thick and heavy when cranked full. As well, you can decide on whether you want that distortion to sound more aggressive and saturated with the ‘I’ position (asymmetrical) or warmer and fatter with the ‘II’ position (symmetrical).

OTHER DETAILS:
A standard-sized pedal, Dark Blue II measures about 113 mm (L) x 67mm (W) x 48mm (H) or 4.4 x 2.5 x 1.88 inches, and weighs 230g/8oz. The heavy-duty metal chassis has eye-catching alphabet graphics with white knobs. The three knobs (Distortion, Level and Tone) are heavy plastic and will withstand normal use and abuse. The toggle switch that controls the type of Distortion (Symmetrical vs Asymmetrical) has decent stiffness and snap when clicked from one position to the next. All knobs have exceptional quality pots (smooth and very solid when turned without any static or noise). The footswitch (on/off) produces a solid click when engaged or disengaged. The toggle switch is next to the Tone knob and is safe from a stomping foot. The output circuit has been redesigned from the original Dark Blue to increase output level, but also boasts high-end audio components (carbon resistors and Panasonic, Wima and Silver Mica capacitors), true-bypass Neutrik jacks, Alpha 16mm faders, and is protected against overvoltage and reverse polarity. The cable input/output and power supply all are located along the sides, and so some modest care is to be taken when used (to prevent foot slippage and possible chord input/output/power output damage). Dark Blue II does not run on batteries and requires a 9VDC power supply (I suspect under 100mA of power, although not clarified on Doc Music Station’s site).