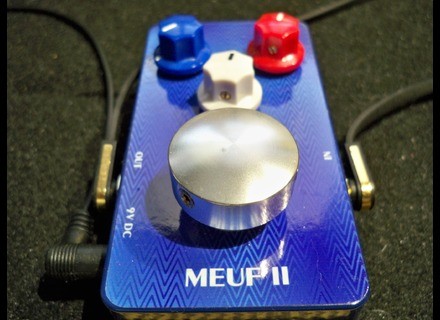 Doc Music Station Meuf II
5
SOUND:
A thick and heavy fuzz-type distortion (more distortion than fuzz, but definitely characteristics of both), Meuf II has a good amount of Distortion even when turned low.

On a clean channel it sounds grainy and thick with a touch of sizzle (very clear in the mix, even when turned up beyond 12-noon), making it an unmistakable distortion-fuzz combination. The tone becomes more saturated and thick around the 1-o’clock mark and beyond. The Tone knob ranges from a heavy and slightly ‘muffled’ or dark low with the bass full to a very clear tone (no shrill) when treble is full. Similar tonal characteristics are true if used on a dirty channel, although the amp would affect Meuf II more due to combining dirt from both sources. If used on a dirty channel, I suggest the amp’s gain ranges between 9-o’clock and 12-noon (and not too much higher), since Meuf II is fairly brutal. In the demo example I had The Kraken V4 Preamp around 12-noon, which was not at its ‘heaviest’ (being around 2-o’clock), but once I added the Meuf II at only 8-o’clock Distortion the tone fattened up with a grainy growl that made The Kraken more beastly.

OVERALL IMPRESSION:
Based on the Ram’s Head schematic, Meuf II has a dual-stage distortion that produces massive gain and great sustain. This second version of the Meuf pedal also has a bias adjustment to manage the attack and aggression so that the tone cuts through the mix better – you get a heavy grainy distortion with a fairly tight bottom end. At 189 Euro Meuf II is a typical priced pedal that is meant to work with clean amp channels. Although it can be applied to a dirty channel (with the pedal’s distortion on low), Meuf II really shines with its distortion cranked beyond 10-o’clock. Nonetheless, if you keep the gain on a dirty amp within reason (12-noon or less) you can add a hefty dose of thick dirt that sounds very nasty in a good way. Although this is part of the ‘fuzz’ collection by Doc Music Station, it does stand apart from the other offerings since it also combines an obvious distortion quality, thus making Meuf II a hybrid distortion-fuzz meant for hard rock and metal music.

GENERAL USE:
Even on low Meuf II has some fairly serious distortion. And so, if you want moderate dirt then keep the Distortion around 8-9 o’clock and with the Level (volume) about 10-o’clock to start. If your amp is fairly clean and you want a harder driving tone, then begin at 12-o’clock (keep the Level around 10 and adjust accordingly). For a very dirty amp, I would keep the amp’s gain no higher than 10-o’clock with Meuf II’s Distortion at 8-o’clock (up just a touch). I then would tweak both the amp’s gain and Meuf II’s Distortion until achieving the desired dirty growl and thickness. I find the pedal’s Tone to sound pretty good around 1-o’clock, although this depends whether your amp/speaker(s) are dark or bright; consequently, I would start with the Tone knob at 12-noon and adjust from there.

OTHER DETAILS:
A standard-sized pedal, Meuf II measures about 113 mm (L) x 67mm (W) x 48mm (H) or 4.4 x 2.5 x 1.88 inches, and weighs 230g/8oz. The heavy-duty aluminum chassis is powder coated a dark blue pattern with white lettering and multi-colored knobs. The three knobs (Distortion, Level and Tone) are heavy plastic and will withstand normal use and abuse. All knobs have exceptional quality pots (smooth and very solid when turned without any static or noise). The footswitch (on/off) produces a solid click when engaged or disengaged without any unusual popping or noise. The chassis is a Hammond 1590B aluminum case that provides shielding of the electronic card. As well, Meuf II also includes high-end audio components (carbon resistors and Panasonic, Wima and Silver Mica capacitors), true-bypass Neutrik jacks, Alpha 16mm faders, and is protected against overvoltage and reverse polarity. The cable input/output and power supply all are located along the sides, and so some modest care is to be taken when used (to prevent foot slippage and possible chord input/output/power output damage). Meuf II does not run on batteries and requires a 9VDC power supply.