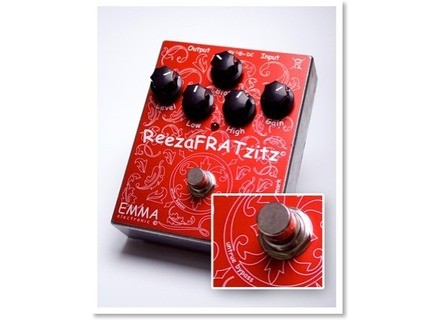 Emma Electronic RF-2 ReezaFRATzitz
5
Distortion / OD in single analog bypass (see the manufacturer). For me it is rather a 'foundation pedal' as they say in Catalinbread ...
Setting: level & gain knobs as on all distos knob 'Bias' pretty cool because to emulate the distortion of an amp Class B Class A, all possible shades in between.
'Low &' High 'also very interesting as to cut or boost the bottom or top of the spectrum, only mids remain stable, which provides what you want, in the lo-fi' scooped mids 'beloved of metalheads.
Operates on standard 9V power supply or battery.

I rather like 'less there is, the better I feel,' and five knobs repelled me a little at first ... But ultimately, it's easy, it's already a fairly standard distortion and very tasteful, no need to book. Depending on what you want in the media and what we already have as settings on his amp, a little hack on the High and Low. Not easy to come across something that sounds shocking or really bad.
You should know that this is not really an OD in my opinion, in my opinion use impractical as a simple boost, she always keeps a minimum of grain, even at the lower gain knob.

This is a pedal supposed to emulate the characteristics of the distortion of a tube amp, and I think it is remarkably good job. For single-channel amps lovers like me, this is a real gem.
I use a Lab Series L9 (combo transistors 70-80 years already sounds fire god), and I have nothing to envy racks lamps. It is not wrong to close a big sound for Marshall, especially from the 'class' of Bias knob.
I'm pretty adept clacking sounds (despite my Les Paul and my 1x15 inches), which is why I use it in conjunction with Driving Concept (of Infanem) for the dirty side, a little garage ... Without it, it is a distortion that does not go to such extremes, it may tend to lo-fi but still quite large in classic sounds anyway.

I since April 2013. I wanted a distortion allowing me to come up with classic sounds while being compatible with more slap OD.
Before that, I went through many steps ... Many fuzzs (Big Muff, Eau Claire Thunder Dwarfcraft Devices, Heavy Machine Mountainking, Pharaoh Black Arts Toneworks, etc..) And modified with a clean blend that has remained faithful to me for a long time Rat. I come now to the more standard to create me a "second channel" on my single channel amp, and I am very happy with the result.
I especially like the easy part, quite mat without being banal, and the sound quality on the emulation class A / B. Lots of headroom, a very right its very low compression, which is super nice when we return to the world of fuzz!
It is expensive but it made me reliable and robust air like no other. Experience will tell if I would do this choice, until it is gone for!