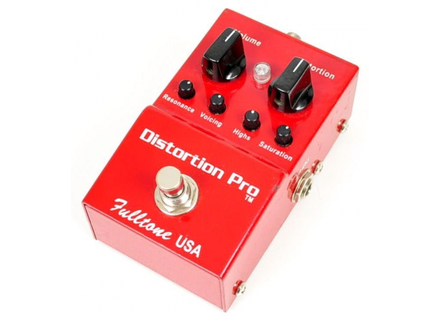 Fulltone Distortion Pro
5
According to Fulltones website this pedal produces the greatest high gain sound you can imagine. From Brian May to Boston, Holdsworth to Eric Johnson. The sound is dripping with harmonics and soul. Layered shades of dirty, crunch, bluesy and it will still clean up well. The pedal has Volume, Distortion, Resonance, Voicing, High end and Saturation controls. Standard Fulltone features such as LED with true-bypass switching along with 9V DC receptacle jack are here in the Distortion Pro as well. The Distortion Pro utilizes a very clever battery hatch for battery replacement.

The box is a little wider than a typical MXR style box. The two main control knobs are for the Volume and Distortion. Under those two knobs there are 4 smaller knobs for the REsonance, Voicing, High end and Saturation. The Resonance knob controls the bass frequencies. The Voicing knob controls the midrange. The High end knob will boost or cut the high end of course. The Saturation adds or removes extra clipping and sustain and helps you dial in the amount of warmth of the tone you want. The smaller knobs are kinda hard to turn and difficult to adjust on the fly The quality and build construction are top notch.

The pedal does exactly what the Fulltone website says. The user manual comes with some suggested settings. There is a "Brown Sound" setting with smooth gain and a punchy attack. This is a great all around hard rock setting. This pedal will sound good with any setup.

Everyone who knows about this pedal wants it. There is a long waiting list to try and get one of these from Fulltone. If you see one on the used market you should buy it immediately then hit the previous owner for selling it. If you want a pedal that can do hard rock to blues or even your own unique tone this is it. It has everything it has the smoothness and sustain with the punchy attack you need. This pedal is for you.
Did you find this review helpful?yesno
»

Fulltone Distortion Pro
3
The Fulltone Distortion Pro is basically a standard looking stompbox that has a fairly typical layout of controls. There is volume and distortion (amount of gain) controls, and below these there are four smaller knobs labeled "Resonance," "Voicing," "Highs," and "Saturation." These basically act as further EQ shaping for the pedal. It promises to be a fairly good sounding and versatile pedal with all these features and the legendary Fulltone name backing it... but in my opinion, it just misses the mark, especially when compared to Fulltone's OCD or Fulldrive II.

As I stated above, there are six controls to tweak your tones. However, (much like the reviewer below me) I felt that the pedal sounded much more processed and "fake" sounding compared to Fulltone's better known pedals like the OCD. The controls seemed to be fairly responsive which was nice, but there was a very digital quality to the sound that I couldn't seem to dial out no matter what I did. I found it sounded cool with the highs rolled down and the saturation turned up for a quasi Eric Johnson "violin tone" sound. Mind you, it still sounded fairly digital, but it was at least a decent tone in a group of fairly sub-standard ones.

I tried it mainly with superstrat type guitars into either of my tube amps (Mesa Mark III head or Peavey Vypyr Tube 60 1x12 combo). At it's best tone wise, it's very "pedal" sounding. I was hoping for something more organic, especially from Fulltone, but it really wasn't happening with this pedal. Aside from the Eric Johnson esque violin tone I dialed in one evening with my Ibanez PF300 guitar and Peavey Vypyr amplifier, I really couldn't get a tone that didn't sound like a very digital distortion. If a very "pedal based" distortion sound is your thing, you might enjoy one of these. For those of us who prefer a more organic tube amp type tone... definitely look elsewhere.

Overall, I was just generally unimpressed with this pedal. I won't bother trying to compare it any further to the OCD (a killer sounding overdrive) or the Fulldrive II. Basically, it was a pedal that, in my opinion, tried to be something that it wasn't. I can see where Fulltone was trying to go with this (an organic sounding, versatile distortion pedal) but really, it just sounded digital and processed. Like I said above, if that sort of tone is your thing, it might be worthy to look into, but otherwise, I'd just stick to one of the truly good pedals out there. There is a reason that Fulltone discontinued this pedal...

Fulltone Distortion Pro
1
I'll be honest here and tell you that I absolutely hate this pedal. I am a big Fulltone proponent, but this pedal comes up way too short. I have played around with 100's of distortion boxes and just as many amps and I know what constitutes a quality tone. Nothing about this pedal sounded good to me in any way. I could have been unjustly comparing it to a OCD, but coming from the same builder I thought this was a huge miscue.

Does this thing sound terrible...? No it doesn't sound like some of pedals I have played before that sound better if they were run over by a car.

There are a few little control knobs and tweakable options that can give you some variations of tone but the overall incapability of this unit just doesn't make you enjoy playing. Everything about the sound of this pedal just scream fake. The thing is completely incapable of sounding natural at all. It sounds like a pedal and nothing like a tube amp what so ever.

It has a volume and distortion control knobs that are the main featured controls. Under neath that there are four little EQ controls that switch the resonance, voicing, highs, and saturation.

I gave this pedal a fair shake and it just sounded terrible. I ran a Fender Strat through it and a Gibson Les Paul and neither one could produce anything capable of playing in a band or even playing at home in my studio for that matter. No amount of tweaking or rolling off highs or turning up the gain or saturation was going to do any justice to my amp. I was playing through a Vox Ac30 and even with a great amp like that which is more than capable of highlighting the positive qualities of a pedal, failed to give me any satisfaction of tone. Perhaps the amp didn't fail but really show that this pedal good not be paired with anything that would make it sound good even under the best circumstances.

I know that Fulltone has now discontinued the building of these pedals and for good reason....they sound terrible! It sounds like a bad Boss pedal trying to be something its not. It won't sound like a tube screamer and it won't sound like the OCD. The OCD might be one of the best overdrive pedals ever created. The Distortion Pro is one of Fulltone's blunders.

I wouldn't recommend this pedal to anyone. It sound flat thin and up pleasant. Try the OCD and see what your missing if you own this pedal already.
Did you find this review helpful?yesno
»

Fulltone Distortion Pro
5
Made in SoCal, 1/4 inch in and output jacks, The two main controls are for Volume and Distortion. Below these two knobs are four smaller controls for Resonance, Voicing, Highs, and Saturation.
The Resonance control shapes the bottom end, the Voicing is a midrange control, Actually a midrange control that is distortion level dependent. Highs will boost or cut the treble. And Saturation is what lets you dial in the amount of how much you want the pedal to act like a sagging tube amp.

True bypass as all Fulltone pedals.

The owners manual is well laid out with plenty of good sounding sample settings to get you up and running quickly.

I have used this with various amps such a THD Flexi 50, 70s Marshalls, 60s Fender Bassman, and it does shine with clean amps turning it into a great overdrive sound. Actually one of my favorite moments with this pedal was plugging a Vigieer Shawn lane model into this into a THD Flexi 50 when recording a Robben Ford cover and getting a very convincing Robben Ford style Dumble overdrive tone.
And funnily enough the pedal sounds equal at home with humbuckers and single coils, as well as with loud amps with band usage as well as practice amps at home. A big surprise that was. Actually I think this is one of the few pedals I’ve used that can have you use Strat into a clean amp and end up with a harmonicly rich, still dynamic sound.

I have used this pedal for many years with loud clean amps, I know of guys that aren’t too fond of it. However most of them tend to use it with amps with gobs of pre-amp gain. I can see how all that cascaded gain would make for a fuzzed out mess. The only other pedal that turns a clean amp into a high gainer is the Emma Reezafratzitz RF-1.
Did you find this review helpful?yesno
»
Read the 7 user reviews on the Fulltone Distortion Pro »