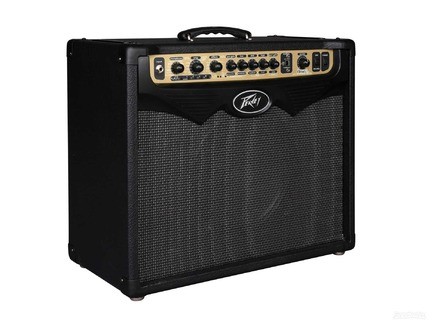 Peavey Vypyr Tube 60
4
What a killer little practice amp! This amp has a very good tone for being an amp modeler and enough features that will having you playing for hours. You actually might be spending too much time tweaking then actually playing so this could be a bad thing. Either way this is a nice bang for your buck all around effects and amp modeling amp.

This is an all encompassing amp that you only need a guitar and cable and you are set. It is a nice amp for those starting out playing on the the electric guitar and mom or dad don't want to shell out too much money just yet.

Compared to the solid state Vypyr series this amp has a lot more dynamic range and punch to the tone. Not a bad or good thing just a personal taste thing. The tone has more girth and tube feel obviously with the added power tubes.

At new these amps come in at around $450, which is a steal if you ask me. For what you get and the options to explore this amp is just killer for the price. You couldn't find a better sounding amp or something even close to the price of this amp. Peavey are masters at keeping decent enough tone in a rather nice price point.

I highly recommend this amp to anyone thinking of getting a practice amp and doesn't want to shell out a ton of money to get. Just need a cable and guitar and you will be good to go.
Did you find this review helpful?yesno
»

Peavey Vypyr Tube 60
4
The Peavey Vypyr Tube 60 is a tube combo amp (1x12) that puts out 60 watts of power. It has a modelling preamp section, with various amp and effects models covering many different sounds. With the optional Sanpera foot controller/switcher you could save up to 400 presets of your own creation... truly cool! Here's the full list of features:

It's got many different features that make it a very desirable amp for sure. I ran mine with the Sanpera II floorboard and had great results overall. There is no shortage of sounds within this amp, that's for sure! Between the 24 amp models, 11 stompbox effects and 11 rackmount effects plus onboard delay and reverb. So many choices!

This amp features Peavey's "WYSIWYG" interface. This stands for "What you see is what you get," and it's very true. Setting up presets on the amp was a breeze for me, and within a couple of days of owning it, I'd already nailed down my clean, rhythm, and lead patches. Since I'm not a major effects junkie, I opted only to use the chorus, booster (Tubescreamer emulator), as well as delay and reverb for some ambiance as well.

Overall I felt the clean/lower gain amp models sounded better and much more realistic and dynamic that the higher gain ones. The clean models had a nice sparkle at lower gain settings, and as the gain got turned up, they became more aggressive and punchier. My favourite clean model was probably either the Fender Twin or the Badcat, as I felt they had the most tube esque tone and feel to the sound. They also sounded cool with one of the "stompbox" distortions or boosters in front for a bit of grit.

The drive tones were decent for the most part. However... the majority of them were so compressed that they all sounded similar. Most of the high gain models (6505+, JSX, Diezel VH4, etc) had so much gain and compression that it was almost impossible to tell the difference between them. Because of this, I opted to use lower gain sounds like the Badcat or Vox AC30 and hit it with one of the stompbox boosters for more gain. This to me produced a much rounder and more tubelike set of tones.

I used the amp primarily with various superstrats with higher output pickups. As stated, I found the cleaner/lower gain models just had more definition and sounded better than its higher gain counterparts. They reacted very well to sensitivity measures such as pick attack and using my guitar volume for dynamics. The higher gain sounds unfortunately lacked this same characteristic, and I found myself eschewing those sounds altogether. The best overdrive tones came from boosting one of the more mild overdrive tones with a stompbox effect. This offered a rounder, less compressed sound that compared reasonably well to the Mesa Boogie Mark series amps that I hold in such high regard.

The effects in this amp were decent as well, though I didn't play around with them as much. There was a good variety of different things in there (chorus, flanger, phaser, tremolo, vibrato, etc) for lots of cool and sometimes eclectic sounds. The delay and reverb were very good in this amp. The delay reminded me of a good analog unit and the reverb had a nice texture for Yngwie style shredding or ambient cleans.

All in all I felt that this was a great sounding and very versatile amp. There were many different sounds within this amp that I enjoyed, and having the tube power amp was a bonus as well. For the $450 price tag new, I think this amp is a fantastic bargain. If you factor in buying a Sanpera I or II foot controller ($100-200 depending on the controller) then you have a great rig to gig with that's portable and sounds cool. My biggest issue is the overcompressed drive models. They sounded cool at home levels, but as soon as I got the amp into a band setting, I had change all my distorted patches just so I could cut through and hear my rhythms and leads. Baring that, it's a fantastic amp, and being that it's a Peavey, I know that I'm buying a good product that will stand the test of time.
Did you find this review helpful?yesno
»