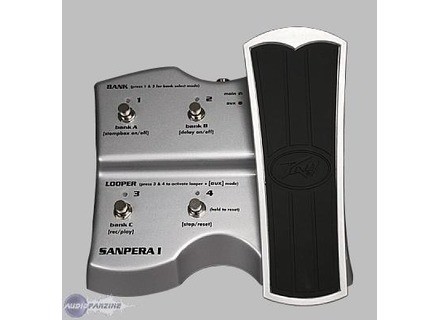 View all offers for Peavey Sanpera I »

jijisopretty's review (This content has been automatically translated from French)" Compact but limited."

Peavey Sanpera I
3
I used the Sanpera 1 for a little over a year. The first I bought slammed four months later, even recognized by the amp (Peavey Vypyr 120). I did spent a guarantee and after more than 3 months of waiting (!), I received the new one and it still works today.

Remember that? Apart clean Peavey (I do not) kikoo design, it does its job. It very simply accesses a preset to another kick. on the other hand, when you need to perform another action (activate the delay, effect, change banks, activate the loop, ...) must be made at least two actions pids. Full piece is unmanageable.

Add to that a lag time of about 1/2 seconds of between 2 switch between presets and you have won everything.

In terms of price / quality ratio, I think it is not worth. So invest a little more for the Sanpera 2, although more efficient and ergonomic.
So no, I will not repeat that choice, and for good reason, since I bought the Sanpera 2, it is much better.

grateutosaure's review (This content has been automatically translated from French)" I still cry ..."

Peavey Sanpera I
1
I use this pedal PLUS for 1 year or more, I used to just one year.

I have not tried other models before, I think the problem was the same with the Sanpera II (more expensive though), I should have listened to switch to buying the amp (error Youth ^ ^).

What I like most about this pedal: The look, as it is can not screw it up and then it not tire of watching ...

What I like least: everything else, when something made me catch migraines non-stop I do not like too.

Let me explain:
When I bought it, I was happy,: beautiful pedal, sturdy appearance, is detected by my amp (Peavey Vypyr 75w), LED visible, and have a footswitch with wah and volume is pretty cool!

At first no problems. After a few months, I started to play in a group and then the problems started. When I pressed a switch, there was a pretty bad latency, not three seconds but no longer move from one channel to another became a hell, and I often found myself either behind or ahead in the change of atmosphere, thank you - '

Then the pedal to start messing around, the LED is lit at haphazard, need to unplug and turn the amp several times until the pedal is detected and ultimately more wah or volume!
I went to walk the guarantee (after 6 months) and I got another model, brand new!
Guess what: it happened exactly the same with the other! And when the second slammed to, the warranty had expired, as you say it is painful!

And looper? What an idea to make a loop with a volume of sick? Peavey folks, this is a bad idea: you can not play along, simply. Or it must reduce the post gain and sudden death means more when the loop is recorded!

You will quickly understand, I judge the quality / price ratio horribly wrong, although it is likely to do a good deal in the first place.

If it again I would buy a stand and jacks with 75 euros, I really feel to have wasted.

The amp is really good, but what a disappointment this pedal!

Lpu123456's review (This content has been automatically translated from French)

Peavey Sanpera I
2
I do not mean much ... great deception on the part of peavey ...
I receive my branch I pedal through the port and MIDI ... nothing works it adtraqu my amp! The buttons do not activate or do not have the right features. The volume pedal does not work when you drop a little sound I have no sound and I can turn the amp. wah wah pedal the same thing I down a bit and then over the ottoman. Must be pressed like crazy on the pedal to switch.
The only thing good is the loop recordable when it works, is safe but if its too loud and clear so it's hard to play it!
Short total disappointment I returned and thankfully otherwise I would have been furious to have wasted 70! Vive Peavey ...

Weaknesses:
- Be supported as the animal to trigger the wha (maybe it will get better Apers uses)
- The unmanageable volume loop recorded. Basically it is quite strong and the improvisations are made over a smaller volume. This is also a mystery because of the videos on Youtube is not the problem ... it is in any case a great default ... which reduces the attractiveness of the effect.

So in the end very well to change the patch, play wha pedal and volume.

Addition to the 20 August 09: the pedal will not turn on the ignition with the amp ... you have to unplug the cable and plug one or two times to make it DEIGNE life ... and 2 points lower (on from 7 to 5)!

Did you find this review helpful?yesno
»
Read the 5 user reviews on the Peavey Sanpera I »

See all 7 photos of Peavey Sanpera I »