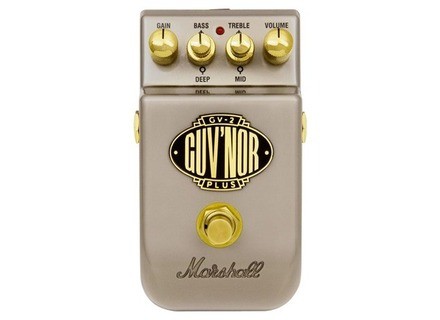 GV-2 Guv'nor Plus, Distortion from Marshall in the Effects series.

View all offers for Marshall GV-2 Guv'nor Plus »

Marshall GV-2 Guv'nor Plus
5
I have tested the Marshall Guvnor 2 and it will soon be on my pedal board. My pedal board has 47 pedals on it and I use them all. I am in a 3 piece Indie alternative band.
We do all our own tunes. I write with the bass player. I tend towards a distorted tone. She loves the aggressive nature of this approach but she sounds like Nina Simone. Not on purpose..it is just built in.
We often start a tune with could pass as an intro on the first Black Sabbath album...but that could quickly lead into vocals with a lighter sound...even my Martin.
So I use 6 overdrives starting with the light sounding ts 808 and go right up to a Heavy Metal overdrive. I am always looking for an overdrive that is rich and full but will lay down nicely behind the vocals. The Guvnor 2 does this well.
It is a Plexi sound most certainly and I have another myself. What is different is it has a knob that adds the resonance of a Marshall 4x12 cab. this makes the sound having a breathless gasping for air quality to the low end. Nothing else does this.
Did you find this review helpful?yesno
»

Marshall GV-2 Guv'nor Plus
5
i used to have a boss SD-1 overdrive padel i bought from my guitar teacher to replace the horrible distortion on my amp. playing for a few months i got sick with the overdrive pedal to, so i went for the music inn to get me a new pedal.

i whas looking for something in the direction of the Boss DS-1 or DS-2 but they where sold out. i knew they where good pedels and i knew what they sounded like. he next showed me his entire pedal collection, including the new marshall effects

what i like.. you got a few hours?!?! no realy what's not to like about it. the Gov'Nor 2 has kept much of his old sound and feel. however they have added a deep knop that can modify the bass in you sound. also has the volume of the pedal been increased.

the sound is great and the pedal is almost like a second amp (or 3de or 4th etc.) it gives every amp i tested the pedal on a wonderfull sound, and the different options keep amazing me. from smooth fat bluese to hard smashing crunch (maybe not as hard as the Jackhammer, but it can keep up) and from screeming solos to the most weirdest of destortion effects. i'm shure that you will be able to create a other sound everytime you play, if you so wish.

well, there are only a few things i don't like about the padle. the first is the footswitch. compared to the Boss paddels it sucks. ist's small and not verry nice to press. and that counts dubble if you are just on your room playing around with it and wear no shoes.

the second think that i could see as small problem is that it's hard to get the distortion sound you want. there so many options in the thing that some people think it to complicated. it's not couse it works the same as an amp, but it takes a lot of experimenting before you have a sound you like. and some people find that a problem

the construction and quality is of the pedal is great. the casing is verry strong mettal... in fact the whole pedal is, and i'm shure that this pedal is better build than the Boss and Ibanez pedals, and that it beats most other pedal casings i have seen.

the activation button might not be that pleasant for activation, it is strong. verry strong. i remember when i droped my boss pedal once the activation swich had flown off and i had to reatatch it.. a thing that i think would not happen to this pedal even of you droped it 3 floors down

great all improved version of the old Guv'Nor, yet it remained it's load of posibilities and great sound that made the first version so popular. it verry sturdy and i'm shure it will never leave you down as soon as you need it

Faber_FDM's review (This content has been automatically translated from French)

Marshall GV-2 Guv'nor Plus
5
Same as the other.
I normment appreciates the equalizer, and the knobs sleep. This is the class of Marshall pedals.

It's really too simple.
Positions indicated in the manual are really useful.
Deep Boost is a very intressante option, I recommend putting donf.

I find the grain really good, very vintage.
But the characteristic that I prefer is the boost deep which makes for really powerful bass. And not just to make Mtal - I do not worry.
Just because a coronation adds a presence in the sound.
I put the gain just above the half - say less than an hour, I dig the sound a bit - 11:00 mediums, I put the bass and treble 3:00 1 hour.
With a, it was a great sound indie pop, and not as Marshall typ than what they say. The distortion is very natural regardless of the level of gain.

I exchange against a Tech 21 Double Drive, it is to say how much I wanted!
I loved the Tech 21 but the tone knob does not allow me to get the sound I wanted. I wanted to sound a bit more and dig a little acid highs. That said, I had some fears because of some scathing reviews I had read.
I am totally reassured and convinced by the quality of this pedal. The grain is really vintage and totally realistic.
In addition, it works for all kinds of uses. I used repetition in my Power Block very high volume, but also to the headphone with a speaker simulator or low volume at home, and in any case renders a its large and powerful.
A true Russianness for me.
Did you find this review helpful?yesno
»

Tacsy's review (This content has been automatically translated from French)

There is only its not really famous. Lack of consistency.

I've had it for years, but I just try there is little

Did you find this review helpful?yesno
»
Read the 16 user reviews on the Marshall GV-2 Guv'nor Plus »

Marshall GV-2 Guv'nor Plus manuals and other files