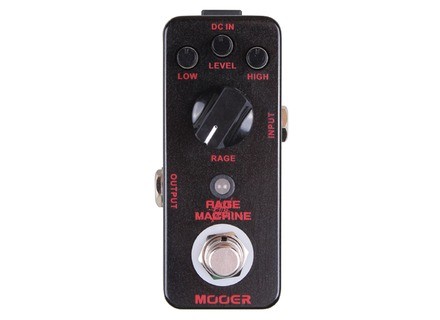 Rage Machine, Distortion from Mooer in the Micro series.

Ultra simple setup, plug, turn the knobs and chose the sound you want!
Manual in French (please) but useless because it has no need.
I put 8 because the knob and boost level are all black! I added the blanco in the groove to show which side it is turned (sorry I do not know how to say) and since no problem!
The hands have a big fingers can be a little difficult to turn them because of their size too.
9 after putting the blanco!

Ultra efficient effects! I play Marshall JTM 612 (ECC83 and EL34) with a Hagstrom Swede (2 humbuckers kinds bam) and I wanted a more "beefy" as the distortion on my amp stops 70's rock. I already had a distortion pedal (nano metal muff) but I found the sound too "chemical". With MOOER, no comparison!
I play several kinds of metal or heavy, genre ranging from system of a down, slipknot, rage against the machine, POD, scorpions, metallica, gun's, papa roach, linkin park (hybrid theory), Limp Bizkit, transplant van halen etc. ...) and it happens in all styles seamlessly with ultra realistic sound!
Of course it is not suitable for playing blues or rock-type phone. It allows you to switch between the deaf and would have almost a little wha (knob rage all left) to its ultra sharp sound. The knob are well spaced and allow plenty of sonic nuances. The notes are well defined despite the "mushy" side of my microphone.
on the other hand I do not know what happens with active pickups or a transistor amp.
It even comes complete bass sound of my Marshall has not a lot!
It respects still the sound of the guitar and the amp and not too out of breath.
The true bypass can have no coloration of the sound when it is switched off and it is very significant I think.

I use it for about a month and I had tried several models before dwell on celle_ci to find a pedal with the versatility and sound I was looking for: boss ds1, ds2, md2, mt2, dn2, a visual sound of hyde, MOOER secret black, hustle drive. I also had a behringer overdrive / distortion, a boss ME20 and my nano pocket metal muff, played boss ME50 and marshall jackhammer.

Like most sound definition and notes, versatility (in kind of course) and true bypass.

With the experience I would do this choice because for the 96th, the manufacturing niquel, features and also the perfect sound!
Go try it if you get a good pedal heavy / metal and you will leave with you I guarantee! (Do not forget to take blanco passage ^ ^)