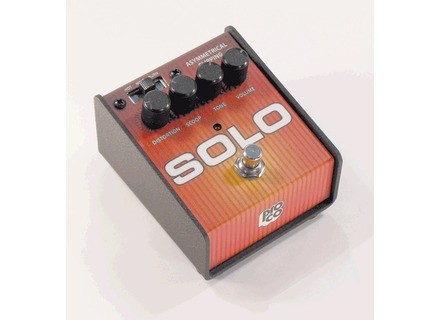 ProCo Sound RAT Solo
4
The Proco Sound Rat Solo is a distortion pedal that is designed for electric guitar and has standard 1/4 inch connections.  It can be powered by a nine volt power supply or battery and isn't rack mountable as it is a stomp box.

The make up of the Proco Sound Rat Solo is extremely easy to follow as there really isn't anything out of the ordinary here.  The pedal has knobs for distortion, scoop, tone, and volume and has a switch that has modes for hot, melt, or burn.  There isn't anything to the pedal other than this and I found that it didn't take too long for me to have a full grasp of the entire pedal, so for this reason I don't believe that a manual is needed.

The sound quality of the Proco Sound Rat Solo is mediocre in my opinion.  I think they designed the pedal for solos as the name states and is probably best suited for lead parts rather than rhythm ones.  I have used the pedal two or three times with my Fender Strat and '76 Twin Reverb, so I'm getting an accurate read on what this pedal actually sounds like.  While I haven't been too impressed with the pedal, it doesn't have that bad of a sound overall I just don't think that it is up to par with most of the distortion pedals that I use out there.  I usually like the pedals that Proco Sound put out there, but this is an exception to that.

I've only used the Proco Sound Rat Solo a few times in the last year or so and I don't think that I will be using it again anytime soon as I'm just not a big fan of the way that it sounds.  It is probably a bit over priced as well and I would recommend just sticking with the original and vintage Rat pedals over this one as it will cost less and in my opinion will sound a lot better.  All in all, the Proco Sound Rat Solo pedal is a mediocre pedal in my opinion.

jazzmaster's review (This content has been automatically translated from French)

Proco is: simple and effective.

Probably the brush all the rats, scoop knob (medium filter) results is excellent sound for solos and harmonic rich medium, either rhythmic sharp at the limit of heavy metal.
The switch 3 can increase the output level and spirit of the pedal, the "hot" sounds very vintage with a lot of distortion and it is rather in a spirit fuzz, the "melt" increases the output level and provides a more modern but still a little fat, the "burn" provides a very powerful and defined distortion.

For me it's the Rat's most versatile, excellent for a game lead because if the switches can have the mind of the other models (hot rat = 2; = melt you dirty rat, rat burn turbo =) it is especially more powerful than all the others, the grain is more suited to a game in front of the mix because the sound is much more corp.

RiLf's review (This content has been automatically translated from French)

The general configuration is simple.
Must spend some time on set to find the sounds that kill everything, but once found, it is ecstasy!
The knobs are progressive, and when you turn a knob a little, there a difference in the sound, unlike some other brands.
The switch is a bit brutal, but you get done.
The case is the strongest and most convenient pedal that I had for now.
It's a bit heavy, and must admit it is a bit ugly this pedal, but it does well

Then there is the strong point!
I was stuck when I tried this pedal!
Already, the Solo is a sound of madness, not synthetic for a penny (bye Boss!), It's hot, it couillu, it wakes you up a cemetery full! It's like really with the distortion of an all-tube amp pushed well!
What's great also is that it is very versatile. The overdrive is terrible (that's my opinion, and fan TS9 do not end up there I think), we not lose momentum, it's very nice. The slight distortion (see a little less light) already sends the wood by altering the tone is reached sounds really interesting (the crunchy sound dull style stoner), but between the two is the seventh heaven! And when you arrive (in town, the whole world is changing sidewalk! Oula, I had a return of Balavoine) I said when we get to the big distortion, there is the Apocalypse! The palm mute stand out too well, it was a big sound to pull the string of Paris Hilton at the other end of the Earth (if it has one: p).
on the other hand I know why they called "Solo", because personally, I find that it is slightly better than solo rhythm (although it's great solo, too).
Well, must be prevented, but the grain Proco, so you must try it before you buy!

I use it for 3 months.
What I like most about this pedal? Just about everything. The rugged, warm and dynamic sound, which sends many potatoes, versatility, ...
I tried a lot of distortion and overdrive before buying one: Boss (BD-2, OS-2, OD-3, DS-1), MXR Disto +, Proco (RAT 2, You Dirty Rat, Turbo Rat). The Boss: too synthetic, cold enough, and enough knobs progressive. The MXR is a total crap, a bee, you can not play properly with it. The Proco are fine, but Solo was more versatile, so I took it.
The price of this pedal is slightly high, but if not go Gillou (www.audiotubetech.com (http://www.audiotubetech.com)), we can have it at € 120. At that price, and given the quality of the pedal, I think it's as honest price.
With experience, I do it again this choice, of course!
(I may even buy me another, that way I'll have one for the overdrive and distortion for a)