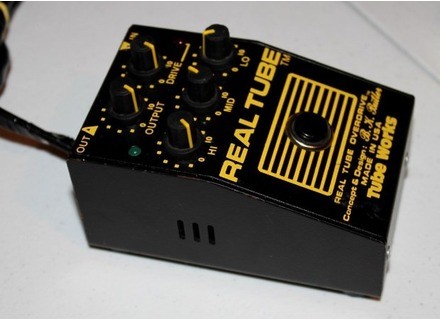 Tube Works RT-901 Real Tube
4
I bought this little ( well, not really little! ) gem back in 1988-89 to replace a Washburn "Stack-in-a-Box" distortion pedal that bit the big one. I bought(what I believe) to be one of the first units in the Seattle-Tacoma area from Performance Music. A local music store ( no defunct ) owned by my good buddy Al. I liked the idea of a real tube ( 12AX7 ) in the unit. I paid about $70.00 back then, list was about $120 if my memory serves correct.

I love the fact that you can get just about any amount of distortion you want out of this. From a clean boost, to a metallica roar and every thing in between. I like it best set to a bluesy grind. Great sustain and natural warmth. It's also fun to max the drive and go into heavy metal bliss once in a while. It has a level and drive with bass, mid and treble controls. It is hard wired with an AC plug ( nice touch ) so you never have to worry about your batteries going dead. Built like a brick Sh_ _ house. Nice job of hand wiring inside the unit. I have tried several different 12AX7's in it and also a 12AT7 to see if it made a difference. The 12At7 turned it into a fuzz tone!! Pretty cool, but not what I wanted. I ahve an old RCA 12AX7 in it now. I have read most players who own these put in a NOS 12AU7. I will try that next as soon as get my hands on one!.

I dislike nothing about this unit. From the solid construction to the excellent sounds it produces, this is a keeper. After all, it is over 12 yearss old and it looks like new and sounds better than ever. I have tried at least 20 different units from Fab Tones to Tube Screamer to Valve Tones to Boss, DOD, Blah...blah...blah ( you get the picture ) and none have replaced this unit yet. 5 years of every night ( when I used to play out ) stompin on it and it still looks and performs like new. Don't get me wrong, I'm sure a Hot Box, Burn Unit, Klon, etc. would more than meet the challange, but look at the $$ difference were talking!! For the coin, you would be hard pressed to find a better sounding, better constructed unit.

If you can find one, buy it!! I can't wait to find a NOS 12AU7 and pop it in. They are supposed to warm it up and lower the gain a bit. Since I play the blues more than any other type of music, The warmer low gain grind just may be my ticket to sonic shambala. When I put one in, I'll follow up this post and let you know how the experment went!!

Tube Works RT-901 Real Tube
5
A pedal steel body 100%. It is very solid, but do not bully because it contains a lamp.
It presents five potentiomtres: it allows many possibilities of rglages.
Activation of the overdrive is done by pressing a tiny button flat.
Availing oneself of it's own power cord (mine is still taking amricaine with two flat ends!).

Usage is simple: it's a pedal ...
However, the small flat button makes it difficult to activate the effect. Personally, I have to tape over a piece of heavy cardboard to activate more easily.

This pedal is not meant to be a sound "crunchy" prfrer Blue Tube ( see picture ( http://www.effectsdatabase.com/images/gear/TubeWorks_BlueTube_l.jpg ) )
The sounds are really good when the overdrive is turned back: Sounds very specific on and at the same time very powerful. The qualiseur is very effective.
Personally, I put my Real Tube upstream of a multi-purpose.

I use this pedal since 1991! I did with her many concerts.
That's the kind of effect that we must maintain: beautiful sound, beautiful quality manufacturing and reliable pedal.