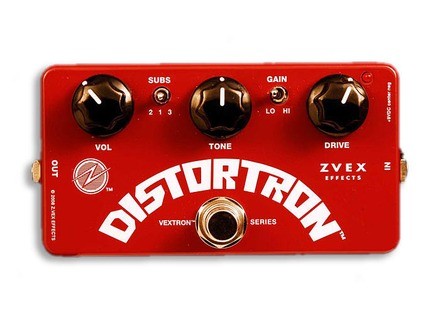 Zvex Distortron
5
Out of all the various effects and distortion boxes that Zvex makes, I have to say this is by far my favorite one. It is unique in that they recommend you putting this at the end of your signal chain. Intersting because most distortion boxes go at the beginning of your signal chain. I guess as Zvex describes it as the engine side of a Box of Rocks pedal.

DRIVE: Sets the amount of distortion. Start around 1:00 o’clock.
TONE: Adjust for treble content. Start around 2:00 o’clock.
VOL: Adjust for output volume
level. Start around 9:00 o’clock.
GAIN Switch: “Lo/Hi” lets you choose standard “Box of Rock” gain level or a slightly boosted level.
SUBS Switch: “2-1-3” lets you choose the full “Box of Rock” sub amount (3) or two different lower levels of subs depending on your amp’s needs.
DRIVE: The Drive is based on the original Super Hard-On gain control, so it may crackle when turned. This is perfectly normal. That’s why it says “Crackle Okay” by that knob(on the Super Hard On pedal not this one).

The pedal sounds huge when put in front of a Marshall style amp. The tone is so natural and creamy that it makes you want to play the guitar for hours. I love the tone you with a Gibson Les Paul or another humbucker style guitar slamming the front end of your high gain Marshall head on a semi dirty channel. It gets extremely huge and thick. Another great ting about the voicing of this pedal is you get the saturation when its engaged but you still hear the individual string separation of your guitar. It is a very transparent pedal that works well with any guitar and any amp.

These units come new at around $150, which is a great price for what the pedal does and sounds. I like the tone of this because it take your guitar amps tone and give it a modded sound. It is like taking a Marshall and having it modded to be a hot-rodded Marshall sound.

I would recommend this pedal to anyone who owns a Marshall style amp and needs to get the amp cooking without having to crank the volume up to ear bleeding levels. The price is fantastic as well. I have never seen another pedal like this so I can't give another recommendation. If you get a chance to try one I don't think you will be disappointed. its not an ordinary distortion box.
Did you find this review helpful?yesno
»

albou's review (This content has been automatically translated from French)" Truly extra !!"

Zvex Distortron
5
The Distortron Z.Vex is, according to the brand, "the little sister boosted the Box of Rock." Having never tested I could not confirm it, but maybe is it the same basic components.
In the case of Distortron, it is a pedal overdrive / distortion (see below) trying to reproduce the sound of the mighty Marshall JTM45 and with 3 knobs (volume, tone, drive ... classic ) and two mini-switches (a 3 position switch levels subs, and a switch to boost the gain level). A priori analog technology, it is possible to power via a battery or standard 9V battery.

Regarding the knobs, nothing revolutionary, the magic trio is still his work! If revolution there, it is located in switches: one can choose three levels of sub-bass amps and depending guitars used (1 is the minimum and max 3), the second switch (lo or hi) allows you to send an overdose of gain to the signal ... or not.
Around the tone knob it says "crackle okay" which translates as "normal hiss" when the pedal is activated and it turns the knob drive, it actually means sizzling, and so it's normal !
To conclude the three knobs are super simple to use, but in addition they are very reactive and the sound quality of 10/10 to 1/10 are impeccable.
Use: 10/10 no complaints!

I have never witnessed the legendary power sound JTM45 but I doubt that a small red box can highlight the same power in a Vox AC15 ... This does not prevent that same box gonna cum! Despite its name the pedal is as much an overdrive distortion, depending on the level of drive and choose especially if you put the second switch on "hi".
But back to the sound itself, is ecstasy! I would not have thought I could get it with my gear. A well burnée overdrive and the Stooges quite honest, that's what suits me, and that's what I get !! Also the possibility of lowering the gain with the volume knob on the guitar allows things well, especially live.
Finally, it is a very good pedal fitting in the vicinity! All pedals placed before will be transformed by the Distortron.
The quality of sound out are superb, and it has an inexhaustible reserve gain: With the switch set to hi, the drive does not exceed 5/10!
The sound is perfect!

I use it for more than 6 months and I have not yet found all the possible combinations, but those that I already used suit me very well. I bought it used 80 € and I think it's a very good deal, € 120 (on the internet) it is a little expensive but it's still a great pedal!
I had never tested any Z.Vex before and when I see what can be the cheapest model I'm very optimistic! Regarding the Distortron, what I like most is of course the sound but also the two switches that change some of the old traditional "vol / tone / drive" even if the pedal is hell from the start . The only downside (to play the real finicky jerks) would creaking you hear when you move the knob drive ... I still say that in the year of grace 2014, it would still have made a scientific discovery to prevent this from happening ... Well if that's the price to pay for EC's, so I'm willing to pay and sometimes twice a !!
With experience, I would hesitate much shorter before buying ^^!

Zvex Distortron
5
The Zvex Distortron is a simplified version of the Box Of Rock, psych without painting made by hand by a vtran "cass face of Vietnam. This explains the price for an unusually Zvex democracies. This is an overdrive (with a lot of gain all of the same), which mimics the sound of a "Marshall JTM45 gnral volume without any ten." The PDAL has three potentiomtres, DDIS in volume, tone and gain. That last crack when the dplace is thundering, but normal according to the instructions. Added to this are two switches. The first lets you choose two levels of gain, the second has three positions "sub". Understand the three levels of bass. entrance, exit, an internal or external power and a nice box mtallique, a operation indicator, what all the pedals are not a prvaloir. Technology is Fully analog. I put the knob 8 causes cracking.

You will enjoy fast trs, firstly because of the simplicity and partly because the rglages trs are effective. The instruction is in English, but hey, as long as the lgislateur not produce a law to make the record in French mandatory for every product sold on the ground Fran ...

The sound is superb. Compar a Maxon 808, it compresses less, seems richer and n'crase not low. It also offers more high mdium and treble. You can get a beautiful sound the old Marshall, ractif, warm and full of harmonics if only one has a proper amp to plug it. It complies with the guitar and the amp that it is associated. The Distortron does not produce excessive breath. Note also, like any overdrive it can serve as a boost to push a distortion amp. The rglage low gain switch allows for a sound that can be made clear by turning down the volume on the guitar. A rgal. Finally a rich overdrive is not limited boost mdiums. It was more the feeling of hearing one channel amp overdrive lamps that type TS. INTERESTED it when you want to keep the momentum. I use it with various guitars and amps that it would be tedious to list here, let's just say that I prfre the pedals with a Gibson. With an LP and a good amp, it is in the woman tone. Happiness.

I possde for almost two weeks. It offers a really got my trs his beautiful, with lots of gain, just as usable complment a distortion without losing any momentum. The report quality price seems honnte trs, worth 130 euros, but has nothing to do with sound and without synthetic personality of a Boss for example.
HS: I see that we can put the smiley, but only "positive". Is it to avoid any criticism against incendiary a bad product, like the magazine that never test a bad hardware?

Zvex Distortron
5
Overdrive, distortion than close to the sound of a MTJ with all the knobs to 10, ideal to put in a chain with other overdrive, setting low possibility of very useful (depending on whether the amp is dark or clear), Zvex typed, the muse etc. .......

perfect on an AC30 with a TV or p90, I think it would sound good with any amp lamp

I only used a few hours, I find this perfect model, but it does not match the sound I am looking at value for money, nothing wrong, it is a "box of rock" quality affordable Zvex for the brand

See all 141 photos of Zvex Distortron »

View all 4 videos of Zvex Distortron »