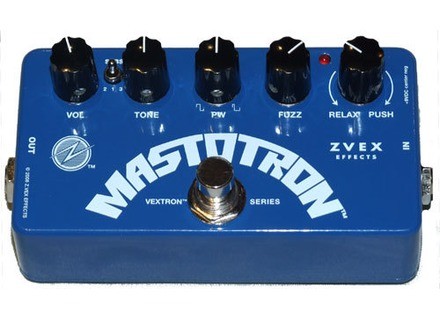 Zvex Mastotron
5
The Zvex Mastotron is a unique distortion/fuzz pedal for electric guitar. It's an analog pedal consisting 1/4" connections for input and output and has options for both a nine volt battery and power supply - they actually give you tips on what is best to use in different situations. It isn't going to be rack mountable as it's a foot pedal.

The make up of the Zvex Mastotron has both familiar and unique parameters. I like the configuration of pedal as it gives you a lot to work with in a small box. From left to right the parameters include knobs for volume, tone, pulse wave, fuzz, and relax/push. It also has a switch for choosing the amount of sub frequencies wanted. The relax/push knob is definitely the most unique, as it is for setting the impedance and can come in very handy when using different kinds of guitars with different pick ups, as it basically adjusts the sensitivity. A manual shouldn't be necessary, although I haven't seen one so I can't speak to it's make up.

The tone of the Zvex Mastotron is seriously thick and fuzzy, but it has great tracking and it's easy to make musical sense of the sound unlike many other fuzz boxes out there. It's perfect for getting that thick and crunchy fuzz tone that still sounds almost clean and precise. It's definitely a modern sort of sound, but again there's a lot of room to mess around between the more traditional parameters and then the parameters like relax/push (impedance) and the ability to set your sub frequencies.

If you're looking for a versatile fuzz and distortion box that gives you more control than your average pedal, the Zvex Mastotron is absolutely something you should known about. It's not going to be the cheapest pedal out there, but it's also not the most expensive and is actually a pretty good deal considering the amount of flexibility and high sound quality you're getting here. Definitely check this pedal out if you're looking for some serious fuzz/distortion.
Did you find this review helpful?yesno
»

Zvex Mastotron
5
Jack connectors and standard 9v DC
Settings Fuzz, Tone, Volume usual
Bass, PW and specific impedance
I did not open but given that there are patterns Mastrotron DIY, I would say it is analog.

- Fuzz increases the amount of distortion depends on many Impedance control (which is explained later) and
- PW can adapt the sound to the acoustics of the place where you play like a Presence (or contour or texture according habits) aerating the sound when the increase
- Tone lets the treble output Fuzz when it increases
- Volume is starting to slightly boost when more than 12
- Bass allows for three levels of low (none, medium, large). I would have added that low bass Dry unaffected by the fuzz
- Impedance is the setting that allows the foot to stand most other Fuzz pedals.

The impedance setting allows for control over the impedance load the Fuzz. More one increases, the impedance between the Fuzz is low and makes extreme.
Thanks to him, it is no longer necessary to place the Fuzz closer to the output of the instrument.

With Fuzz at 12, PW 7am to 7am and Bass Tone on 3, the impedance setting:
- 7am ​​to give a crunchy sound boomy-
- 10am-11am gives his velcro
- From 12 to beyond gives its over-saturated
In general, I would say that the more you turn the impedance, Fuzz, PW and Tone settings to the right the effect is more intense or uncontrollable, and loaded in medium and medium-high.
For a bass player is to run the risk of seeing his beloved guitarist significantly increase the volume of his amp "inadvertently"

I play an active bass thus provides a low output impedance making my Bass BigMuff Pi extremely extreme even with very light settings before I understand how Fuzz pedals work and the impact of the impedance of the instrument thereon.
The same thing happens when the Bass BigMuff Pi was placed behind another effect activated or not true bypass (Boss TU-3) Tuner.
In the end I sold the Bass BigMuff Pi to buy Mastrotron that allows me to regain control over the fuzz without changing my Neither go into passive mode or hack my Volume string instrument.
All without losing my bass with Bass setting and maintaining the ability to have a very extreme sound.

LeoSpirit's review (This content has been automatically translated from French)" Not obvious, but its excellent"

Just by seeing the controls we understand that it is not simple. Be sought before what you want. But it is doable.
The PW (pulse width) is interesting, I'd say it makes the sound more or less "fat".
The impedance depends if you plug a passive pickup, active or an entry type line ...
Treble and bass switch its also handy to modulate the sound.

It's really very very good ... when we managed to resolve it.
It's a fuzz to the sound quite modern but is rather versatile with all the settings. I play with a lot of different things: MUSE, M, Song 2 by Blur, White Stripes-style ... Once you get used to it can do just about everything, but need not be expected to be the exact thing ... otherwise have to buy the same pedal

I've had about a month I used it at home, in rehearsal and recording (home recording). I always find a sound that suits me perfectly.
I do not have much basis for comparison, before I had the Tonelab LE fuzz that was pretty bad. I do not really know how it is positioned relative to the market and everything but my ears tell me it's very good, the only drawback is a little complicated settings. At the same time it brings the versatility is what I wanted: not a thing with two buttons.
What I like most:
- Super strong case
- Great sound
- True bypass
With a little more money that would not mind paying the new, I feel it will last me very long.

Totolight's review (This content has been automatically translated from French)" Exploitable and original!"

Zvex Mastotron
5
It's a fuzz pedal analog very good. The metal case 11 x 6 cm exudes quality, its format allows it to integrate easily into a pédaboard. Power is supplied by 9 V battery or a power boss. For my part, I branch on a string but a priori it consumes only 1 mA so it should not eat too much battery.

The pedal is quite difficult to take in hand. There are five different settings, some very explicit: vol, tone (ok not worry about that), and Fuzz (Big Muff is like the more you put more fat is ...). By PW cons (which changes the waveforms) and relax push (which adjusts the impedance) are setting harder to grasp. It also has a 3 position switch "sub" to adjust the bass level. All knobs are very sensitive and directly affect the sound. They interact a lot of them hit the possibilities are numerous. We must therefore spend time to understand the workings of the beasts, and 1 month of use I still have not done the trick.

In terms of sound is a Big Muff in much better. It is very versatile palette of sounds is very important. The impedance setting lets get lo-fi synth sounds really interesting (I should mention that I use the effect with a Telecaster and a Vox AC15). With a wha (Glab) connected upstream harmonics are obtained incredible solo worthy of the most outlandish of the Queen of the Stone Age. We can use the effect-note or power chord, but like all the fuzz is difficult to exploit in full agreement. In short the sound is very distinctive seventies, I think we can easily combined with other effects to the inverse of a big muff which she tolerates well. It is stated on record that we can easily use the mastotron with a synth or a bass, to do so.

I use the pedal for 1 month. I am very satisfied with my purchase. The pedal is very good and is easily exploitable if you look a little on the settings. I had in my possession a big muff and a boss turbo distortion and I also tried a fuzzface (something red and round ..) but I found the sound is very exploitable (big muff, fuzzface) is not very original ( distrorsion turbo, which is not a fuzz, but I used it as such). This pedal offers everything what I was looking for a long time so I'm happy !!!!!

See all 111 photos of Zvex Mastotron »

View all 4 videos of Zvex Mastotron »