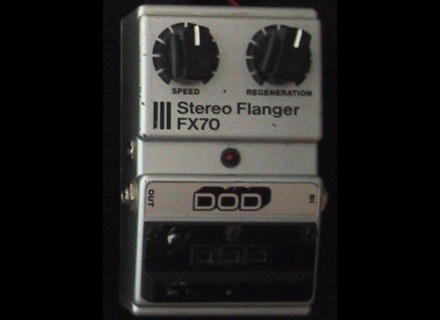 DOD FX70 Stereo Flanger
4
The DOD FX 70 Stereo Flanger is a guitar stomp box that is analog based. It has both a 1/4 inch input and output and both a battery compartment and a power supply jack. It is not a rackable unit as it is a stomp box.

The configuration of the DOD FX 70 Stereo Flanger is just about as easy as it gets. It simply has two knobs - one for speed, and one for regeneration. Since it only has two knobs, it is easy to get a good sound from this, even if there isn't a great deal of versatility available with this pedal. I don't have a manual for the DOD FX 70 Stereo Flanger, and you really don't need it because it is incredibly easy to use.

The sound quality of the DOD FX 70 Stereo Flanger is pretty good, but doesn't blow me by any means. It is good at what it does, which is getting a basic flanger tone. It isn't incredibly rich sounding, but does have a nice warmth to it and does provide and accurate flanger effect. I have only used this pedal with guitar - usually a Fender Strat and a '76 Fender Twin Reverb. However, this pedal is suitable for any instrument you can plug into it. While I have definitely used better sounding flangers, this will do the job if you are looking for a simple flanger tone.

I've been using the DOD FX 70 Stereo Flanger for about two or three years and have found it to be an effective flanger pedal. I would rather use a Boss BF-2 or BF-3 or an Electro Harmonix Electric Mistress over this pedal because they sound better and have more versatility, but for the price, the DOD FX 70 is a nice option. However, if you are looking for a flanger pedal I would probably recommend one of the Boss pedals as the difference in price is not worth the downgrade in versatility and overall sound quality. I would encourage those interested to try out a few different flanger pedals before buying, including the DOD FX 70 Stereo Flanger.
Did you find this review helpful?yesno
»

Other DOD flangers for Guitar