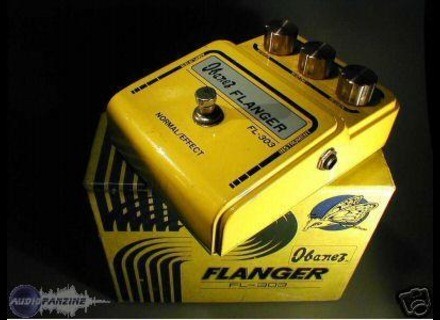 Jumikael's review (This content has been automatically translated from French)

Ibanez FL-303 Flanger
5
Good because this has thirty years, a little history:
it was produced between 1976 and 1979 by Maxon (Ibanez) and has not been reprinted. According to my research, especially on the Ibanez catalogs, it appears that in 1977 under the logo Ibanez, those produced before (after) being stamped Maxon like mine.

For the effect itself:
- It is an analog form flanger pedal
- Three knobs: Speed, Width, Regen
- Metal casing very strong and very pretty
- Operating an LED (not systematic at the time)
- Operates at 18 volts, either by an external power supply or with two 9-volt batteries

I put 10 because it is well built and a pedal that responds to everything you&#39;d expect from a good quality analog effect at this level. Besides, she is still there after thirty years ... Short!

No manual for me, but given the age of the effect this is hardly surprising.

With three buttons to turn, it only remains to discover for yourself the possibilities of the F L-303, not so complicated!
- Speed: Controls the speed of the rotating effect
- Width: depth, reverberation effect
These first two controls allow the latter to zero volume pot to control the side "chorus" effect
- Regen: Regeneration, controls the boost flanger

The push button is the most enjoyable I have had to engage, funny but pleasant surprise.

To put a negative point: the more bulky than standard boss pedal, it will not clutter up the pedal, but hey that&#39;s what (level size is slightly smaller than two bonded TS808).

Taking the most important but also the more subjective test. I use an Ibanez SAS 36 FM with Bare Knuckle pickups crawler, with nice midrange.

Connected, the effect has a good bypass. Start good.

With all the knobs at least, the effect on its color very slightly, in the softening in the manner of a chorus. Using the first two knobs, it emphasizes that side. The resulting sounds are very pure, very pleasing to the ear. It&#39;s like if there were not superfluous, like a lot.
With the volume pot to speed up, we get a very very nice tremolo effect, gaining in depth (logic) with the second volume pot. Really nice.
By manipulating the third knob it accentuates the "metallic" flanger, giving more presence to the effect. Again it is beautiful. I feel that others like the flanger BF-2 Boss japan, or Ibanez FL-9 to appear "rude" next. There is finesse, even when we share in these special sounds (like speed and regen thoroughly it&#39;s been a little flying saucer).

Very complete, with three knobs, against four for most flangers I can get a range of sounds impressive. And especially whenever it makes you want to have fun, everything is usable on it. And there&#39;s always this impression of "purity" of sound, with a highly fluid, sweet to the ear. Flanger is the most musical I know, this does not prevent it, as I said leaving in a little barred sound experiments.

Note that it goes very well with distortion (I use a copy of the Triangle Big Muff), and the effect is enhanced by a good delay behind

In short, I am charmed, I put as much as my "colleagues" of Central Harmony HERE ( http://reviews.harmony-central.com/reviews/Effects/product/Ibanez/FL-303%2BFlanger/10/1 ) .

I use it for two days, but I&#39;m starting to be familiar with the flanger. If by chance my opinion changes I&#39;ll let you know, but I&#39;d be surprised.

I like its looks, its sounds, its solidity. I like the fact that it works less at 18 volts and it takes more space than a Boss pedal.

Well here we are in the "vintage". Some lend qualities to the effects just because they dated before, but the FL-303 is not just a "vintage": its main asset is the sound it delivers, not the thirty years that he has lived. Its price fluctuates between 200 and 300th in the Argus, in general, but you can find it for cheaper.
I will not justify or invalidate these exorbitant prices, because after all, an object has the value at which it is ready to buy.
At least with this, you will have old and good ^ ^

Other Ibanez flangers for Guitar