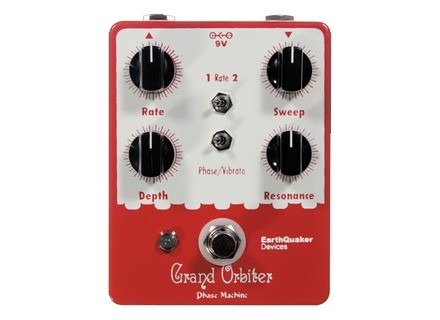 The configuration of the EarthQuaker Devices Grand Orbiter isn't hard to follow and at the same time it has a lot to offer. There are two different rates to choose from, as well as both phase and vibrato modes. It also has parameters for rate, sweep, depth, and resonance, which should seem familiar if you've used phasing pedals before. I haven't had access to a manual, nor have I ever felt I needed one.

The overall tone of the EarthQuaker Devices Grand Orbiter is outstanding. While perhaps it doesn't have the warmth and depth you'd get with a vintage phaser pedals, it still has a very full sound and is capable of achieving many different types of sounds. I love turning it up enough where you can get a little vibrato happening, but where this pedal earns it's living is with the more traditional sort of phasing tones, which are absolutely dynamic. It's a very versatile and flexible pedal, as there are just so many different sounds possible here...

The EarthQuaker Devices Grand Orbiter is definitely a phaser pedal for the experienced player, as it's in depth and has a professional sound, with the price tag to match. You can definitely find more expensive pedals out there, but at almost $200 USD, this one certainly isn't cheap. Having said this, if you're using phasing a lot I would say it's worth it to spend the extra money to have an absolutely awesome phaser on hand for years to come. The Grand Orbiter is a pedal worth being aware of and trying out if you're a phaser pedal fan for sure.
Did you find this review helpful?yesno
»