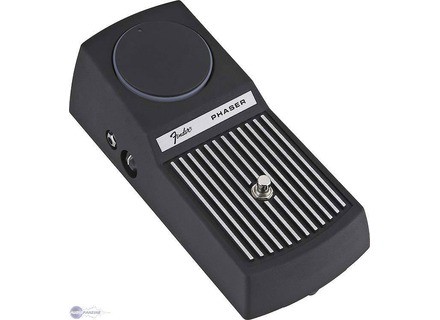 Classics Live Again Though not as well known for their pedals as they are for their guitars and basses, Fender has been making classic pedals for more than 50 years. Following the recent re-issue of the Fender Blender Custom pedal, Fender decided to launch a range of new classic-inspired stompboxes with some vintage tones and looks. Let’s take a closer look…. Read more…

lautricky's review (This content has been automatically translated from French)

Fender Phaser Pedal Reissue
5
This pedal is part of the series of Fender Reissue Pedals is apparently a novelty in France 2008. This is analog phaser is a copy of the 70 models.
Entrance, exit, entrance to a 9V DC. (Battery too)
I put 10 because it is a Phaser, and is asked only to be a Phaser first. Some will want a stereo output, but this phase is already Yours!

Then they said one input, one output, a 9v power supply to start.
Then a switch to trigger the effect, true bypass and more!
And a sort of knob on top for the speed controller of the effect, again, when we play on this wheel, there is a visual effect with LEDs autout I think the wheel is like the RT-20 boss (leslie effect).
Then a knob on each side of the effect, one to control the intensity and to play on the eq.
I have not touched the manual.
I put 8 because access to two pots is super annoying! They are in a sort of recess

TEN !!!!!!!!
So then, pack your Small Stone and MXR you!
No, I'm kidding, but I did try it Phaser, I can not compare. But according to the reviews that I had on those of the EH and MXR Phaser, this one is great!
It costs about the same that took MXR EVH (€ 145 catalog).
Very effective, we get all the sounds you want, slow to very fast, the tone knob is very effective! The range of sound is huge! No breath brought home! Very hot in the clear (after that depends on how you set your amp and your gear). Distortion and it sounds really good!
Personally I love it!

So I tried it in stores for 2 hours, I received mine in a few days!
So it sounds! This is perfect for a Phaser versatile, it can be used with any gear really, I tried it on the lamp like the transistor, on Gibsons, Fender, Ibanez, LTD and it sounded good all the time!
I wanted to try to compare other phases, but unfortunately I could not ...
Then € 145 is expensive, like almost MXR! But it's worth it! To summarize:
The +: Efficient, Versatile, Fender!
The -: Takes up space on my Pedalboard, knob difficult to access

I do not rank in the price + or - because it depends on the budget that we devote to the guitar!

Other Fender phasers for Guitar