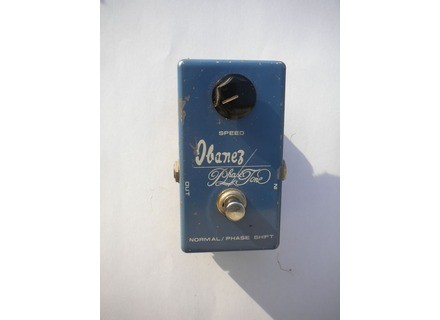 bobycat's review (This content has been automatically translated from French)" A simple and warm analog phaser,"

Ibanez PT-900 Phase Tone
5
We have a phaser Ibanez, manufactured by Maxon in the 70s, the first pedal Ibanez stamped according to my research. No area, just on 9 volt battery, but then it consumes nothing at all, for months I turn with the same battery. Course full analog. An input, an output, a pedal anything.

an on / off switch of course.

Phaser very warm sound, you quickly get to David Gilmour when the speed is low, a real treat, it is may be more discreet about a big distortion but it is no more evil, this effect anyway. I get a great sound with my TS9 82 at his side ^ ^

I do not serve men too high speed, I could not tell if the sound is clean

I also use it with my Roland Juno keyboards are striking, I do not regret my purchase.

3 months that I do not think I separate myself so soon. I had chorus, phaser of multi effects pedal that has the sound I'm looking for here is the most important, right?

I pray it does not let me go ... because it will be difficult to regain. It seems that there is no so emplaires it.

Guitaristdu53's review (This content has been automatically translated from French)" Great!"

The general configuration is it simple?
Editing sounds and effects is it easy?
The manual is clear and sufficient? ...


Like all pedals is quite simple. One branch, it presses the switch, turn the knob and go.
The negative point is made that there is no Hook sector.

The phaser is really good. It can range from mild to very distinctive phaser pink floyd phaser at a very fast (very fast rotation of the sound) that made me think of a sonic youth especially when you add overdrive or distortion.
Personally I use it with a light phaser and a little overdrive it's huge!

I do not use it for a long time, but I already know that I do not trade it for anything in the world.
Certe does not poccède making 9v and suddenly when you want to connect all the pedals of a sudden ba damn it.
But it uses almost nothing, I am on the same 9v for 5 months and it is not my laché.Depuis this pedal has a great little vintage and old school side is unique.
For the quality / price I can not really answer because I could proccuré me this pedal for 5 euros in a jumble, as saying that I was lucky.

To complete this pedal is just beautiful!!!

Prince Billy's review (This content has been automatically translated from French)

Ibanez PT-900 Phase Tone
5
This is a vintage analog phaser in an elegant blue colori very basic but very effective in Ibanez.
Works with a 9V battery, no AC adapter inlet.

Then use the point of view, is simple: a switch and a button to adjust the speed of the effect!
I did not have the manual because I bought it on ebay used (and then to find the manual for a pedal that has more than 30 years is not won!) But it really is not help!

Then of course there is the strong point! From mild phaser hovering at the Pink Floyd in arpeggio or agreement (listen to the effect on the guitar in the song "Cold Brains" by Beck on the album Mutations that is exactly what its there). You can also put a very fast (bottom button) to get a sound very retro 60's ... Coupled with a distortion (ie a ProCo Rat) is a nice effect too, a little at a Sonic Youth or if you set a slower speed would approach it a bit of a noisy Flanger ... For all kinds is also a must.
FYI, I use a Les Paul studio mainly but also with a Fender'62 Reissue Jaguar and a Fender Deville and ampl it sounds!
Namely: the effect also makes good tred on a vintage keyboard (I use an old Farfisa) and also on the voice (speed up) for an effect on the aquatic hovering Sébastien Tellier. (See the song 'Universe' on the album 'The Unbelievable Truth' to get an idea)

I use it for about 2 years and I never sell it! I love that pure, original, and not analog like most chemical phase multi-effect pedals or bad. I like its ease of use. It does not consume much, which is interesting for a pedal that does not have a transformer 9v jack. It is also robust: it took a lot of beer, ash and projectiles of any kind in concert and has no default.
I would do the purchase without hesitation, knowing that in addition, I bought it on ebay to a guy who did not know what it was and that have paid € 50 ...! ! ! Well do not dream too much anyway, usually on ebay, it turns over between 120 and 170 € ...

Other Ibanez phasers for Guitar