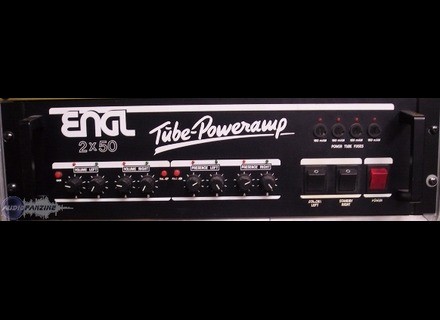 forsakendream's review (This content has been automatically translated from French)

ENGL E920/50 Tube Poweramp
5
This is a power amp tube EL34 2x50 watt stereo.
It is no longer manufactured.
The connectors are numerous, there are 4.8 or 16 ohm output, can connect two preamps, two switchable settings volumes, two switchable settings attendance also feature MIDI (optional, mine did not but some models have)
It also has a gain knob that reduces the volume by 20 db, which is extremely convenient when you want to play without necessarily deforming the eardrums!
Last little detail you can even adjust the fan power in following how the amp is heated!

Very easy to use, it is not a preamp! Just be careful when playing on a channel like me to put in standby the second and also to verify that the baffle is connected to the output channel that is used otherwise to grill the amp ...

Well I play with a preamplifier 570 and a 2x12 cabinet with engl washburn N2 and the sound is huge. the amp is a true war machine and is extremely powerful (do not rely on the 50 watts that does absolutely nothing to say is very, very powerful)
He keeps a very high-precision volume and accentuates the sharp and brutal pre-amp.
But he keeps all his quality in the rendering of sounds clear and crunchy. short is a real treat.
I had also tried with a Pod and a ToneLab démerder and it also make them sound divinely (I prefer it in fact largely from a sound system, at least for the metal)

I use it for some months, first with the ToneLab and now with the 570.
What I like most is probably its great clarity, accuracy, dynamics, even at extreme volumes. The higher up the sound, the more it becomes good.
What I dislike: its weight and size (15 pounds and 3 units!)
There is unfortunately no longer manufactured, I had to find it secondhand and I do not regret the purchase. I tried to marshall EL34 Poweramp, and a good one is not in the same category with Engl.
I should soon be able to compare with a VHT Poweramp but my gut tells me that the difference must not jump to the ears ...

ENGL E920/50 Tube Poweramp
5
EL34 2x50 watts, with 2 lamps per channel.
Jack connectors, classic, including a footswitch.
However it is a bit more complicated than the 840/50 because of the versatility of its potential output and input.
Swich a gain to boost the volume is available in front, and there, it kills germs.
Inputs: two preamps available, and each in stereo with front switch or foot pedal.
Outputs: this is where it gets complicated, and it is best to learn or know something about it before plugging the wrong exit. It has two outputs 16ohms left / right for two cabins 16. One in four 8ohms output left / right to either 8 in two cabins, four cabins 16ohms. And finally we have four outings 4ohms left / right for two cabins 4ohms (which is rare) or, and this is very interesting, 4 cabins 8ohms. Example, imagine that you are working in stereo with two cabins 8ohms buttocks and want to return two mini cabins like an HP 8ohms at your feet. That's what I practice and that's nice, it avoids putting too strong for each other and attacking his classmates live or in rehearsal. " The principle is the same with trips 8ohms with cabins or HP alone 16ohms .. I remind qq basic principles: two cabins 16ohms in parallel require 8ohms load (without going into details), and two cabins for 4 ohms 8ohms load.
There is also a Write out I did not understand the use today, especially since I do not use it.
And finally, there is a switch for the fan speed depending on the intensity of use of the machine.
Only flaw, it is a bit ... mastoque large (and heavy, which is normal due to the configuration and quality of manufacture)

Simple enough, but because of the generous connectivity option, a small doc is welcome, available in PDF on the ENGL site.
To get a good sound, it's so simple ..

It is ideal for sound I am looking for prog-rock, hard rock, heavy, blues ...
Gibson Les Paul in micro T500, a MusicMan Luke in EMG85, DiMarzio Paf Pro in Silhouette and Lespaul in EMG85 and EMG81.
Sources: GT5 Boss, Boss GT3, Pod Pro, JMP1 and preamp outputs for Marshall Mosfet Lead 100 head and 8100RH .. And all the sounds are accessible: the lens to nag fenderien trash through the Marshall vintage .. It asks only to return what you put him in entries.
EL34 is the good quality .. thank you ENGL

1 month in addition to its little brother the 840/50 ..
Everything is good in this pig!
I have tried many amps and combos stack, lamps, transistors and hybrid ... and there is very convenient when you want the stereo with a nice sound.
At current market prices ARGUS is a gift.
A bit skeptical in terms of volume, initially, I gladly would do this choice because of the quality of the beast ..