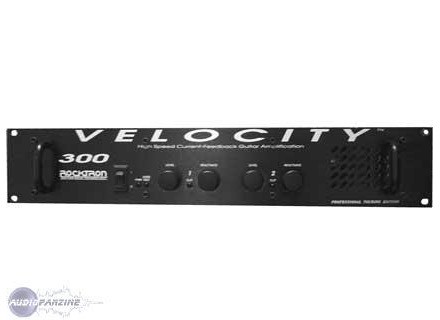 Dialing it in is VERY EASY! A volume and reactance control per channel!
You connect one or two preamps and your speaker(s) and there's no impedance problems, it's automatic (which is perfect because you don't run the risk of toasting your amp)!
CAREFUL: In bridged (mono) mode you shouldn't use a speaker of less than 8 ohms
The manual explains very clearly all connection possibilities.
The sound? It's easy to make it sound, but it all depends on what you connect into the inputs and outputs. Personally, I use a Mesa Boogie Triaxis and they make a good couple!
No presence control, unlike on the newer model, but it's not that bad, you only need to readjust your settings directly on the preamp.

I play mainly metal and it's perfect together with the triaxis.
It's impressive as soon as you crank the reactance all the way up, it has that smooth "tube" sound, the lows can be sometimes too present and force you to readjust the settings.
Nevertheless, the amp remains very neutral.
The sound is excellent, it's hard to get a better tube sound at this price point while still having a proper sound at low volumes without the need of a power attenuator.
The headroom is large enough!

I've been using it since January 2013, bought it secondhand for $300 and I think it's an excellent value for money! Besides, there's no need for maintenance, which my wallet will appreciate!
I didn't test any other power amps and I turned towards this one due to my limited budget! I don't regret my choice at all.
Did you find this review helpful?yesno
»

Rocktron Velocity 300
5
It's a solid-state power amp with tube simulation. It's a 2U rack design, manufactured in the US in the '90s.
It can be used in stereo (up to 2*150W) or mono (up to 300W). The output power depends on the impedance of the speaker connected.
Connections and controls:
Rear: 1 input and 2 outputs per channel. 1 mono/stereo switch
Front: On/off switch, Level and Reactance for each channel; power LED, clipping LED per channel, over voltage LED. According to the manual, it's almost indestructible. So much the better.

In short, it's austere, but with all the basics. A power amp doesn't need anything more....except maybe a Presence control.

It's very easy to use: You turn it on, turn the Level control and it rocks!
I looked at the manual on Rocktron's website. As usual, it's clear, detailed...
and it explains well the technology used in the amp. In fact, it's not a "normal" solid-state amp. I'm not a pro in this domain, but it's nevertheless nice to know how the things you use work.

The most important point!
In this case, we need to compare the sounds this amp produces with those of a tube amp to see if the "emulation" works as indicated.

With Reactance set to 0:
I had to review the settings already! It sounds good as a pure solid-state amp. But the advantage, compared to tubes, is that it will work fine even at low volumes. In that sense, there's no discussion!

With Reactance set to max:
The sound is closer to a tube amp, it's pretty impressive. The sounds gains depth, "smoothness," thickness... Again, you can get a typical tube sound at low volumes.

The sound is supposed to get better as you increase the volume. I'll tell you if that's true after tomorrow's rehearsal

Update: 11/22/07:>
OK, I tested it during two rehearsals with my two preamps... It sounds f**king amazing. I noticed that you need to adapt the reactance depending on the preamp connected. With the Tubefex, it's enough to set the reactance halfway to get "the sound." However, with the Piranha, I had to set it to max...

I just got it today. I'm under its spell!
It has plenty of advantages:
- No maintenance because it's solid-state.. I don't want to spend any money on tubes (even if it's not that often). In this case I know it will always work.
- Voltage overload protection circuit, anti-"pop" system when you turn it on, the fan starts only when needed... In short, it's well thought-out as a whole.
- Lighter than my Classic 50/50 which breaks my back in its rack.
- Solid: I had never seen such a thick metal unit.
- The Reactance pot, which allows you to make sound vary a lot. I actually ask myself if I'll ever use my other power amp again, since I can easily get a comparable sound.

The cons:
Still looking...
I just got it, so I can't be too objective, but I haven't found anything bad right now...
I give it 8, but I will review my mark later.
Did you find this review helpful?yesno
»