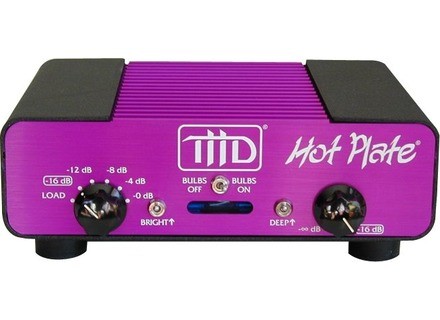 Thd Hot Plate
4
One of if not, the most popularized attenuators out there to date. Plug it in properly and you'll be able to crank the snot out of your tube amp and control the overall volume level with the hotplate. This enables you to of course get that great tube saturation at bedroom levels. It's a very simple to use device and doesn't require much, it's really only got one knob and one or two additional switches.
Tonally it is supposed to replicate what a cranked amp would sound like, though in my opinion it replicates more of what a cranked marshall would sound like. This being said, THDs seem to sound great with marshall amps for some reason but everytime I try it with another amp it just doesn’t sound like how I’m used to that amp sounding when cranked. I can’t say why or how but it the THD just seems to give off a more vintage tubey tone all together. I think this is the reason for other revisions of this hotplate being produced by other companies and such. Also feature-wise other companies have upgraded it, some all in one type that allow you to hook it up to any OHM configured amp/head/combo rig.
Though overall, it’s a good product. If you’re a one-amp type of user and just want to get a good bedroom level tone this would be worth looking into. Yes it’s a bit pricey, but compared to when it first came out it’s gotten cheaper. Though personally, I find no use for it these days. As these days most modern amps have decent and usable tones at low volumes. However if you’re got a vintage amp that you haven’t been able to crank and rock out with since your last gig in the 70s in Madison square garden, this is what you want!

loudfunk's review"Amp sounds great at levels louder than you can use...this is the fix for it."

Thd Hot Plate
5
We all know that tube amps sound best cranked, and we all love big amps because on a 100 watt amp that bottom simply sound much better than on a 10 watter.
Unfortunately once you get those amps to levels where the power stage actually starts to “breath” it gets loud. Loud enough that your band mates will bet angry, and the sound man will take you out of the mix.
This is where attenuators come in, they take the amps signal from the speaker tap and dissipates it into...well hot air.

The layout is simple, on the back you have 4 1/4 inch jacks. They are input from amp, speaker 1 and 2, and line-out plus a line out control.
Up front you have a 6 position stepped selector switch, which attenuates the signal down from bypassed (labelled 0dB attenuation), in 4 dB decrements. Once you get to the -16dB setting it will bring the continuos control on the right into play letting you gradually go from 16 dB of attenuation down to a whisper. Side effect however is that if you’re attenuating that much the amp’s interaction with the speakers are gone and the tone becomes anemic. So, I wouldn’t suggest this for bedroom usage but rather to tame a loud amp.
In addition to this you have a bright and deep switch to inrease the frequency you loose when turning down. Same concept as your car stereos loudness button at work here.

Now if you’re needing a very quiet volume out of your loud amp the 6th position of the attenuation dial...LOAD is where you want to be. The just send the line-out to a power amp, effects return of another amp or into your recording software with a speaker simulator plug-in and you’re good to rock that amp at whisper volumes with great tones.

Thd Hot Plate
5
The THD Hot Plate (8 Ohms version) is a unique device which allows you to exert the full power of your tube amplifier without being too loud.<span> </span>It is main for the player with a tube amp, and those of us who have them understand that they sound at their best when they are turned up.<span> </span>What the Hot Plate allows your amp to do is to achieve this sound without blowing out the room, and is especially useful for playing in smaller sized clubs.<span> </span>The unit has ¼ inch connections and will fit nicely on top of your amp, as it isn’t rack mountable.After you’ve got the THD Hot Plate all plugged in and good to go, using the unit isn’t too hard.<span> </span>This isn’t to say that set up is hard either, as it only takes some simple connections between this, your guitar, and your amplifier.<span> </span>The parameters that you’ve got to work with include load, volume output, as well as switches for deep, bright, and a selector to have the bulbs either on or off.<span> </span>I don’t think that a manual is necessary, although I haven’t seen one so I can’t say anything about its make up.Let me start off by reiterating that the THD Hot Plate is only for tube amps!<span> </span>It shouldn’t be used with a solid state amp, as it would serve no purpose.<span> </span>Also, there are a variety of different versions of the Hot Plate, I believe ranging from 2 ohms to 16 ohms.<span> </span>The amp that I have used the unit with is a 1976 Fender Twin Reverb, which requires the 8 ohm version, but different amps will require different amounts of ohm age.<span> </span>The THD Hot Plate does exactly what it advertises to do, and really doesn’t add any sound to your signal, it just harnesses the power of your amp to create its best tone possible…While the THD Hot Plate isn’t the cheapest unit in the world, if you’re looking to get maximum power from your tube amp to get that incredible full tube sound in all its glory, it is definitely worth it.<span> </span>Overall, a very cool product and a great idea from THD here…

Odieux Fonzy's review (This content has been automatically translated from French)

Thd Hot Plate
2
I tried this on a vintage Marshall stack consisting of a head 100W JMP Master Lead 2203 1981 Mark II and a 4x12 cabinet 1960A of the JCM 800 series dating back to 1984. This t you possde a master volume, but I wanted to hear the sound obtained by saturation of the single power floor without becoming dull, hence the need for a hotplate! (As everyone knows, the audio obtained by saturation of the power of a tube amp tage is in general much more musical than the saturation of a prampli.)

Difficult Pre-Trial: we find HotPlate Paris in one store, where he did not t possible to get a demonstration on their hardware (though one day c'tait week without busy). D'o Plan B: I command in Germany by mail order, with a guarantee as possible unconditional return within 30 days.

First finding dballage, the device seems robust and well finished, with a fan placed in the box. Note that the HotPlate is purely passive, the ncessaire energy to spin the fan is prleve the one he used dissipate.
(For Dtail of rglages available on the beast, refer to prcdents notice.)

I think after a testing week with:
- A Fender Stratocaster american vintage '62
- A Gibson Les Paul Standard
- A Blade RH4 Classic
- A Blade R4

* The sound of low attnuation (say up to - 12 dB) is not bad at all, quite transparent, but it is not used in a non-isolated house if we has neighbors, the volume produced is much too strong. on the other hand, it is undoubtedly very useful to use a 100W monster with a rock band on a small scene or in a bar.

* To use the Marshall presqu self bottomless at the neighbors immediately call the police, attnuation must be practically pushes its maximum, and the resulting sound is extr armament compress quite unpleasant, and whatever the equalizer attempt made on the amp or the boiboite.

In conclusion, this machine has little prs no intRet for home-studio owner who wants to save his amp with a mic (I HotPlate accuracy of all here that has a line out for those who like). This machine did not of intRet for the guitarist who only wants to play "in his room," a much better sound obtained by saturating the prampli and adding an overdrive pedal (for me, a Boss OD-1) to sustain. The HotPlate logically retourn with his expditeur for reimbursement ...
Did you find this review helpful?yesno
»
Read the 10 user reviews on the Thd Hot Plate »