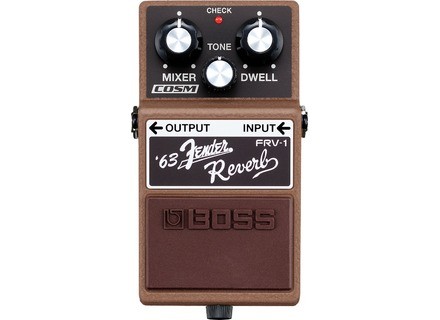 Boss FRV-1 '63 Fender Reverb
5
This pedal digitally reproduces the classic tones of the original 63 Fender Reverb unit. The unit although sounded amazing is powered by tubes and can be somewhat cumbersome and high maintenance. Fender went to Boss and said 'Hey bro, let's make this in pedal form' well OK don't quote me on that, but that is what happened and Boss built Fender's 63 Reverb pedal.

My usual expensive 'Yeah I'd like to try this out' pedal shopping extravaganzas. Regularly $129 I was able to score this on sale for $100.

It's a simple no nonsense pedal. It can really add that pocket full of sunshine you hear on the old Beach Boys records.

The three simple knobs on this pedal are Mixer, Tone and Dwell. Mixer decides how much reverb you are sending out, Tone is a standard treble roll off tone knob like your standard guitar's tone know and Dwell acts as a sustain knob.

With the old reverb units every time you tried to move them you'd hear an ear piercing exploding sound from the springs rattling. Well you know what it really is not a problem with me that this pedal doesn't do that, nor can I think of any other negatives.

Your regular awesome Boss quality construction you have grown to learn, love and rely on.

The Boss Fender 63 Deluxe Reverb pedal sure doesn't top the old tube Reverb units, but it makes life a whole lot easier and sounds great too.

Boss FRV-1 '63 Fender Reverb
4
A classic reborn — the legendary sound of the 1963 Fender® Spring Reverb returns as a modern stompbox. BOSS and Fender® USA have collaborated to create the FRV-1, a stunning recreation of the legendary ’63 Fender® Reverb via COSM technology. The FRV-1 puts that timeless tube-driven reverb sound under your foot in a tough, reliable compact pedal.

A timeless classic — the Fender® Spring Reverb is the sound that launched the surf-music phenomenon, and is a staple of rockabilly, country, and blues. Later, it became commonplace in grunge and other modern genres. Now the same legendary sound can be had in an affordable, rugged compact pedal.

This is a relatively new pedal, boss' attempt at recreating a classic fender '63 reverb tank. Housed in the classic compact boss single sized pedal, with no more than what? 3 knobs. Of course, the usual with boss. Simplicity so you can just plug in and play!

Simple with the 3 knobs dwell, tone and mix. Tweak'em all till you get that classic springy 'verb sound that you're used to hearing from a '63 tank.

Now, i'm not a BIG reverb user. But I do seldom use reverb and sometimes there's good sounding reverb and bad sounding reverb. I'll try to generalize for the common people who aren't tone purists or hardcore reverb users. A good reverb is something that doesn't generally alter your original guitar signal, but also sounds pleasing, with a sort of warm vibe and not sterile or thin etc. This is of course, the effect that I'm talking about, that 'hallway' effect. Some bad reverb effects sound like, they're not even there or working or audible, or that that 'hallway' effect just lacks something and sounds 'cold.

I do know a player who told me that he no longer takes out his actual '63 reverb tank because he has this pedal. That's how good this pedal supposedly is. So it's gotta be good! right? I think it sounds great for all the surf stuff, definitely. I always get a kick out of playing the james bond theme as well.

I think fender is definitely onto something with their newly released COSM-like pedals. This is one of them of course and sounds convincingly good! I would definitely look into this pedal if I were in search of a good reverb that reminded me of an older '63 fender tank.

I have always been that snobby kind of guy who stayed away from boss pedals in general. Besides maybe the giga delay, I have never really played a boss pedal I liked very much. However, due to the curious lack of *budget* reverb pedals that seem to be on the market, I recently decided to try the Fender Reverb pedal boss offers. The first thing you realized about the frv-1 is how simple it is. I don't know about you, but 3 knobs on a reverb pedal is a relief coming from a guy who just spent a week messing with an eventide space echo. You literally get a mix, tone, and dwell control. Honestly I don't even think the tone control is all that needed. But it doesn't hurt. Boss pedals, for all my gripes about them, are pretty well made. I really wish they had switchcraft style switches or something, but beggars can't choose I suppose.

I actually have the honor of having a 68' Fender Blackface 4x10 to compare this to. So that's a plus. I'm aware this is based on a 63 fender, so I'm not going to expect it to be an exact replica or anything.

Now let me be clear here when I say why the actual blackface reverb is better to me. The blackface has that sparkle and depth you can only get from a real reverb tank. There's just something highly organic about a 40 year old reverb unit that you will never be able to model in a pedal. It's a shame but I'm admitting it.

Here's the good news. The boss is way clearer and less noisy. With the original blackface reverb you lose a lot of fidelity, which isn't always a bad thing, but I think the boss is less "lo-fi" in a good way sometimes if you catch my meaning.

So for complete authenticity, I give it a 7. For getting the job done the right way, I would say an 8 or 9 is in order. It sounds good.

I'm shocked at how good this pedal sounds. Boss is really onto something here. It's a good deal for a classic sounding reverb folks. Get on it. As far as other reverbs in this price range, I have tried most of them and this is probably the best unless you want something more wacky sounding.

Boss FRV-1 '63 Fender Reverb
4
The BOSS FRV1 is a more recent offering from the company that uses COSM amp modeling to try and recreate the iconic clean and semi gritty tones of the famed Fender Deluxe Reverb '65 amplifier. This pedal not only claims to alter the tonal structure of your sound, but it also contains within it reverb and vibrato effects too in one closer step to the original amp. It's housed in a fairly standard BOSS chassis and has controls for gain/volume, EQ adjustment, and reverb/vibrato. It's able to run off of a battery or an adaptor like nearly all modern BOSS pedals in this format.

Setting this pedal up for good tones is pretty simple. The interface is easy to understand and navigate, and I had no issues with dialing in sounds. It's a surprising little pedal for sure. Though it'll never replace a genuine DRRI combo, it does a good job at some killer Fenderesque cleans or as a mild booster to push an overdriven amp even further. I particularly liked using it to augment the tone coming from my amplifier for a totally separate tonal colour that I could add to my palate.

Where this pedal is meant to sound like the Deluxe Reverb, it does best at taking a standard clean sound and transforming it into a quasi Fender. It has a nice natural compression that is surprising and the way the gain breaks up is fairly convincing. I particularly liked using it with a Strat for some classic funk, blues or surf textures. It goes from fairly clean to mild gain type tones which is a definite plus for versatility. The onboard reverb and vibrato sound fairly good for being emulations, and they are certainly a nice pair of extra features that bring the pedal a step closer to tonal truth.

All in all I think the BOSS FRV1 is a cool little pedal that has some classic blackface type tones on hand for not a lot of cash or space. At about $150 new these pedals are reasonably priced and have the unmistakable BOSS look at feel backing them all the way. If you want a decent "Fender in a box" you really cannot go wrong with this pedal. Definitely worth a second look for sure!
Did you find this review helpful?yesno
»
Read the 12 user reviews on the Boss FRV-1 '63 Fender Reverb »

Published on 08/13/09
Boss and Fender USA have collaborated to create the FRV-1, a recreation of the 1963 Fender Reverb, described as "a staple sound of rockabilly, country, blues, surf rock and even grunge rock."

Other Boss reverbs for Guitar