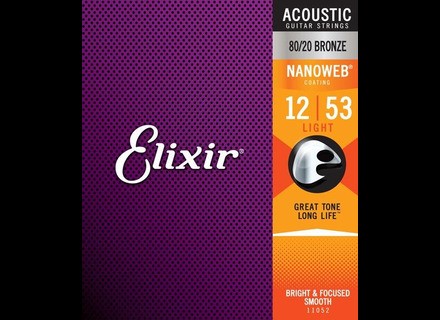 efabric's review (This content has been automatically translated from French)" Good ropes but chres!"

Elixir Strings Nanoweb Coating 80/20 Bronze Acoustic
5
I mount these ropes, pulling "light" on my 12 string forty years, just not too hard to force the voltage handle. I bought this secondhand guitar, and strings were rinsed, badly mounted on it.
After having adjusted r-mount in the right direction, wound properly, defeated the nodes of the origins strings that crossed over / under, I offered my Japanese a new game. Because it's worth it!
Since then, I have no problem with keeping agree, albeit mostly of adjustment and string tension during assembly.
The guitar sounds much fairer, though the intonation is false slightly on this guitar. It may be of the bridge saddle. In any case it is far better than before. I always had a dcalage between the main rope and chanterelle in the treble. It's finished. The guitar has almost lost his "chorus" natural so the strings do "fight" more. The accuracy is slamming too. To see if the sound is not mattifies slightly with age. I hope that these cords will age slowly, as suggre marketing!
Did you find this review helpful?yesno
»

Tin-Man's review (This content has been automatically translated from French)" Excellent Rolls ..."

I tried a bunch of strings at a time I used a lot the Adamas (on an old Ibanez 6-string which sounds really good).

Most of these cords and obviously the life. As for me, I not oxidize strings, I'm lucky not to 'sweat' fingers and be very careful with my equipment, so a wipe over after playing, over and under the strings on the box ... and occasionally a little bit of fastfret (I like the smell ... mouarf ...).
+ + The trick really is that their sound improves with time. Up when we see the difference with medium to another (good) set of strings, and then (you can test for those who have several acoustic) by comparing two guitars on nearly identical, we realize Elixir that become brighter and better defined with time, which is not the case other games without coating.

Without making pub, and then I haves for musicians, a Taylor and a game Elixir, one key to happiness. I just miss the Taylor ...

Value for money, well it is a bit abused, but lately, it seems that prices are revised downward (although this is Chero ...)

efabric's review (This content has been automatically translated from French)" Good strings, but expensive!"

Elixir Strings Nanoweb Coating 80/20 Bronze Acoustic
5
I mounted the ropes, pulling to "light" on my 12 string for about forty years, history of blood not too hard to force the handle. I bought this guitar secondhand, and ropes were rinsed, mounted over evil.
After having re-adjusted, mounted in the right direction, properly wrapped, defeated the origins of knots ropes which crossed over / under, I gave my Japanese game nine. Because it's worth it!
Since then I have no problem holding agreement, although this is mainly due to the adjustment and string tension when fitting.
The guitar sounds much more correct, although the intonation is slightly wrong on this guitar. This may be due to the bridge saddle. In any case it is far better than before. I was always a gap between the main rope and chanterelle in the treble. It's over. The guitar has almost lost its "chorus" natural so the strings do not "fight" more. The accuracy is there, slamming too. To see if the sound does not matifies somewhat with age. I hope these ropes grow old slowly, as suggested in the marketing!
Did you find this review helpful?yesno
»

BlueChris's review (This content has been automatically translated from French)

Elixir Strings Nanoweb Coating 80/20 Bronze Acoustic
4
That's it, I decided to try the famous string Elixir I hear about in the forums .... AF
After 15 days of use on my Seagull:
the +: Crystal clear sound and brighter
The facilities are quiet and dragged by ropes coating
The lifespan of the game, and the fact that the strings retain their characteristics.

the -: The price (€ 20 to the game .. ca quiet!)
Low a less
The affected different, especially figerpicking (maybe just a habit!)
The holding of agreement less reliable over time

Well at least I tried, but I think I will stay in pulling the same, true to D'Addario.
Although the life of Elixir looks promising, the price difference (and his!) Does not seem justified ...

Did you find this review helpful?yesno
»
Read the 7 user reviews on the Elixir Strings Nanoweb Coating 80/20 Bronze Acoustic »